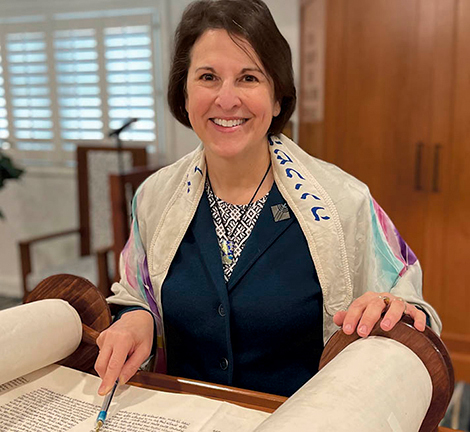 A pastoral care specialist, social activist, speaker, author, presenter, and photographer. And on top of all that, a rabbi! That’s right, there’s a new rabbi in town. This septuple-threat is Seaside Jewish Community’s first full-time religious leader in its 25-year history. As of January 1, Rabbi Julie Hilton Danan is the new rabbi in town.

Who is this woman of God, this teacher of Jewish wisdom, who has taken over the rabbinate of Rehoboth Jews?

Let’s start at the beginning. As a child, the precocious Julie dreamed of being the first woman rabbi. She was beaten to it (by a lot!), but that didn’t stop her. As she grew into a young woman, Jewish education became a huge part of her life.

Rabbi Julie studied Jewish literature and culture in college. Her dissertation from the University of Texas at Austin was on rabbinic uses of the term, “Ruah ha-Kodesh” (the Holy Spirit) and the feminine nature of the Divine Inspiration. Rabbi Julie is the author of the Jewish Parents’ Almanac, as well as articles and book chapters on Jewish life and education.

She and her husband Avraham have four daughters and one son, so gender studies in relation to the Jewish faith stay with her to this day. When she became a mom, she began taking a more holistic view of the Jewish faith. As she is fond of saying, “Having kids opens you to protecting all kids.”

SVARA is a “traditionally radical” yeshiva dedicated to the serious study of Judaism through the lens of queer experiences. Its leader, Rabbi Benay Lappe, calls her school the Queer Yeshiva. Her studies in gender were meaningful to Rabbi Julie; she took classes there.

Rabbi Julie is the founder of Wellsprings of Wisdom, a virtual retreat center where ancient Jewish symbols from nature become gateways to personal growth and action. She has taught for synagogues, interfaith groups, universities, and seminaries. Her role is not just passing on information, but bringing wisdom to people’s lives. Her philosophy: “God gives you treasure; a rabbi shows you where to dig.” One of those treasures can be found in CAMP Rehoboth. After just a few months she has joined them, seeing it as a great way to embrace the Rehoboth community.

She has lived and taught in San Antonio and the Texas Hill Country, Israel, Northern California, and the Hudson River Valley of New York. Rabbi Julie has brought something with her from each place. But why Rehoboth? Why here?

Rabbi Beth Cohen, Seaside’s first part-time religious leader and now their Rabbi Emeritus, told her about the job. After a long process of interviewing, she was hired to be rabbi at the beginning of the new year. So, Rabbi Julie and Avraham packed up their New York home and moved to Rehoboth.

There were other reasons to become the first full-time rabbi at Seaside. The thing that attracted her the most was the opportunity to play a part in the growth of Seaside. Twenty-five years ago, Seaside was holding seders in a deli for about 100 people. In 2019, Seaside was renovating its Rehoboth building, and by the end of 2021, Seaside’s congregation had grown to more than 600 members.

Seaside is also actively involved in the Rehoboth community, making it even more attractive to the activist rabbi. It continues to maintain strong relationships with the local faith houses and remains an unaffiliated, egalitarian, and inclusive rabbinate.

Plus, it’s by the beach!

As a social activist, Rabbi Julie has a goal to address the trauma of antisemitism. She also points out that not all Jews are white, a starting point to examining the true diversity of her faith.
Rabbi Julie is sometimes referred to as the Nature Rabbi. She finds her inspiration in nature as well as in ancient texts. She feels that it’s important to live in harmony with nature, and that one can find one’s spirituality in the outdoors. Not surprisingly, Rabbi Julie enjoys running, hiking, snowshoeing, and yoga, as well as her new passion for nature photography, which she shares on Instagram @wellsprings.

Rabbi Julie brings so much: enthusiasm for and about the community, a willingness to engage people on today’s issues, a focus on nature and the environment. But most of all, her work at Seaside continues her lifelong mission as a rabbi…to always treasure what it means to be a teacher.

Baruch Haba is usually translated as “Welcome,” but literally it means “Blessed is the person who comes.” We bless you, Rabbi Julie, as you bless us. Welcome. ▼