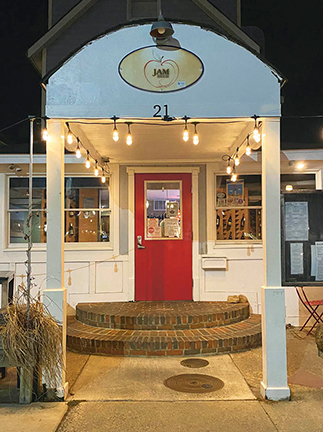 A Trip to JAM Bistro

It’s a Thursday night in downtown Rehoboth. We’re really hungry. We don’t want to go to our tried-and-true restaurants on the Rehoboth Avenue strip. So, we hop on over to Baltimore Avenue and head down toward the beach to Eden. Then east of Eden, we find James Dean…oops, wrong reference. East of Eden, we find Eden’s sister restaurant, JAM Bistro.

Established in 2010 by restauranteurs Jeff McCracken and Mark Hunker, JAM Bistro offers tasty food and great service in a pleasant atmosphere. The first thing my wife Sally and I noticed when we walked through the door were the interesting wine racks, creatively mounted on the walls behind the host table. The cozy surroundings make you feel welcome right away.

As soon as we took our seats, we noticed music playing quietly in the background. Ample track lighting lit the room just enough to read the menu but not enough to burn our eyes! Bar patrons were having a great time, with many being regulars—the perfect sign of a good bar. There is also outdoor seating when weather allows.

As for the service, we were delighted by our servers Kim and Cara, who were friendly, knowledgeable, and in Sally’s words, “just plain adorable.” In an interesting twist on usual restaurant service, both Kim and Cara teamed up to serve us. We never had to wait for attention throughout dinner. Clearly, they wanted us to have a great experience, and we did.

JAM specializes in organic ingredients that are locally sourced. They also boast vegetarian-friendly, gluten-free options for their lunch and dinner servings.

After agreeing that we could happily have ordered everything on the appetizer menu, Sally chose the chicken wings, with a spicy dry rub and apple bourbon barbecue. I selected the panko-crusted calamari with chimichurri, charred lemon, and Parmesan.

Sally’s wings came in the form of six drumettes, which were huge and meaty. The apple bourbon barbecue was a nice complement to the tender chicken. But the real treasure on her dish was the cole slaw made with a touch of bleu cheese. Most restaurants (including the good ones) treat cole slaw as an afterthought, stuffed in a tiny container on the edge of the plate. Not here. The cole slaw at JAM Bistro was terrific. Even though it was on Sally’s plate, we had a furious fork fight to see who could claim the most of it.

Parmesan cheese made its way on to my calamari, and the flavor was a perfect partner to the tender pieces. Calamari tends to have a chewy consistency, so this was a real treat.
One of my pet peeves at most restaurants is that the dinner comes during the appetizer or well after it. We were delighted that our meals came out right after our appetizer plates were cleared. Not too early, not too late. Bravo!

For dinner, we had many mouthwatering choices. What to do?

Sally chose the chicken cordon bleu, a Tasso ham-wrapped, Gruyère-stuffed chicken breast; whipped potatoes; shaved Brussels; and Dijon cream sauce. There would have been another fork fight, but I ordered the braised boneless beef short ribs with heirloom baby carrots, peas, pearl onions, fingerling potatoes, and braising jus, a sort of legend at the Bistro.

Both of us marveled at how tender each of our dishes was. Sally particularly liked the ham wrap on her chicken and the side of shaved Brussels. The short ribs were just right, pull-apart meat with very tasty au jus, and vegetables done right, not over- or under-cooked. The dish included smashed fingerlings. Crispy on the outside, creamy on the inside. Perfect.

JAM Bistro is located at 21 Baltimore Avenue in Rehoboth. Their off-season hours are Sunday 11-9, Wednesday and Thursday 4-9, Friday 12-10, and Saturday 11-9:30. They are closed Monday and Tuesday. Watch for their new restaurant, Red, White, and Basil, joining JAM Bistro and Eden this spring.

JAM Bistro is a real treat. Excellent food and great service in a pleasant atmosphere. Come see them as soon as you can! ▼

Michael Gilles is a  playwright, actor, and director from Milton, and a regular contributor to Letters from CAMP Rehoboth.