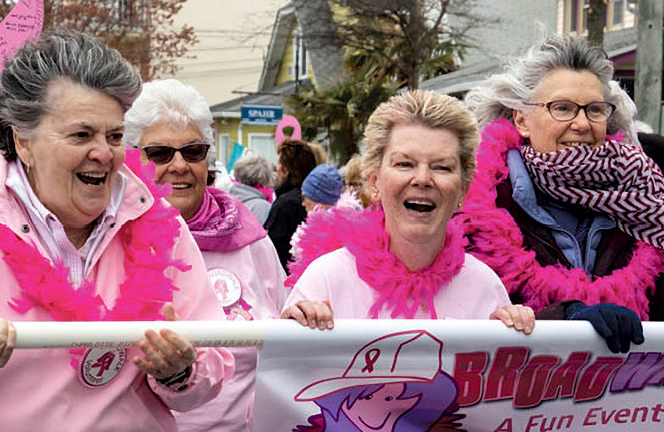 It’s taken over two decades for an idea born of fear, frustration, and tragic stories to turn into a joyous four-day festival celebrating more than 20 years of bringing women together at the beach.

When CAMP Rehoboth’s Women’s FEST kicks off on Thursday, April 7, the event celebrates more than 20 years and the societal changes in attitude and legislation achieved for the LGBTQ community during these past two decades. The FEST, mirroring society, has grown and changed with the times. For 2022, it’s a time for camaraderie, nationally known entertainers, education, sports, speakers, and fun.

But back in 2000, prior to marriage equality laws, there were too many horror stories. Area women could lose everything they owned because they lacked the proper legal paperwork to claim their rights to homes or bank accounts after a bad romantic break-up or the death of a partner.

Too often, a grieving, long-time partner would be left homeless and helpless as parents or siblings of the deceased swept into town, claimed the home, and evicted the partner. This happened more than most people realize.

Likewise, in 2000 there were far fewer LGBTQ-welcoming medical practices. Many women avoided doctors or screenings for fear of coming out as lesbian to providers. Sadly, this reticence to seek treatment sometimes led to tragedy.

To try and help halt these horrors, at the turn of the millennium a handful of women worked with CAMP Rehoboth, the LGBTQ non-profit service organization on Baltimore Avenue in Rehoboth Beach, to get something started.

What Did These Gals Do?
In April 2001, nine women volunteers, this author among them, put together a half-day event hosting speakers on women’s health, financial planning, and legal protection for lesbians. The speakers provided advice and identified gay-friendly resources for women whose fear kept them from taking actions they needed for wellness and security.

Now-retired attorney Ellen Feinberg says, “At that time, in Delaware, there were absolutely no legal protections for lesbians, and many women did not know what legal paperwork they needed to protect themselves, their relationships, and their finances.”

That first morning conference, upstairs at the Rehoboth Library, saw 75 local women packed into the small space, eager to hear advice specifically pertinent to their lives.

They learned about mortgages with “rights of survivorship” so the family of a deceased partner could not claim the couple’s home; they learned of medical practices which treated gays and lesbians with respect; they learned from medical and financial professionals how to find the resources they needed.

Her speech was about women in politics, without a single mention of the word ‘lesbian’ or the LGBTQ community. “But she came to us to speak,” a committee member said, “and for that we were thrilled.”

Leslie Rogan recalls over 200 women attending that second year, which, along with Governor Minner, included nationally-known 1970s activist and musical icon Margie Adam. “Actually, it was 236 people attending,” Feinberg adds, “not that I was counting,” she says, smiling.

Following that weekend, Feinberg and Rogan, and friends Barb Fischel and Wendy Grooms, formed an entertainment committee to find performers willing to come to Rehoboth. “We started by looking to see which entertainers were booked on Olivia’s women’s cruises,” says Leslie.

“We really had no idea about producing; we were flying by the seat of our pants,” Feinberg recalls.

By 2004 word was out. Women converged from Virginia, DC, New Jersey, and Pennsylvania to hear women’s music pioneer Cris Williamson, with the event drawing the largest crowd yet.

Bigger and Better
As news spread, agents and entertainer reps reached out to CAMP Rehoboth with inquiries from their clients. Over the next few years well-known lesbian comics Kate Clinton, Vickie Shaw, and Karen Williams appeared, along with songwriter Tret Fure and famed singer Holly Near.

When the iconic women’s travel company Olivia came onboard as a sponsor, many, many local women learned about the company and signed up for their all-women Caribbean cruises, where they could mingle with gay women from all over the country.

On one cruise, as a swarm of women posed for photos in their REHOBOTH t-shirts, a bystander asked “What’s Re-Ho-BOTH, a sorority? A church? A college? What is it?”

Linda Kemp, Olivia’s director of strategic sales and marketing, answered, “Rehoboth is a gay-friendly beach town in Delaware where all these women are from.”

“But where’s Delaware?” the onlooker asked. Linda rolled her eyes and offered a geography lesson.

Not only was Women’s Weekend promoted, but women from all over the country learned about the resort town of Rehoboth Beach.

Sometime in those early years, artist Geri Dibiase offered up a vibrant photo design for a Women’s Weekend t-shirt to be sold at the event and she’s been donating new designs each year since. In addition, Geri donates the original artwork to be auctioned off to raise money for CAMP Rehoboth.

“I’m so grateful for the opportunity to produce the t-shirts and proud to have my art featured in this nationally recognized event,” Dibiase says.

By 2008 and 2009, as the CAMP Rehoboth office expanded into a Community Center, it provided a welcoming hub for all the women converging downtown each April. And there was a new intimate performance space for musicians plus theatrical events like a production of The Vagina Monologues and a one-woman show about journalist Molly Ivins.

Women’s Weekend now had nine years under its belt, and included events like golf, craft fairs, and more to make it a beloved spring custom.

And Then Came FEST
For the 10th Anniversary in 2010, the weekend became FEST, an acronym for Fun, Entertainment, Spring Tradition.

“My now-spouse Diane and I started dating right before Women’s FEST 2010,” says Rehoboth resident Jennifer Rubenstein, “and it was very odd going to speed dating, where we did the round robin with a bunch of other singles but kept a watchful eye on each other.” It turned out well.

A decade in the making, the 2011 FEST was now the largest women’s event in the mid-Atlantic. A partnership with the Delaware Breast Cancer Coalition (DBCC) added the Broadwalk on the Boardwalk, a walk to help raise funds to fight breast cancer and honor those affected by it.

“A flood of pink-wearing walkers showed up, some with their dogs, also in pink, and some supportive guys in pink boas and drag,” says one participant. “It was fun, and also serious, with a moving ceremony at the end. I loved it.”

Volunteer Kathy Wiz, whose sister had the disease, helped bring CAMP Rehoboth and DBCC together for the event. ”For me, the Broadwalk is a way of showing gratitude for my sister’s survival.”

Since 2011, Broadwalk on the Boardwalk has raised over $75,000 in donations benefiting the Delaware Breast Cancer Coalition.

Of course, over the years dozens and dozens of volunteers populated the official FEST Committee, with steadfast support from the CAMP Rehoboth staff and Board.

“I clearly remember that first event, filling 75 seats at the library, hearing the presenters, and thinking this was new, uncharted territory, and hoping it could be expanded,” says long-time CAMP Rehoboth Board Member Jane Blue. “Boy, that was an understatement!”

In conjunction with national advances in LGBTQ rights, specifically the lifting of the ban on gay and lesbian service members, the 2012 FEST welcomed special guest Col. Grethe Cammermeyer. Instrumental in overturning the military’s Don’t Ask Don’t Tell policy. Cammermeyer hosted a Saturday Q&A after the showing of the film Serving in Silence, based on her life story and starring Glenn Close.

Musician Tret Fure recalls sitting with her hero, Col. Cammermeyer, in the front row at comic Suzanne Westenheofer’s show. “When my friend Suzanne looked down and saw us together in the front row, she almost fell off the stage.”

Help! Quick Thinking Needed
But 2013 brought drama. Out and proud country singer Chely Wright, pregnant with twins, was to be the headliner. Unfortunately, her doctor put her on bed rest a week before the show. She sent her apologies and the committee freaked out!

“We sold 700 tickets and had no entertainer. We were hysterical,” recalls Committee Chair Dottie Cirelli. Frantic committee members hit their phones and by the end of the day, comic Kate Clinton shuffled her schedule and bailed the event out. It was another huge success and Chely Wright’s twins were born happy and healthy.

Making good on her earlier promise, Chely performed to a packed house the next year and the Broadwalk was bigger than ever—honoring not only survivors and sisters lost to breast cancer, but adding women and men touched by all cancers.

Two-time headliner comic Poppy Champlin performed and offered a stand-up comedy workshop. “I’ve loved my times at FEST, the spirit of the women, the huge number of women flocking to town. And doing a show for 800 women is a real thrill for a comedian.”

Results!
The rest, as they say, is herstory.

In 2018, FEST statistics showed 3,832 seats filled at 23 different venues plus a new partnership with Beebe Medical Center for a health fair at the community center—further fulfilling one of the original Women’s Project goals.

For 2019, the numbers were even bigger. And while there was still emphasis on topics especially important for lesbian and transgender women, the FEST had become popular with a diverse group of attendees.

Rehoboth resident Deb Ward said, “My mother-in-law started visiting us on Women’s Weekend and loved it—and as a breast cancer survivor walked in the Broadwalk. Next thing I knew, her sister started coming, then my own sister joined us. It’s a spectacular event for all women, and it’s become a family tradition.”

It was different, 22 years later, far from when women had no idea how to protect themselves legally or find a welcoming doctor. “Our community is being courted now,” Ellen Feinberg said, “and everything is so open and accessible.”

It was a long way, baby, from those turn-of-the-century workshops at the library. That fledgling Women’s Project Committee launched the event, then they and so many other hard-working volunteers took the idea and ran with it—with no plans to stop celebrating anytime soon.

Then Came 2020
The 2020 FEST, a special 20th Anniversary event featuring The Indigo Girls, was canceled due to the COVID pandemic. Bummer!

One bright spot was that all of our wonderful sponsors kept their money in the FEST pot for the future. We love our sponsors! Especially presenting sponsor Olivia Travel and Legacy sponsors Jenn Harpel, Jeanine O’Donnel, and Lana Warfield.

The 2021 FEST happened online, with a few Zoom events and some fun in the midst of the dark days.

But NOW, FEST is LIVE again for 2022. Our wonderful sponsors are back, country singer superstar Chely Wright and the hilarious Funny Girlz will be performing (among others), and we are back on track.

FEST Passes are now on sale, as are individual event tickets—visit camprehoboth.com. to purchase yours.