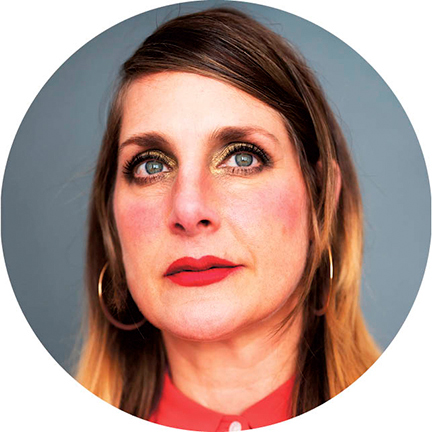 Radical Acceptance in a Radical Space

Drag hasn’t always taken form in mainstream reality competition series and bachelorette parties at drag bars. In the late 90s, the scene in San Francisco was subversive, radical, and rambunctious, exploring many styles and challenging the gender construct. Monique Jenkinson, whose new memoir, Faux Queen: A Life in Drag, brings readers into that world through her perspective as the first cis woman to win a major drag pageant at the San Fran bar called the Stud.

Suitably, Jenkinson’s drag name is Monique Fauxnique. Discovering the art of drag in the San Fran of the late 90s, Monique expressed her passion for the arts through dance. She was drawn to the world of drag through community and friendships, with one of her dance tour mates bringing her to the Stud in 1998.

“I want to recognize the sake of coming together in difference, and joyously so, as we share space,” Jenkinson said of her unique perspective in approaching this memoir. Monique is quick to share that her attraction and participation in this scene and what she calls her role as at least “culturally queer” does not make her an interloper by any means. Her cis-het outsider perspective on drag comes from a place of celebration, not mockery.

In fact, her outside perspective is one of the purposes of the book. “This book is about difference. It’s about being different, feeling different, and finding commonality. Radical acceptance in a radical space,” writes Jenkinson in the book’s introduction.

Indeed, Faux Queen explores drag, queerness, history, dance, feminism, friendships between gay men and women, and how we create ourselves in both radical ways and spaces. It offers special attention to those radical spaces, namely the weekly Tuesday night show and annual pageant called “Trannyshack” at the Stud.

Yikes, it’s that word. “The name of the show—we can call it the Shack for short. The first few pages I realized I had to give a trigger warning and ‘buyer beware,’ because this was a word we used to use joyously and lightly until, as Auntie Kate Bornstein and Auntie Vivian Bond said, bad people got ahold of it,” Jenkinson said. Confronting it directly, the t-word and the evolving nature and usage of language became a fascinating rumination for the story instead of a shame or detriment.

As a show, the Shack combines much of the book’s sentiments and challenges readers to consider how fractious or hyper-sensitive even the queer community may have become in the time since. The show was daring, messy, and liberating. Fauxnique debuted in drag there, albeit under a different drag name, to the number “I Dream of Wires” by Gary Numan.

A few years later, Fauxnique went on to win the Miss Trannyshack pageant’s top honors—a distinction that became the reason for this book and the “motivating event behind anyone’s interest in [Monique’s] life”. The Shack is a reconciliation of the seemingly oxymoronic “unsafe safe space” that is integral to the celebration of Faux Queen. “The unsafest of safe spaces helped us to enact an impossible project: to get free,” reflects Jenkinson in the first chapter.

With a strong, compelling command as a memoirist, Jenkinson masterfully interjects these theoretical ideas among carnal, sensory details. “I’m trying to balance these ways of taking us into the spaces and onto the sweaty dance floor—where no one’s talking about theory, they’re living it—and then bring in the analysis of that moment, of those acts, and of that space,” said Jenkinson.

Moments of humor invite outsiders in, as does Monique’s explanation of key drag lingo like “kiki” and “serving shrimp.” But for the most part, the audience for this book is Monqiue’s community of drag sisters and queer friends. “I know it’s for my people; the book is for my friends,” said Jenkinson, before noting, “It’s not for everyone but hopefully it’s for anyone.”

With Faux Queen out now, Monique understands the audience will take away what it will from the book. Yet, she still hopes the memoir offers readers an opportunity to see the world in its kaleidoscopic wonderlands. “Later on in the book, there’s a chapter called Gender Fold, that’s about resisting this idea that there’s a neutral or that everything should be easily categorized. It can be a safe space, and an unsafe space. So, it’s taking this willingness toward multiplicity. Humor in that context is important.” ▼

Faux Queen is available wherever books are sold, including amazon.com and bywaterbooks.com or through Browseabout Books in Rehoboth. 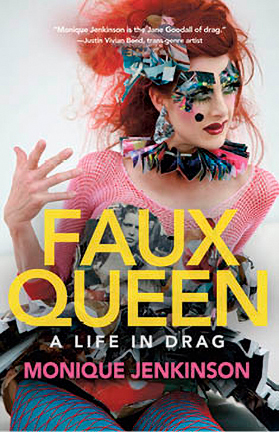 Matty Brown is the Operations Administrator at CAMP Rehoboth and Editorial Associate of Letters.