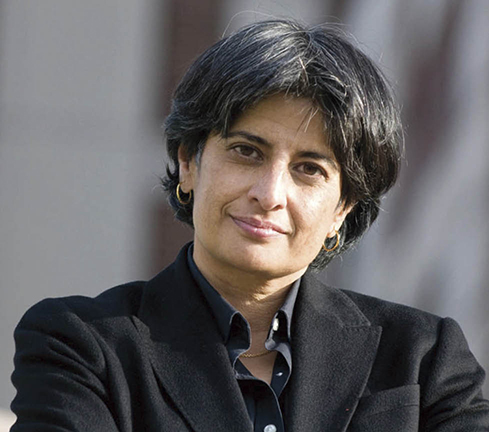 Longtime activist Urvashi Vaid, a leader of many LGBTQ+ and other social justice organizations, died May 14, 2022, at her home in New York City. Most recently, she was the president of the Vaid Group, a social innovation firm that works with global and domestic organizations to advance equity, justice, and inclusion.

Vaid, a graduate of Northeastern University School of Law and Vassar College, began her career as a staff attorney at the National Prison Project of the American Civil Liberties Union, where she initiated the group’s work on HIV and AIDS in prisons. She spent 10 years at the National LGBTQ Task Force in various positions, including serving as executive director of the group, then known as the National Gay and Lesbian Task Force, from 1989 to 1992. Her time at the Task Force “saw her bring all aspects of queer life and struggle into the public eye,” the group’s press release notes. She co-founded its Creating Change conference, now in its 33rd year.

An award-winning author and researcher, one of Vaid’s books, Virtual Equality: The Mainstreaming of Lesbian and Gay Liberation (1996) won the Stonewall Book Award.
Vaid was the aunt of activist and performance artist Alok Vaid-Menon, who survives her, along with her longtime partner, political humorist Kate Clinton. ▼

Henry Eschel “Hank” Edgerton Jr., 80, of Rehoboth Beach, passed away Thursday, April 21, 2022. He was born December 6, 1941, to the late Henry Eschel Edgerton and Dorothy Mae (née Coleburn) Rae. Hank grew up and lived mostly in Baltimore City, graduating from Forest Park High School in 1961, where for a short time Cass Elliot of the Mamas and the Papas fame was a classmate. He later received two associate of arts degrees from the Community College of Baltimore.

Hank worked at St. Agnes hospital in the accounting and medical records departments, retiring after 35 years of service. After retiring, he moved to Rehoboth Beach. Hank enjoyed singing throughout his life, performing with the Baltimore Men’s Chorus and local barbershop quartet, and was looking forward to auditioning for the CAMP Rehoboth Chorus. Hank loved to travel, read, and follow the Ravens and Orioles.

Hank, who was predeceased by his loving partner, Theodore “Ted” R. Zapalowicz, was laid to rest April 26 in Holy Cross Cemetery, Baltimore, Maryland. ▼

Jeanne Ann Farnan, 82, of Rehoboth Beach, formerly of Annapolis, Maryland, passed away Monday, April 18, 2022, after a sudden illness. Her beloved partner of 44 years, Linda Karen Jennings, was by her side.

Jeanne was born in 1940, in Buffalo, New York, to the late Edward George Senecal and Rita Veronica (Malark) Senecal. Jeanne attended Rosary Hill College, where she obtained her bachelor of arts in history. She also obtained a postgraduate degree in political science and law from Canisius College.

Jeanne held key executive leadership positions across her career and was most notable in her role of international investment banking and trade finance, specializing in infrastructure project finance.

Jeanne was a member of American Women in the Arts, the Smithsonian Association, Washington Trade Association, Annapolis Yacht Club, and was Phi Beta Kappa.  She was of the Catholic faith. Jeanne loved sailing on the Chesapeake Bay, home gardening, and riding horses. Most of all, she loved spending time with her dear, close friends in Rehoboth Beach and Annapolis.

A funeral mass will be offered at 11:00 a.m. on Saturday, June 11, at St. Edmond Roman Catholic Church, 401 King Charles Avenue, Rehoboth Beach. Interment will be private. Memorial contributions in Jeanne’s memory may be made to Holy Family Catholic Church, 826 Central Avenue, Davidsonville, Maryland 21035. ▼

Dr. Georg Thomas “Tom” Urban passed away Wednesday, April 20, 2022, at the age of 74. Tom was born March 29, 1948, in East Cleveland, Ohio, to George and Helen Williams Urban. He attended Ohio Wesleyan University, where he graduated with a bachelor of arts degree in philosophy in 1970.

Tom relocated to Houston, Texas in the early 1990s, where he taught at multiple colleges and universities, before committing full-time to Houston Community College. At HCC, he expanded the philosophy course selection and access for all students and was eventually elected president of the Faculty Senate. He retired from HCC in 2012.

While in Houston, Tom was president of the non-profit charity, The Grey Party, which was organized in the 1980s to raise funds for local HIV-AIDS charities. From 1999-2005, he was a member of the Ryan White Planning Council, an organization whose goal is to improve the quality of life and advocate for those living with and/or affected by HIV.

Tom met his husband, Marc Samuels, in 2003. The two moved to Delaware in 2012 after Tom’s retirement, to be near one of his favorite vacation destinations: Rehoboth Beach. In retirement, Tom was an active member of the Caesar Rodney Chapter of the Sons of the American Revolution and spent a great deal of time researching and organizing family history, locating graves and documents for his family going back over 400 years. He could often be seen walking his neighborhood (targeting 10K distance per day), or with Marc at Cape Henlopen State Park.

The family will hold a gathering in Tom’s honor later this summer. Donations can be made to Citizens for Animal Protection, cap4pets.org.  ▼