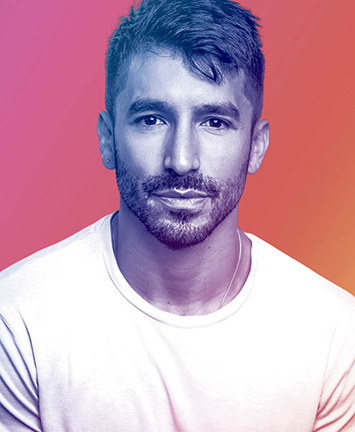 Evolution in life is crucial but evolving on social media is practically a necessity. For Ian Paget, amassing well over two million TikTok followers has required evolution, honesty, and some absolutely killer dance moves. While his entertainment career has not been without its heartbreaking pitfalls, hitting the red carpet for this year’s Academy Awards is one of the sweetest rewards yet.

I sat down with Ian for an extensive chat where we discussed his love for 30 Rock and RuPaul’s Drag Race, and he got brutally honest about mental health challenges for the LGBTQ community and we manifested a little on his amazing future plans.

Michael Cook: You’ve gone from the becoming one of the biggest names on TikTok to the red carpet of the Academy Awards! What was it like to attend the hottest night in Hollywood?

Ian Paget: WOW—kinda crazy and so amazing for me. Vanessa Hudgens did a lot of the interviewing for ABC and we were all in the background. We were right at the spot where after press and before the theater, the stars turned the corner. To feel that kid-like energy from nominees was amazing; you really feel it.

MC: I think that is a very accurate description of yourself, from you. From an outsider perspective, you do have a very disarming quality of sorts, which definitely translates to your viewers, I am sure.

IP: I love that. It’s funny—my friends have asked, “If you had a superpower what would it be?” And mine is that I make people very comfortable around me. I think I go straight to “okay tell me about you.” My way is saying something like, “I see there is this thing that you do, do you know that you do that?” It is a way that I am connecting with you to say, “I see you.”

MC: Social media for so many people is a launching pad to bigger and better things. What comes next for you?

IP: I’m a guest on my friends Zak and Sloan’s podcast called Mummy Dearest. That show started off as a fan reviewing of the film The Mummy with Brendan Fraser and Rachel Weisz. They realized that they couldn’t just talk about one film for 17,000 episodes, so now they talk about other movies as well. We had such a great rapport that we created a new podcast titled It’s Giving Share and we are pretty proud of it. Hopefully, the show will be a place where people can come and hear a longer form version of things that I am going through and things I want to help people feel better about.

MC: The shame in the LGBTQ community regarding mental health continues, with many people turning to substance abuse or alcohol v. getting assistance for their issues. What do you think it is about mental health that still has such a stigma, even in this day and age?

IP: I think it is because we are scared to tackle it in ourselves. What we hate that we do, we avoid in ourselves. Therefore, when we see it on other people we either don’t want to hear about it and/or deny that it’s true. You don’t want to be faced with the mirror in front of yourself, because then you would have to deal with it. Instead, we pooh-pooh it and shame other people about it.

I feel like in 2022, there is a huge shift in terms of mental health being really important. There is such support for people going through things, with people coming in droves behind you saying, “thank you for sharing, I can totally relate to that.” I think a lot of people are...scared to share. I am an ever-evolving human with many things that I think are a mess that I don’t want the world to know about and that I avoid. I think my way of handling that is that I go to therapy and talk about it with my friends.

MC: What is something that you want to manifest for yourself right now?

IP: First, I love this question. It scares me because you have to think of something that you really want. I think of that Marianne Williamson quote that says, “our deepest fear is not that we are inadequate. Our deepest fear is that we are powerful beyond measure. It is our light, not our darkness that most frightens us.” Six months from now, I would love to be on a sitcom. And maybe my podcast has blown up—that would be so cool! ▼