The Marvel Cinematic Universe has another superhero tie-in narrative coming to the Disney+ streaming network, and it’s called Ironheart. It’s based on a Marvel Comics character who debuted in 2016, a teenage genius inventor named Riri who creates an advanced power suit that leaves Iron Man’s in the dust. Tony Stark learns of it and seeks her out to collaborate and set her on the path to superhero status. Dominique Thorne (Judas and the Black Messiah) is set to star as Riri, but little else has been known about the project and details have been kept under wraps until now.

Marvel announced that the series will also include a transgender character, unnamed so far, and that the show is looking to cast, according to the POC Culture site, a “Black, Latina, or Afro-Latina transgender woman who is around 18-22 years old…” and that the “character will be smart, confident, and with a mystical bent and unique sense of humor.” We’re thrilled by this development, because now that the MCU has fully infiltrated all of our waking and sleeping lives, and lagged behind those real lives in terms of queer representation, we’re happy to see steps in the right direction for queer actors. And if you fit the bill, call your agent and get that audition.▼

He just went publicly gay in the new HBO standup special Rothaniel, and now Jerrod Carmichael will be seen in the latest film from Yorgos Lanthimos. The filmmaker, best known for The Favourite, and The Lobster, is the most well-known director from what is sometimes called the “Greek Weird Wave,” and the new film Poor Things, adapted from Alasdair Gray’s 1992 novel of the same name, looks like it will hew to that same unsettling vibe.

It’s the story of a drowned Victorian-era woman named Belle (Emma Stone), whose scientist father (Willem Dafoe) decides to revive her with a brain transplant. Carmichael will play Harry Astley, one of Belle’s suitors, alongside a supporting cast that includes Mark Ruffalo, Margaret Qualley, Christopher Abbott, Kathryn Hunter and Ramy Youssef. While we’re waiting for Carmichael’s own directorial debut, On the Count of Three, to find its way from its Sundance 2021 origins into theaters, we’ll be digging into this Frankenstein-ian tale sometime later in 2022. ▼ 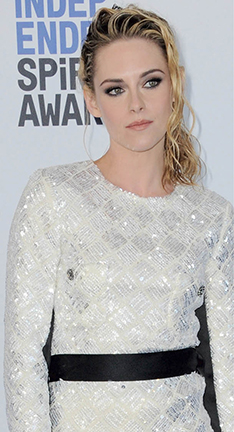 You won’t have to wait much longer to see more Kristen Stewart on the big screen. She’s already wrapped the latest David Cronenberg project, Crimes of the Future. The 79-year-old Canadian auteur hasn’t directed a movie since 2014’s Map to the Stars and hasn’t directed one like his legendarily disturbing sci-fi films—see Scanners, The Brood, or the wildly divisive Crash—in even longer.

Crimes of the Future, shot in Greece in 2021 and wrapped and primed for film festival bows this year for a possible year-end theatrical release, should restore that balance. Set in a future where human beings can quickly evolve new organs, it’s the story of an artist who turns organ removal into theater. In addition to Stewart, Viggo Mortensen stars as Saul Tenser, the artist, alongside Scott Speedman and French actress Lea Seydoux (No Time to Die). Cronenberg has already gone on record as calling the film potentially shocking, so brace yourself, arthouse fans.▼

It’s spring, which means people are feeling the evolutionary drive to get a little romance going. And Hulu is about to drop the teen rom-com Crush, starring queer actresses Rowan Blanchard (Girl Meets World) and Auli’I Cravalho (Moana), in case you’re too lazy to get off the couch and find a little love yourself.

Blanchard plays high school art student Paige, who has a crush on track star Gabriella (Isabella Ferreira). Paige joins the track team to woo her intended love interest, but winds up falling for Gabriella’s sister AJ (Cravalho) along the way. From a queer creative team including director Sammi Cohen and writers Casey Rackham and Kirsten King, the story hits the teen rom-com story notes you expect while being unapologetically about girls finding their way to lesbian love, and there still aren’t enough of those to go around. Added bonus: Megan Mullally giving much-needed Megan Mullally energy. No more translating those vintage John Hughes movies into fan-fictiony queer narratives; the real deal started streaming on April 29. ▼