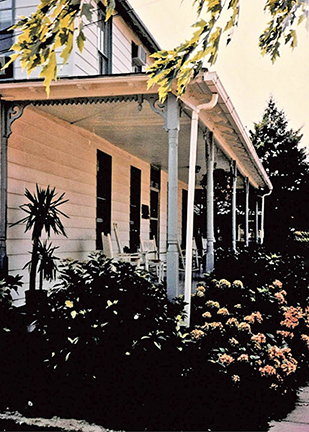 A Walk Through Paradise

In 1979, Herbert Koeber opened Rehoboth Beach’s very first openly gay-owned and operated gay business for gay men. The Paradise Guest House (PGH) wasn’t anything particularly special from the outside. It was apparently so unremarkable most would walk or drive right past it and never even notice it was there. In fact, just a couple decades later and almost the whole town has forgotten it even existed. However, what happened inside the property located on 40 Maryland Avenue was anything but ordinary.

To truly understand the gay paradise our friend Herbert created, we need to get inside and do a walk-through….

As you walked up the front step to the porch, you would walk past Herbert’s favorite blue hydrangeas. (The accompanying photo is the only one found of the blue lacecap hydrangeas, two of which still remain on the property today.) The porch was where many first met Herbert, tending his garden or having a smoke as he sat in a large wooden rocker. He would greet visitors in his thick German accent, followed by a warm smile and firm handshake.

Once inside, you entered a large room with walls made of thousands of tiny glass mirror shards pressed into white plaster, seeming to replicate a disco-ball. The room was surrounded by five rooms with doors made of curtains and was filled with lounging furniture. There were dirty magazines easily available and a small TV with a VCR. Next to it, a wide selection of 70s-style gay porn. This was where men would often meet, have drinks, and socialize. At this time (pre-HIV/AIDs pandemic), for many men this was a once-in-a-lifetime type of experience, and I ask readers to understand: there wasn’t much time for courting.

The first-floor hall had more rooms down both sides; these rooms had doors. There was a small bathroom at the end of the hall, and a social room with a single payphone. Men would socialize, smoke, or have a drink while they waited for their turn to use the only phone available in the house. With sometimes more than 100 men in the house and only one phone to share—these days, this scenario is unimaginable!

The first floor also held a room with a big secret. Opening a trapdoor in the floor would reveal a ladder that led down into a hidden room. The hidden room had candles, smelled of incense and weed, had black velvet art on the walls, and thick orange shag carpeting. In the middle of the room, hanging from the ceiling, was a sex swing made of flowy fabric and styled to match the room and times. Next to the swing was a huge chest that held a variety of naughty toys.

The backyard was small, but had a porch, an outdoor shower, and a small patch of grass where often a couple tents would be pitched. Rickety stairs led up to a very large second floor open deck area. It had a small workout area, but also had a stage area for performances, games, and shows.

The second floor was entirely clothing optional and offered a dozen tiny rooms, only a few of which had doors. The rooms with windows facing the deck were highly desirable. They provided great viewing of the fun happening on either side of the glass. If you liked who was watching, or spotted someone cruising you liked, the windows provided an easy access point for a welcome visitor.

The third floor was really just the attic, very large in floor space, but too low to stand in most places. Herbert put a divider down the middle, an air conditioner in a small window, and mattresses everywhere. In one corner was a strange small room only big enough for the twin mattress on the floor. In short, the third floor could best be described as a big pile of debauchery.

Visitors to the PGH were not sex-crazed addicts with a mental problem. And the PGH certainly was not a brothel or sex club. This was a place of freedom and sanctuary, designed to allow these men to have a moment to truly be themselves, to meet other people like them, to make friends, and to feel even just for one tiny moment...normal and at peace. And in 1979, Herbert wasn’t aware of HIV/AIDs and the impact it was about to have on the gay community.

Upcoming: some really incredible stories I learned about Herbert; readers will really start to understand why the Paradise Guest House was so special and should be considered an important part of Rehoboth’s history. Also still coming up in our story: the horror of the HIV/AIDs pandemic and its direct devastation in Rehoboth. ▼