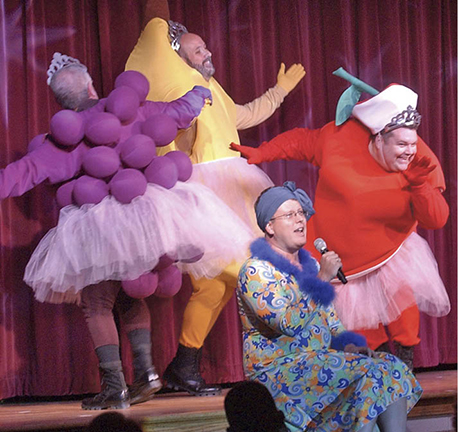 CAMPing It Up at the Follies

If you arrived in the area after the Summer of 2008, you may have heard some folks talk wistfully about the CAMP Rehoboth Follies. Once upon a time, specifically on one long, fun, often alcohol-saturated night each July, from 2002 through 2008, CAMP Rehoboth presented its big, brassy Follies show as a fundraiser.

True to our LGBTQ community’s love of campiness, musical theatre, drag, and competition, it was an amateur variety show of skits and songs. And every year it rocked the Convention Center with standing-room-only crowds as diverse as our community. Nobody wanted to miss the Follies.

It was a great big, unpredictable, sometimes naughty, fabulous let’s-put-on-a-show extravaganza, with jittery performers trying their best as cheering audiences provided the ovations. I don’t know what was more fun, the groups who got it fabulously right or the ones who tried so hard you wanted to hug them. There were always great performers, dropped cues, dropped wigs, and a heck of a lot going on.

The original idea for the Follies came from the 1980s and 90s. Those were the years, before rental fees skyrocketed, when groups of men (and some women) rented shared houses in Rehoboth. These houses, filled with weekending gays and lesbians, took great pride in their families of choice. They held backyard parties featuring drag shows, skits, and fun. When folks wanted to raise money for AIDS charities, the group houses held massive backyard parties, with the families competing against each other with outrageous skits and music.

In 2002, CAMP Rehoboth brought the idea back, producing a Follies at the convention center to raise money for the new community center. CAMP co-founder and president Murray Archibald was production manager. The teams, from the remaining group houses, or a crew of friends signing up to enter, were named for their addresses, like 212 Laurel or 7 Hickman or merely The Delmarva Divas, Bayard Street Boys or Gangs of Rehoboth—and the first all-woman team, the Power Surges.

And the spirit of the house parties came out of the backyards and into the convention center—with the old traditions living on, and the Follies as a way to honor those long-ago skit participants, many of whom were no longer with us. The Follies grew to include almost 200 performers and technical staff in the annual effort.

The groups generally had just a few rehearsals and the stories are legendary. Rehearsing in condo living rooms, one chorus stepped left and all you heard were noses hitting the sliding glass doors. In another living room rehearsal, as team Charlies Angels all raised their love flags the ceiling fan chopped the tops off.

The lesbian team rehearsed “Nothing Like a Dame,” and one year, three of the teams all rehearsed the same gay Broadway anthem, “I Am What I Am” for the show. That’s show biz indeed.

The judges were local celebrity entertainers, legendary bartenders, and even city commissioners. They judged on content, creativity, and execution. There were, to borrow a phrase from Ethel Merman, the costumes, the scenery, the make-up, the props…and a lot of wigs.

For first, second, and third place winners, the teams were awarded Barbie Doll Trophies, spray painted bronze, silver, and gold. The Emmy and Oscar would have been jealous.
As the years went on, the show added a celebrity emcee—the remarkable female impersonator Christopher Peterson—and the production values got more extensive. Think: mega professional sound and lights, and all manner of added details.

Early in the game the production staff—producers, techies, stage managers, and directors (I was one), started to refer to the Follies as ‘the F word’ for its complexity, long rehearsals, and small headaches. But we always said the F word actually stood for “fabulous fun with friends who are family.” And we meant it.

From the skit “Oklahomo” and the Delmarva Divas singing for equal rights, to the men in women’s bathing suits with skirts and flowered bathing caps, there was no limit on creativity. Performing “Some Day We’ll Be Together” as a plea for marriage equality was moving and timely. Of course, it might actually have made Diana Ross cry. And not in a good way. But it was wonderful.

And all the weekday accountants, lawyers, engineers, and retailers loved being on stage. There were more hams than in Smithfield. It was a blast.

As for the 2009 demise of Follies—who knows what happened…. Maybe it was just easier and more lucrative to hire a big celebrity to entertain for a fundraiser, or maybe the production team was worn out, or moved on or…well, I have no idea.

But it’s left a big void in campiness around here. Hey, anybody interested in a Follies revival? It’s possible, you know…. ▼