Betsy was a graduate of Carnegie Mellon University in Pittsburgh, where she earned a music degree. She taught instrumental music in the Pittsburgh public school system for 33 years.
Betsy loved the theater and spent summers working in summer stock productions as a lighting director and contributed her talents and experience to the community theater group Possum Point Players. She was a member of the Lewes Yacht Club and participated locally, nationally, and internationally in Sunfish regattas. 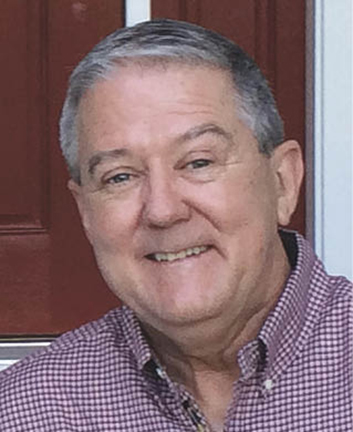 Horace Herman Holden, 62, passed away on February, 26, 2022. A native of Oconee County, South Carolina, Mr. Holden was the son of the late Joe H. and Lana Sue Hood Holden. He was an information technology specialist and worked for the IRS. He was a member of College Street Baptist Church.

Horace, known to many friends as Harris, lived many years in Washington, DC. He began visiting Rehoboth in 1990 and fell in love with the community. He contributed to the Rehoboth community by sponsoring Sundance every year, volunteering with fundraisers, and becoming a CAMP Rehoboth Founders’ Circle designee and a lifelong member of CAMP Rehoboth.

Harris enjoyed all that Rehoboth life offered, in both summer and winter, and moved to Rehoboth full time in 2020. Time with friends and family were always his most valued memories. His loving smile and warm embrace will be missed by all who knew him. ▼

Dr. Chap entered the US Army in 1966 while working as a physician at Walter Reed. He served in Vietnam, earning several medals, including the Combat Medics Badge and Commendation Medal.

Following his honorable discharge in 1968, Dr. Chap began private practice in Washington, DC and continued for 15 years. He then spent 15 years as a physician at the World Bank, retiring in 1998. After retirement, he moved from his home in North Chevy Chase, Maryland, to Rehoboth Beach, Delaware.

Dr. Chap is survived by his life married partner of 48 years, Randolph C. Smith, along with a host of cousins and dear friends.

Dennis attended the University of Delaware and earned a master’s degree in education in 1976. Dennis then began a career in education, teaching biology at Caesar Rodney High School in Dover.

From there, he became a champion for educators as a lobbying representative for the Delaware State Education Association, where he found a new passion for computers. After spending time as the default office “computer guy,” Dennis decided to pursue his passion and created his own company, Prism Web Designs.

His love for the beach and the Rehoboth community compelled him and the business to move there a few years later. While in Rehoboth, he was a tireless advocate for the LGBT community and local charities; he owned an LGBT magazine and website. Retiring recently, he was able to focus on his true loves: his dogs, cooking, his summer garden, and the Philadelphia Eagles.

Dennis was a wonderful father, grandfather, and friend. He will be deeply and genuinely missed by all who knew him.

A celebration of life will be held at a later date. Donations in Dennis’s memory may be made to the ASPCA. ▼

Later, after she met Jan, Lois owned and operated a thriving landscape business, Heritage Landscaping, in Kennett Square, Pennsylvania, where they both worked, along with 12 employees. Eventually, a florist shop was added.

Starting in the mid-1990s, Lois and Jan lived in a house they had built in Pinewater Farms. They lived there for 14 years, making many friends. They were one of the first to move to a cottage at the newly finished Cadbury in Lewes which later became The Moorings.

St. George’s Chapel was their spiritual home, and they both were active members of Episcopal Church Women.

Lois and Jan walked lightly on the earth, with love and respect for each other and those around them. They requested contributions to either Brandywine Valley SPCA, Georgetown, or St. George’s Chapel, Harbeson. ▼

Clifton Earl Waters was born in Salisbury, Maryland on November 25, 1970. He lived between the two homes of his mother, Shirley V. Waters, and Howard and Emily Wright.

He was educated in the Wicomico County school system, graduating from Parkside High School in 1988. Clifton furthered his education by attending Salisbury State University, studying psychology.

Clifton’s smile was simply captivating and drew everyone to him. He will be remembered for that smile and his bubbly and direct personality. Clifton was a sounding board to many and loved reading, dancing, and performing. He was also one of the most sought-after cosmetic artists in the area. He was also a “Mother,” and conveyed to everyone the importance of being true to oneself. He will be missed by many, and never forgotten.

Lois Margaret Corson, 86, of Millsboro, passed away March 23, 2022. She was born May 16, 1935, in Staten Island, New York, daughter of the late Frank and Margaret Adelaide (Schaefer) Corson.

Lois obtained both her bachelor’s and master’s degrees from the College of New Jersey. She taught health and physical education in Middletown, New Jersey-area schools for 37 years.
Lois was an avid traveler whose journeys took her to Tanzania, Egypt, China, Ireland, Scotland, Italy, and Russia. She also enjoyed taking cruises.

Lois is survived by her wife of 32 years, Mary Kae; her cousin, Kelli Spadavecchia (Nick) and her family; her many nieces and nephews; and her numerous friends. Lois was a loving and devoted wife, cousin, aunt, and friend. She will be deeply missed by all who knew her.

Chris graduated from Delaware Technical Community College in May of 2017, earning his associate degree in nursing. He worked at Beebe Healthcare in the emergency department, where he made countless friends and left an impression on all he encountered.

Chris was an avid fishing and surfing enthusiast. He earned his captain’s license and was proud to fish with his family and friends aboard the Marie Ann.

Chris was a wonderful and dedicated husband, son, brother, uncle, and friend. Loved by many, he will be deeply and genuinely missed by all who knew him.