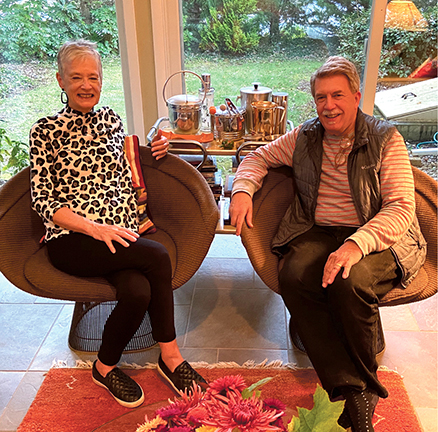 I’m a bit ashamed to admit it took the TV show Mad Men to bring mid-century modern style to my attention.

Rehoboth Beach homeowners Kate and Bunky Markert, on the other hand, were fans of the mid-century aesthetic well before the arrival of Mad Men’s Don Draper.

This couple—she’s the executive director of the Hillwood Estate, Museum, and Gardens in DC and he’s a former member of Rehoboth’s Planning Commission—incorporated their love for the look into their late 1960s-era ranch home in Rehoboth’s Schoolvue neighborhood.

For Kate and Bunky it started more than two decades ago when they lived in Cleveland, Ohio, and met a white-haired nonagenarian gentleman by the name of Viktor Schreckengost. Schreckengost was a distinguished but unsung industrial designer and artist who created and influenced a wide-ranging variety of everyday products. His work extended from toys and bicycles to stoves and lawn furniture to flashlights and dinnerware starting in the 1930s and continuing through the late 1960s. Often called the “American DaVinci,” Schreckengost inspired generations of designers, including the man who designed the original Ford Mustang automobile, the first inexpensive sports car aimed at the American youth market.

At the time, Kate was involved in a major exhibit of Schreckengost’s work for the Cleveland Museum of Art and quickly became enamored with the designer. He became not only a friend, but also a catalyst for the couple’s burgeoning interest in all things mid-century. In 2006, Schreckengost even spent his 100th birthday with Kate and Bunky here in Rehoboth after receiving the National Medal of Arts from President Bush for his contributions to American Art and Design.

Function and affordability was Schreckengost’s motto. Clean lines, simple beauty, and a new way of looking at things drove his work. These are the qualities we think of today when we talk about mid-century design. It’s also the aesthetic that pervades Kate and Bunky’s house. “We’re actually a couple of mid-century moderns ourselves,” Bunky tells me. Kate laughs. But, as I learned in my conversation with them, it’s so true.

The couple purchased their home in 2004 and immediately set about making changes to give it more mid-century style. “It was a bit dull,” Bunky says, “so we replaced the ubiquitous picture window that most ranchers have with a flat grid window and added some retro teardrop style outdoor lighting. In the kitchen, we added period touches like turquoise tile and a stainless-steel island.” As you might expect, the couple set about furnishing the house with mid-century furniture by firms such as Knoll and Herman Miller.

Kate is especially drawn to Schreckengorst’s sculptural tableware decorated with stick figure people and animals. She shows me her favorite pattern, called “Primitive.” The design, she explains, “is very evocative of historic cave paintings. He designed it to appeal to men, which was avant garde in the mid-1950s.” After Schreckengost’s death, his wife gave Kate additional pieces to complete a service for eight.

The couple’s biggest project, however, was to open up the back of the house and add a sunroom. They used blonde wood and slate and installed a brick fireplace and floor-to-ceiling glass windows to give it a more mid-century flair and to better connect the house to the outdoors and all the mature trees on the their lot. The new room doubled their living area, giving them a marvelous space for entertaining and for setting up “The Grove,” Bunky’s collection of vintage aluminum Christmas trees.

Yes, you heard me right. Nothing says mid-century holiday cheer like a shiny silver aluminum Christmas tree. First produced around 1955, aluminum trees became very popular due to their sleek, artsy, space age look and feel. They were easy to put up, affordable, and re-usable. And the needles never dropped. Because adding strings of lights to these trees was a fire hazard, manufacturers devised a rotating color wheel that sat on the floor next to the tree, projecting a single color or multi colors onto the reflective tree branches.

When I ask why these trees fell out of favor, Bunky explains that tastes changed and manufacturers came up with better looking artificial green trees. Some say the Charlie Brown Christmas TV show which premiered in 1965 also caused Americans to reconsider the true meaning of Christmas. Artificial was out and authenticity was in.

Bunky, however, was fascinated with these vintage Christmas trees and as his interest grew over the years, so did the collection, which now numbers 15 and includes trees in a mix of sizes, styles, and colors—silver, gold, green, and even pink. Most are Evergleams, a popular brand manufactured by the Aluminum Specialty Company of Manitowac, Wisconsin.

Kate especially likes the pink tree. Bunky favors a classic silver tree decorated with blue balls lit by a rotating blue color wheel. They’ve found their trees at flea markets and on eBay, and they’ve even received them as gifts from friends.

“At first I liked the kitsch of the trees,” Bunky tells me, “but over time I came to see aluminum Christmas trees as an embodiment of a hopeful era…science and the promise of a great future…America as a shining beacon of modernity and progress.”

Personally, I’d never thought about aluminum Christmas trees or mid-century modern style in this light, as symbols of American ingenuity and optimism, and not just as cool-looking products. Maybe this is part of the reason mid-century modern style (and aluminum trees) endures? Food for thought…. What I do know is that it’s an inspiring and much-needed perspective, especially during these uncertain times. I know I’ll never look at a silver Christmas tree in the same way!