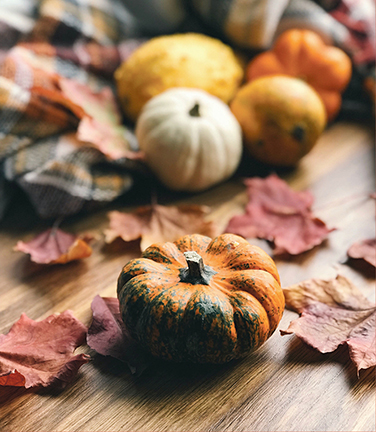 Thanksgiving in the Time of COVID

I don’t know about you, but I’ve begun looking for more ways to shore myself up as the pandemic wears on and the days become short and cold. By now, we all know the drill with physical precautions. We either adopt them or we don’t; employ them—or not—as we are able or inclined to do. But what might we do for our spirits?

There are lots of suggestions out there. But given it’s November and Thanksgiving looms large, the “gratitude” approach seemed an obvious choice. I decided to give it a try; to look hard for things for which I am grateful this holiday season.

I had to get past some disappointment first: for years, I’ve hosted Thanksgiving dinner for my family-of-choice; it’s one of my most-loved traditions. But this year, I cancelled the dinner. More than I want to host the family this year, I want to host it for many years yet to come. So, this year we’ll be very cautious; will not assemble at my table.

I did not take this decision lightly; I sat for some time considering my usual array of guests and ruminating on the possibilities. And suddenly discovered a couple of things-that-spark-gratitude. For one, we’re all still here and well. That was an important baseline to cheer in a year in which all too many people cannot say the same.

For another, there’s the diversity of the family we’ve assembled over the years. We vary in age, gender, race, socio-economic status, and religion. We check most of the LGBTQ boxes; there are Allies among us a well.

This little celebration of my usual dinner party’s diversity led me to reflect on just how I’d arrived at a table populated by such a wonderfully varied group of people. Nothing in my community-of-origin—working class, homogeneous, rural Pennsylvania—offered much variety. I didn’t have a Black classmate until I was in junior high; there were no Hispanics or Asians among us; I had only one Jewish classmate until I hit college.

I looked closer, and realized it was my “micro” surroundings—my own family-of-origin—v. the “macro” of my community that laid the groundwork. That may have happened more by chance than design. My parents sent all of us to college, though my father’s reasons still grate: “So the boys will get educated and the girls will find educated husbands.” Yikes! As it happened, we did indeed find those things—but they were “packaged” differently than my parents might have imagined.

I am next-youngest in a family of five siblings; we arrived over the course of 21 years. My eldest brother went off to college when I was three years old; I was just eight when he brought home his “exotic” fiancé: a Nashville socialite. She perched among us, a peacock amidst barn swallows, exerting her considerable southern charms to make us feel comfortable. Though she had to have felt pretty uncomfortable herself.

There followed a German émigré—just 15 years post-World War II, not all the neighbors greeted him warmly. But my parents did. Then came a New Jersey Jew, and a Black co-worker who first appeared mere months after the release of Guess Who’s Coming to Dinner?. Then, a Filipino nurse. One or another of us married each one, and the family Thanksgiving dinner table expanded to include them all.

What we gained in diversity we sometimes lacked in constancy. In subsequent years, the table had to further expand to include a second (or third or…eighth) spouse (or live-in or partner). Only my younger brother, who married later in life—marriage equality was a long time coming—managed to stop at one. More people—of course—introduced yet more variation: an heiress; a submariner; a Scandinavian; a Pole. On and on.

Our spousal diversity was bested only by the variation among the progeny: children who are Black or Alaska Native or Hispanic; who are protestant or Catholic or Jewish or “none”; who are gay or straight or trans. All were welcome; all still are, in any of our homes.

This year, my Thanksgiving table will be populated chiefly by memories of guests both recent and long-past. As I consider the somewhat motley and unlikely assembly, I will remember the line from Emily Dickinson, “The heart wants what it wants.” Apparently, my heart wants variety. I love who I love. And I am deeply grateful for them all. Happy Thanksgiving.

Marj Shannon is an epidemiologist and wordsmith who has devoted her life to minutiae. She can be reached at marjshannon01@gmail.com.