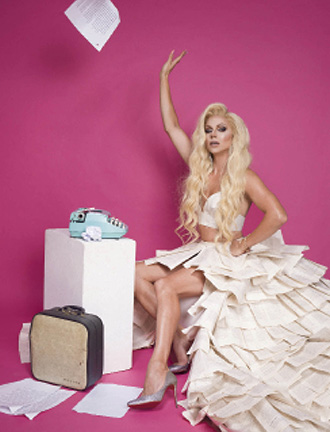 One of the most popular queens to emerge from RuPaul’s Drag Race Season 6, Courtney Act is one of the most discussed and most requested queens to follow up with. Luckily, fans can grab her brand-new memoir, Caught in the Act, to dive into all-things-Courtney. Fans can delve into her past as an Aussie drag superstar, her career as a reality show titan, and her perspective on her Drag Race experience. Courtney and I sat down recently to discuss her earliest days Down Under in drag (prior to social media) and how her Drag Race sisters unexpectedly helped her get through another reality show experience.

Michael Cook: The book dives into your childhood and growing up; what was it like going back and going into those experiences, many of which might have been uncomfortable to revisit?

Courtney Act: After going through the process of writing a memoir, I highly recommend the process of journaling to all and sundry. I have heard people talk about journaling before and never got why it was so cathartic. When you actually go back to memories and write about them in real detail, describing them creatively and descriptively, you get to go back with your adult brain to childhood situations and reevaluate and repackage them in a way that you probably were not capable of doing at the time.

MC: What was it like beginning your drag career in Australia in your earlier days? Doing it in days before social media truly seems revolutionary at this point, and being a young queer person in Sydney at that time must’ve been truly unique compared to now. Are there any queens or moments that stand out?

CA: I am so grateful that social media did not become a thing until I was well out of my wild party days! I had a digital camera, but I was the only one and I still have hard drives full of so many photos from that time—which are such treasured memories. What is so interesting about going through those photos is seeing people’s relationship with photographs. Back then there was nowhere for the photos to go; there was no social media.

There are so many wonderful memories with my drag sisters Vanity and Ashley that were such a highlight; they were so creative and so much fun. Building all of the costumes for our show and choreographing and learning the dances and performances and learning all of the aspects of creating a club night were so much fun and hard work. There was a real family vibe amongst the cast and that was wonderful.

MC: Gender identity and the binary is truly an overarching theme in the book. How do you identify now and what has that journey been like for you?

CA: The purpose of the book is to really go on that journey with me; it is a lot more nuanced than a discreet label. Now I just identify as being content in my gender, sexuality, and identity. The journey has been up and down because when you get to a place where you feel that contentment, it is indestructible.

MC: RuPaul’s Drag Race was such a pivotal moment for your career. How do you look back on the experience at this point in your career? Is there a world where you could return for an All-Stars season?

CA: Drag Race was a wonderful experience. Getting to spend that time with Adore (Delano), Bianca (Del Rio), and Darienne (Lake), our final four, was so magical. The whole cast, so many names, Milk, Gia (Gunn), Ben DeLaCreme, Laganja (Estranja), so many people on that season are standouts in the franchise up to today. It was so wonderful being a part of it. No—there is not a world where I would return for an All Stars season.

MC: You’ve made forays into other reality shows, winning Celebrity Big Brother and coming in second on Dancing with the Stars, and you have moved on to judging a show like Queens for the Night. What are some of the most pivotal reality show moments that have occurred for you during your career? Have you had any “a-ha moments” while spinning on the dance floor or living isolated for weeks at a time?

CA: Wining Celebrity Big Brother was a hugely pivotal moment and I think the reasons that I won it were what made it so pivotal. My conversations in the house around sexuality, gender, feminism, politics, and identity were things that went viral in the UK and around the world. When I came out of the house, people were really interested in my opinions and what I had to say whereas before, I had been a two-dimensional character from Drag Race with a catch phrase and a set of wings. It was nice to be able to come onto Celebrity Big Brother and see a more rounded, fuller image of me.

MC: Is it surreal to see that you have become an inspiration to millions of people all over the world simply by living your life out loud and embracing your individuality?

CA: I guess it is. But when I reflect back on the people that inspired me when I was younger, it was always the people who I saw were living authentically—like The Spice Girls. I know that they were a produced pop band, but there was something about their expression that did not fit with the status quo at the time. Five women who were acting how they wanted to act in a world that said that they shouldn’t, and I always found that empowering. I’ve tried to carry that forward in my life and I am glad that people have been inspired by that.

MC: What do you hope the legacy of Courtney Act (and Shane Jenek) will be?

CA: I definitely would like to leave the world a better place by having been in it, in some small way. I don’t think it am done yet with the things that I want to do. I am really interested in docu-series and other shows that share people’s stories and help foster empathy. I have a show on ABC in Australia called One Plus One; it’s a long-form interview show, 28 minutes, fairly unedited and uninterrupted, and I am getting to share diﬀerent stories on there to a wider audience. A lot of the ABC audience is very mainstream—parents and grandparents. So I have this new fanbase saying that they love watching me on the ABC and that they love my interviews! I try to choose people who have interesting slants on their identities that might not be normally showcased on television. People from queer backgrounds, ethnic and minority backgrounds; I try to humanize them and share their stories to a broader audience, so I would like to do more of that.

MC: What would today’s Courtney Act—with everything you’ve accomplished—tell the Courtney Act that first walked into that RuPaul’s Drag Race workroom, bright-eyed and ready to take on the world?

CA: If only I knew then what I know now! I would tell that Courtney Act the exact advice that my friend Triana, who is a reality show producer, told me before I went in. It was that, “It’s a reality TV show; it’s not a documentary. You are making entertainment.” I remember Triana asking me, “What’s your storyline, what is your character?“ I just didn’t understand at the time. I might have been a little bit more constructed, still authentic, but maybe thought about my character a little bit more. But who knows; I think you have to go into it and hope for the best. Ultimately my story didn’t end there. I have gone on and had a wonderful career and I am very grateful for all of it. ▼