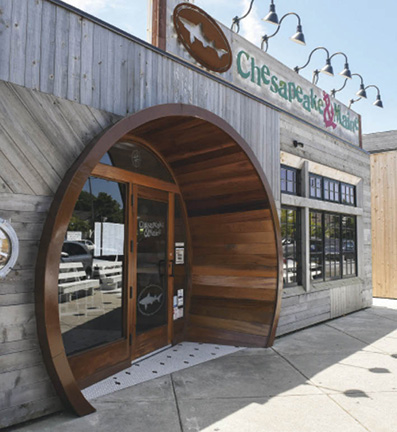 Searching for some seafood specialties? Some slick service? Some subtle sounds?

I’ll stop now. What I won’t stop is enumerating the good things I have to say about this restaurant on Rehoboth’s main drag. It’s a winner.

Chesapeake & Maine opened in 2016, right next door to Dogfish’s original brewpub, Dogfish Head Brewings & Eats. The sister operations work in tandem, each with specialties worth exploring.

Let’s begin with the service at Chesapeake & Maine. Our server, Siera, was remarkably good, guiding us through the salivation-causing menu and making what turned out to be excellent recommendations. Sally was more adventurous than I was; I ordered exactly what Siera told me to order! It turned out I had no regrets (we’ll get to that later).

Then we found out the most interesting thing about Siera: she not only was an outstanding server, but cooks in the kitchen as well. In fact, she was responsible for the luscious lobster bisque I devoured. A real full-service server!

One of Chesapeake & Maine’s specialties is its oysters. A custom-built raw bar serves a selection of oysters and clams from the waters of Maine and the Chesapeake. The evening we went to the restaurant, six of the nine choices came from Maine, two from Maryland, and one from Delaware. They are served with lemon, house cocktail, and Seaquench Ale Mignonette. You can also get fresh grated horseradish, and hot sauce too.

While waiting for our starters, we had an opportunity to peruse our surroundings. As appropriate for a seafood restaurant, the décor was seafaring in theme. There were portholes in the walls, oyster shell chandeliers, plenty of shiplap, and sea-based sayings from writers such as Ralph Waldo Emerson and Herman Melville. Overall, the vision was rustic, coastal New England. Pub-like in nature, but with a full menu. And the music! In too many Rehoboth restaurants, the music is so loud that it makes it nearly impossible to talk with your dinner partner. Here, there was a single guitarist playing pleasant background music that satisfied the senses but didn’t overwhelm the room. A nice touch.

Soon (pleasantly soon), our starters came. Sally ordered the mussels, served in an ample terrine with tomatoes in a tasty broth with a touch of lime, bacon, bell peppers, and cilantro. Sally described them as delicious and some of the largest mussels she’s ever seen. These plump beauties were Bangs Island Rope-Grown in Maine. Quite a catch! Sally actually threatened to drink the broth right out of the pot!

I was lucky enough to order Siera’s lobster bisque. Rich and creamy, it came with large chunks of lobster accented with just the right mixture of herbs and Cabernet cream. Served in a large bowl with tender lobster, the bisque was a highlight of the evening.

Despite being stuffed to the gills (a bit of seafood humor), we each ordered a full entree. Sally ordered the lobster, a 1¼ -pound beauty. She ordered it closed (she likes the challenge!), and it came with all the accoutrements without her having to ask. She loved it. (And did not share, I might add.)

I splurged and ordered the Chesapeake Bay Crab Cakes. The plate had two nice-sized Jumbo Lump Blue Crab Cakes, filling and quite good. An unusual occurrence: neither cake had a single shell. Those locals who like crab cakes will attest that that is a rare pleasure. These cakes were worth the experience.

Side note: There are good fries and not-so-good fries. The ones accompanying my meal were some of the best I’ve tried in the area. The hushpuppies I ordered were plenty in number and golf ball-sized; these were also very good. Finally, the slaw was more savory than sweet, and a perfect complement to the crab cakes.

Unbelievably, we still had to face the dessert menu! Chesapeake & Maine featured their version of the Smith Island Cake, pumpkin cake layered between delicious cream cheese icing. It was nicely spiced, as was the whipped cream complementing the cake. A nice, delicious treat.

Then there was the chocolate thing. It came with three layers: chocolate, white chocolate, and dark chocolate. These layers were fudge-like in consistency and absolutely wonderful. I know the thing has a name. I was too busy swooning to ask what to call it.

The experience at Chesapeake & Maine is what you’d expect from a restaurant with so many positives. There are some seafood specialties, slick service, and subtle sounds. (I know, I said I’d knock it off.) It’s all true. You enter into a restaurant designed like a ship, and walk away with a piece of the sea. My daughter, a true mix of the two of us, will love both the bisque and the lobster. You will, too! ▼