Mister, Are You a Lady?
Writing My Way to Rebirth

I always thought I was a writer. When I was 12 years old, I pretended to be a journalist. Then I became afraid that my father would see my writings and kill me. So, I put that thought way back in my mind. Just like many other thoughts I had to hide—along with my sexuality and identity—from the small, rural, unaccepting, “Good Old Boy” community that was Poplar Branch, North Carolina.

Later that year, I was managing a produce truck at a market in Norfolk, Virginia, when I was robbed and beaten by two Marines. They took all the money I made that day working in the Virginia heat at the city market, and the watch my grandmother gave me—but most importantly, they took the safety I felt in the world outside of Poplar Branch.

When I told the police about the sexually violent acts they committed against me, the police officer said “Boy, we ain’t talkin’ about that. Don’t you mention anything about that now, you hear me?!”

One of many stories I couldn’t tell. But that’s the beauty of writing and living in this great time for me: I finally can share all my stories; people can know them. And share theirs with me. 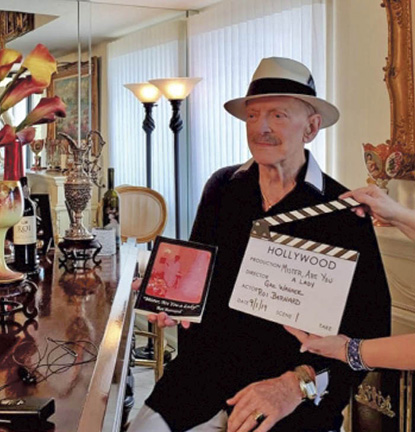 In the years that followed, I graduated from high school; I was a popular boy who tried so hard to fit in. Though I had girlfriends for appearances, I also had many male partners and experiences—all the while being scared to death of being found out.

After graduation I married a high school friend who was pregnant and wanting a father for her baby, as well as the safety and security of a marriage. The man who married us (who I later would discover was gay) gave me that look of, “Boy, do you know what you’re doing?!”

We moved to DC so I could live the American Dream while I worked at the FBI. But despite running, I couldn’t run from myself. That world crashed down around me—but I found my way to a better one.

After I separated from my wife and her dear son we were raising, I found myself on a wild ride of modeling, being a hair stylist, a salon owner, and a local celebrity! That dream life of living honestly came crashing down during the AIDS crisis of the 1980s.

Then I was reborn in the 1990s, upon meeting my partner of 25 years, Mr. Joe. Sadly, three years ago he committed suicide after battling Alzheimer’s.

I didn’t know what to do. But a very good friend bought me three Moleskin notebooks and said, “Roi, write!”

And so, I started. After a while, when I put the pen in my hand, I wasn’t just writing—I was having a spiritual experience. The held-back, pent-up emotions, fears, and memories flowed. By the time I finished writing my book, I was free. Reborn.

We are all human and we all have stories; we communicate through stories. And we all are able to relate to one another and accept each other through our stories.

I wrote Mister, Are You a Lady? because I had no room left inside of me. Too much baggage from my long journey of life.

I dedicated my book to all of the young, confused, LGBTQ+ boys and girls now finding their ways, their identities, and claiming their authentic lives. There still isn’t enough support for many LGBTQ+ youth, who may ask themselves, “What the hell is wrong with me? Who am I? Who will I tell? What can I get away with? Will I tell my parents, my brothers and sisters, my best friend? Will they accept me?”

I want them to know: if they can make it to adulthood, they will be in a society which in general is more accepting, supportive, and embracing of them every day. I want them to know we can not only survive, we can thrive.

I get that the world’s not gay. But I also understand clearly that we are here, and so we must have a place in it. I will not apologize for myself anymore because I realize I have had a charmed life, and more importantly, a positive impact on the world and the people around me. ▼

Mister, Are You a Lady? is available on amazon.com; it is also available as an audiobook on Amazon and iTunes narrated by Andrew Charlton.

Roi Barnard is a North Carolina native, a decades-long Washington, DC resident, and a long-time Delaware resident now living in Hockessin. A docufilm based on Roi’s life is in the works.