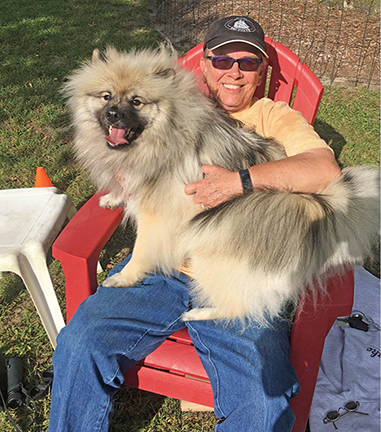 The Sound of Music

I have a great resume—at least, I think so. Its two-page length highlights positions with several major companies. Add to those credentials a third page with dozens of plays directed or written and I thought “Wow, I’m really something!”

Then I met Dr. Boden Sandstrom. Her CV sits on my desk as if mocking me for my puny exploits. I’m a community theater legend (in my own mind); she’s a real-life legend—librarian, researcher, video technician, community organizer, technical producer, sound engineer, professor, archivist—an icon of the DC female liberation movement and the women’s music scene for 40 years. Plus, her resume is nine pages long.

As I sat in her cozy living room cuddling with her Keeshond, Smokey, I found a woman so amazing, so disarming, so gracious that I immediately took to her. Her life has been filled with proud achievements and profound tragedy. In a word, she moved me.

What were the things that made her the woman I chatted with that Monday? During her college years, the Vietnam War grew, and Boden’s political activism followed suit. When she moved to Boston, she served as the volunteer office manager for the Greater Boston Peace Action Coalition in 1970. She also became a part of the new women’s liberation movement.

In 1974, Boden moved to Washington, DC. In DC, she met Casse Culver, a singer/songwriter and sound engineer, who was already very involved in the growing women’s music scene. They became business partners when they founded Woman Sound in 1975, leading to an on-and-off-again relationship that lasted a few years. Eventually, Boden became sole proprietor, renaming the company City Sound Productions. Clients included the Smithsonian Institution, RFK Stadium, the American Folklife Festival, the DC Committee to Promote Washington, the Warner Theater, Constitution Hall, and many others.

Over the years, she did sound production for many of the major political events staged on the Mall, including gay and lesbian rights rallies, the March for Women’s Lives in 2004, and every National Organization for Women event held in Washington from 1975 to 1993. Boden was also deeply involved with the women’s music scene, doing the sound for DC-area events, as well as the internationally-acclaimed Michigan Womyn’s Music Festival for over a decade (1976-1987). In 2002, Boden served as co-producer on Dee Mosbacher’s award-winning documentary, Radical Harmonies: Woodstock Meets Women’s Liberation in a Film about a Movement that Exploded the Gender Barriers in Music (you can find it on eBay). Around that experience, Boden and Casse renewed and cemented their relationship.

Before retiring in 2013, Boden taught at the University of Maryland for 10 years. She was a lecturer in ethnomusicology (the study of music as culture) and she also managed her division’s world ensembles while performing other services for the university. At Maryland, she remained a relentless activist for better gender representation and the rights of the LGBTQ+ community. As a pioneering female sound engineer, Boden pushed the boundaries, improving opportunities for the women who would follow her.

While vacationing in the Rehoboth area in 2016, Boden and Casse fell in love with a charming 1855 house in the middle of Milton, which they ended up buying. Then, Casse was diagnosed with lung cancer. An accomplished home renovator and landscaper, Casse made their house a home despite her illness. Boden still lives there. She lost Casse to cancer in 2019, but still loves the home they created.

Boden is a big believer in CAMP Rehoboth. She couldn’t work with them much while she was taking care of Casse, but seized the opportunity to curate CAMP Rehoboth’s Stonewall exhibit. The exhibit illuminated many of the signature moments of the Women’s Music Movement from the 1970s to the 1990s and highlighted many events in which Boden was instrumental.

How does Boden spend her days in “retirement”? She works with the Rainbow History Project to collect, preserve, and promote an active knowledge of the history, arts, and culture of DC’s diverse LGBTQ+ communities. Rather than resting on her laurels, she is also archiving her boxes and boxes of papers, as well as Casse’s, to donate to the Sophia Smith Collection of Women’s History housed at Smith College.

And she is still committed to her life’s work, sharing what she has learned with her community of women. That, more than anything, is why she believes that “daily living is a joy.”
Her life has been so much more than the nine pages sitting on my desk. ▼