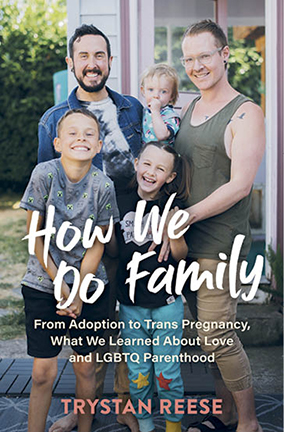 How We Do Family: From Adoption to Trans Pregnancy, What We Learned About Love and LGBTQ Parenthood
by Trystan Reese
c.2021, The Experiment
$24.95/$32.95 Canada, 216 pages

There is no picket fence in front of your house.

There’s no singing milkman to bring your breakfast and the next-door neighbor doesn’t coffee-klatsch with you every morning after your two-point-five kids go to school. There’s not, in fact, one 1962-normal thing about your home or your family but as in the new memoir, How We Do Family by Trystan Reese, what you’ve got is better.

Parenthood was never on the table. Finding love seemed hard enough for Trystan Reese, perhaps because he “came out as transgender at age nineteen” and hadn’t had “any models for healthy non-heterosexual relationships.” Still, Reese knew he “was a boy who liked other boys” and he “fell in love...almost immediately” with a man named Biff.

They decided to weigh their relationship deliberately—no rushing—but there ended up being a complication: Biff’s sister was having problems, and his baby niece and toddler nephew were caught up in the situation. Though Reese and Biff had only been dating for about a year and they were living together in a non-child-proof apartment, there was no questioning what to do. They stepped in to care for both children.

It was not all instant Mary Poppins.

Biff’s niece had a nasty case of diaper rash. His nephew was “profoundly traumatized” and couldn’t handle loud noises. Communication was basically via hand signal. But the longer the kids were with them, the deeper in love Reese fell for them, and for Biff.

The two men got engaged in the middle of a small concert, and although marriage wasn’t legal in the area in which they lived, they married anyway before formally adopting the kids and then settling down to a happily ever after.

And yet, there was something nagging at Reese. He’d always dreamed of a dark-eyed baby and felt that it was meant to be his. Though he’d been a trans man for about a decade, it was still possible for him to give birth. He’d have to convince Biff, but...baby? Maybe?

Not to be a spoiler, but you know the answer. The story itself might even be familiar, too. When there are so many trans-man-gives-birth books on the shelves today, why should you read How We Do Family?

Because author Trystan Reese goes beyond.

This isn’t just an angsty, tizzied, nervous story of boy-meets-boy, boom-instant-family. It’s also somewhat of a guidebook, going beyond with hints and reminders for LGBTQ parent-caretakers, and pages of advice snuck between chapters in a gentle, non-intrusive manner that feels like an arm around the shoulder. This, plus Reese’s unabashed willingness to be frank and his work as an activist give readers the ability to trust the veracity of what they read. Win-win.

One thing: be warned. In How We Do Family, Reese details his first pregnancy, which ended in miscarriage, and the account follows the rest of the book’s no-holds-barred frankness. It’s graphic, but it’s a part of the story—maybe your story—so if you’re doing family your own way, then pick it up. ▼