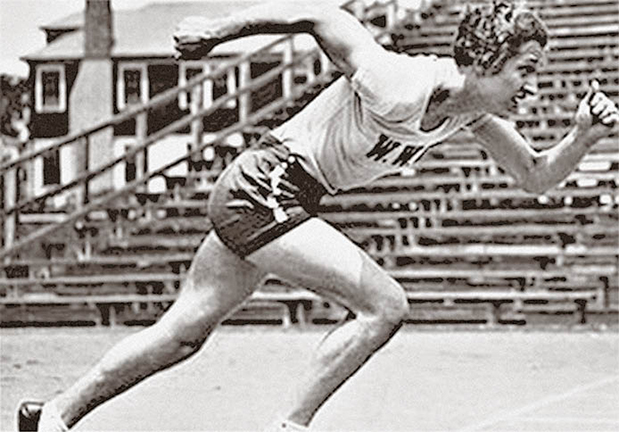 Making a Run for It: Helen Stephens

The big story of the 1936 Berlin Olympic Games was the humiliation of Adolf Hitler and his “master race” (white, preferably German) nonsense by the gold medal winning triumph of African-American athlete Jesse Owens.

But there was another American story in the 1936 games, one which created waves at the time but has since faded somewhat as stories of accomplished women unfortunately tend to do. Now, make no mistake, Owens deserves every round of applause, every accolade he received for his accomplishments. But the almost-lost story I’m referring to is about the accomplishments of an athlete who made mincemeat of the Hitlerian interpretation of ideal womanhood: the story of Helen Stephens.

Born in 1918 to a poor farm family in Fulton, Missouri, Stephens’ athletic prowess showed itself early. By her senior year in Fulton High School, where she earned the nickname “The Fulton Flash” for her speed and power, Stephens’ athletic talent attracted national attention and she was included in the 1936 American Olympic team. She was barely 18 years old.

Stephens wowed ’em at the Olympics. She won the gold medal in the 100 meter sprint, defeating the reigning champion, Poland’s Stanislawa Walasiewicz (simplified to Stella Walsh when she immigrated to America), setting a new world record of 11.5 seconds. The record would not be broken for 24 years.

She won another gold as the premier runner for the American 4x100 meter relay team. Throughout her racing career, Helen Stephens never lost a race.

But her story is more than just one of athletic prowess and success. Helen Stephens had chutzpah. According to historian David Wallechinsky and biographer Sharon Kinney-Hanson, Stephens, upon being congratulated by Adolf Hitler for her gold medals, ignored his Nazi salute greeting and responded instead with only what she described as “a good old-fashioned Missouri handshake.”

Stephens’ triumphs, both athletic and personal, at the Berlin games were nevertheless shadowed by the libel that she—and Stanislawa Walasiewicz/Stella Walsh—were not women at all but were men competing as women in order to have an advantage over female competitors. After humiliating physical examinations, Stephens was confirmed female. She then sued Look Magazine for its sordid front-page story, complete with a photo of the formidably built 6-foot Stephens, “Is This A Man or a Woman?” She won the suit. (Interestingly, an autopsy performed on Stella Walsh after her death in 1980 revealed she was indeed intersex) The controversies—and humiliations suffered by Stephens and Walsh—sadly prefigure the controversies regarding gender absolutism in athletics today.

But these insults did not stop Stephens from living a full life, a life lived on her own terms. After the 1936 Berlin Games, Stephens continued a career in sports, even teaming up with fellow American gold medalist Jesse Owens for a tour of exhibition races. She played pro women’s baseball and softball, and in 1938, Stephens was the first woman to own and manage a women’s semi-pro basketball team, the Olympic Co-Eds. She maintained ownership and management until 1952.

Though sports was at her core—she continued to win track and field events even in her 60s, competing in the senior divisions—Stephens’ post-Olympic life also encompassed a stint in the Women’s Marine Corps Reserve during World War II, and afterward a successful career as a librarian in the research division of the US Aeronautical Chart and Information Service.
But what of a personal life? At a time when same sex relationships were illegal, and exposure of involvement with a same sex partner was dangerous, Helen Stephens did indeed find fulfillment in the arms and heart of Mabel Robbe. I could find very little written about Robbe, only that she divorced her husband, midwestern businessman Frank Robbe on the grounds of drunkenness—thereafter becoming Helen Stephens’ “companion”—and that she had been a dietitian at Francis Shimmer College. The couple remained together until Robbe’s death in 1986.

Though Helen Stephens hasn’t been entirely forgotten—after all, she is in the Olympic history books—her story has been overshadowed by Jesse Owens’ triumph over Nazi racism and the star power of the era’s other great woman athlete, Babe Didrikson. Though Stephens lived a quieter, more reserved life than Didrikson, her contribution to and lifelong support of women’s sports is estimable. Finally, in 1975, Helen Stephens, champion athlete, devoted lesbian partner for nearly 40 years, was inducted into the National Women’s Hall of Fame. She passed away in 1994.

Women have come a long way in sports since then, and lesbians have often been at the forefront of women fighting for respect in professional sports. Before there was Brittany Griner, before Megan Rapinoe or Simone Biles, even before Billie Jean King and Martina Navratilova, there was Helen Stephens, “The Fulton Flash,” making her run for the gold in sports, in love, in life. ▼