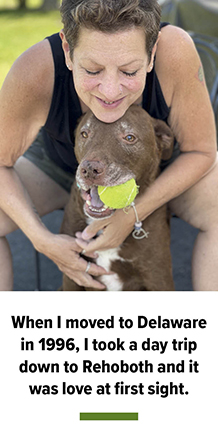 Spotlighting One of Our Own

This issue, we turn the spotlight on CAMP Rehoboth volunteer Karen Laitman, who typically writes this column!

Born in New York City, Karen moved to Raleigh, North Carolina, when she was 10 years old and, in 1996, to Delaware. In the 1990s, she worked in the travel industry at American Airlines and for 15 years for American Express Travel in Wilmington, Delaware. While working at American Express, her director walked around the office one day with his daughter, who was 10 years old. In what seemed like the blink of an eye, the same director walked around the office with his daughter again—but now, she was going off to college.

Karen had a “come to Jesus” moment. She knew she wanted more from her life; she wanted to work with people with developmental and learning disabilities. She wanted to be an art teacher and help kids be empowered and confident.

At the age of 40, Karen received her bachelor’s degree in behavioral science, and then her master’s degree in special education. For over 20 years, Karen has worked with people with developmental disabilities and has found her meaning and purpose. Karen works for the State of Delaware with the Division of Developmental Disability Services; she loves every second of every day.

What is your best memory of volunteering with CAMP Rehoboth?
My best memory is a very recent one. I volunteered at the Jennifer Holliday concert at Sun Festival this year. I was asked to run an errand: Ms. Holliday wanted a hot cup of tea in ceramic mug. I ran as fast as I could, out of the convention center down to the Cultured Pearl. When I got there, I told them that Jennifer Holliday was appearing in concert, and she wanted a cup of tea in a mug. They gave me a pot of hot water, a ceramic mug, and several teabags. I ran back to the convention center. When I arrived, I was ushered to the back room where Ms. Holliday was. I put the pot of hot water and mug with tea bags on the table and turned around to leave. Ms. Holiday asked me my name, looked me in my eyes, and with all sincerity said, “thank you, Karen.” That was my best volunteering-with-CAMP-Rehoboth memory to date.

How long have you been coming to Rehoboth?
I spent a lot of time in Washington DC in the 80s and 90s. Everybody would say that they were going to Rehoboth for the weekend. I never knew what that meant. When I moved to Delaware in 1996, I took a day trip down to Rehoboth and it was love at first sight. I officially moved to the Rehoboth area in 2008.

If you had an extra hour in the day, what would you do?
I have four amazing dogs (Michael, Chloe, Dolce, and Princess Puglet). I would spend that extra hour loving on all four of them.

The LGBTQ community has made significant progress in the fight for equality over recent years. Did you expect to see this in your lifetime?
In the 1980s, several times I went to the marches on Washington. I remember going to gay pride in North Carolina in the 1990s; one year it was supposed to be held in Raleigh, but that particular year they had us double-booked with a KKK rally. We were relocated to Duke University, in Durham, North Carolina.

When I went to gay pride events in the 80s and 90s the lesbians, gay men, and the transgender community were very low-key, restrained, and modest to a degree. I have seen the pendulum swing. Three years ago, I went to Philadelphia’s gay pride, and I was in awe. The teens, the kids, the younger generations were “OUT and PROUD.” It was simply amazing to see the multi-generational, cultural openness to our LGBTQ community.