At first, I believed writing A Belief in Her—a historical romance with an adventure theme—would be pretty straightforward. I was wrong. Trying to capture elements from an era that was rife with political dissent and war-time tragedies was new to me.

I was barely into my teens in the 1970s, so my recall of the era was all wine and roses. Due to my innocence, I viewed the world through rose-colored glasses. Ever the stereotypical tomboy, my days were spent pounding the pavement from sunrise to sunset, creating my own adventures. I wore the frayed bellbottoms and the puka shell necklace. I listened to the radio’s top-10 song list and went to a movie matinee every Saturday afternoon.

But then, as I grew older, I realized the world was not so carefree as I had once imagined it. And the era of Vietnam became, for me, almost an obsession of learning the truth. So after endless research, A Belief in Her transformed from an idea into a novel. And although I tried to avoid making the novel too graphic in its depiction, I also wanted it to be a solid reminder of the brutality that goes hand-in-hand with war.

I grinned and frowned at the same time when I was invited to write about “the writing life” and this new novel. It’s surely a life filled with many hurdles. Character development, plot lines, engaging dialogue. Ugh. No easy task. One day I can type out five to 10 pages with ease. Others.… Well, let’s just say that in the old days when a manual typewriter was all I had, I wasted a ton of paper and many bottles of liquid Wite-Out.

And then, once the novel is finished, there still is the task of finding a publisher, which is also a challenging—and often discouraging—journey. I can honestly say that on more than one occasion in the process, I lose heart but resolve to keep going. And then…success!

But the roller coaster doesn’t stop there because, once accepted, edits are required to make the novel truly come to life and capture a reader’s attention from start to finish. Although often frustrated by the process, I realize A Belief in Her would never have been written to the best it could be without the guidance and patience of editors.

A Belief in Her is a story that begins when Claire McCollum, an American Red Cross Vietnamese Interpreter, and Maggie Calder, a Captain in the USAF, discover love in war-torn Vietnam in the months leading up to the fall of Saigon.

Stationed on an air force base in Southeastern Vietnam, the two band together to pursue a mission of mercy that defies all odds.

But the truth may not be what Claire expected and knowing it may place beliefs she holds dear in jeopardy.

A Belief in Her explores many themes, such as a woman’s search for the truth; a race against time and a fight for survival; a belief in love’s endurance; and, most of all, a woman’s will to endure life’s challenges no matter what the cost to her happiness or personal freedom.

I dedicated the book to our brave civilian and military forces who have fought, and continue to fight, in the name of peace and justice. It is my way of letting them know that although many years have passed, their heroism and devotion are not forgotten. I also hope that reading A Belief in Her will inspire readers to share this sentiment.▼ 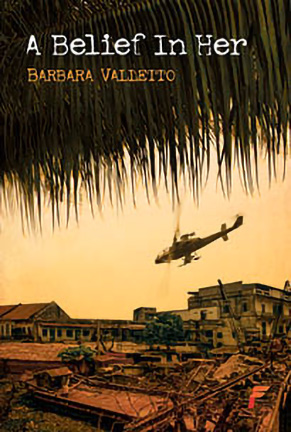 A Belief in Her is not my only book; I’ve written four other gay-themed novels: Pulse Points, Everlong, Limbo, and Diver Blues. Synopses of all of these books can be found at flashpointpublications.com

Barbara has been writing fiction in the suspense/mystery, psychic/supernatural, and horror/thriller genres since the mid-1970s. A native Philadelphian, Barbara retired to Lewes, Delaware. Her free time is spent enjoying her family and friends, and any activities that involve being on, under, or near the ocean.