Every Thursday evening from early May to late September, a group of enthusiastic golfers of various ages gather at the American Classic Golf Course for a round on the fairways and social hob-knobbing. The CAMP Rehoboth Ladies Golf League has been going strong for about 12 years thanks to the enthusiasm of its members.

And thanks also to the dedication of its volunteer captains over the years, including long-time organizers Barb Thompson and Evie Simmons (who also ran the annual Women’s FEST golf outing), Donna Dolce, Jo Picone, and now, Rina Pellegrini. (For more on Evie, see We Remember, page 106.) 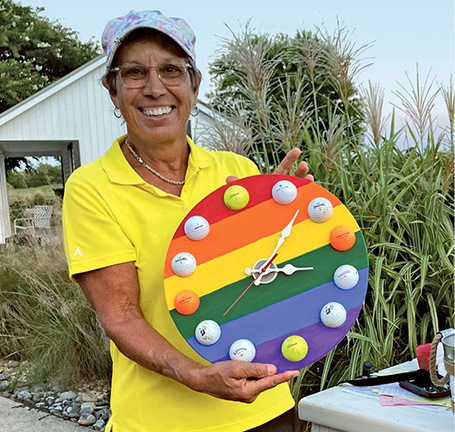 Thirty-six ladies play each Thursday on the nine-hole course in a shotgun format intended to accommodate as many as possible. Eighty-five women belong to the league. Members use an online sign-up sheet each Tuesday morning to register, and it fills quickly.

Pellegrini pairs players each week. She has been playing golf off and on for about 30 years and has been in the league for about 10 years. This summer was her first as captain.
“The best part of the league is the camaraderie,” she says. It is a sentiment that is echoed by many in the group.

“I try to mix up the players so they can meet people,” she says. “There is a wide range of handicaps, but the scores are usually very close. It’s a scramble so everyone has a chance to win.” Pellegrini gives prizes for the player who has the fewest number of putts and the player who is “closest to the pin” on the designated hole.

Prizes are awarded after play when most golfers are gathered on the clubhouse patio. The clubhouse grill is open so golfers can order food and beverages before and after play. 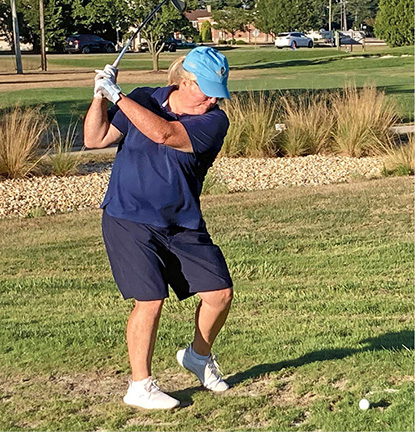 Pellegrini gives the course staff high marks. “I love American Classic,” she says. “They are so great to work with and very flexible.” The staff is headed up by pro and Golf Operations Manager Austin Ebersole who also happens to be ranked #4 in the world for a new activity known as Fling Golf.

The course is not a par three. There are two water holes and one par five. The rest are par three or four.

The league ladies come from all walks of life. Some are retired. Others still work. Two are in the band Off 24.

Jennifer Leonard and Claire McCracken joined in 2015 and have watched the league grow. “Then, it was never full, with maybe 12 golfers most weeks,” says Leonard.

McCracken grew up in Ireland. Leonard hails from Philly. She started hitting balls with her brother on a driving range. McCracken is an avid sportsperson who started playing golf 17 years ago. Both accomplished golfers, they agree that the league is a great asset for both experienced golfers and beginners.

One night, she was on a team that scored a rare clean sweep with the foursome placing first, Renee Guillory taking closest to the pin, and Leonard having the fewest putts. Mary Jo Tarallo and Linda Rikard benefitted from their expertise.

Linda Porto says she is a beginner. She retired in 2015 after 35 years as a project support manager for an engineering firm in New Jersey. “I am a social person, and the league is a form of socialization for me,” she says. 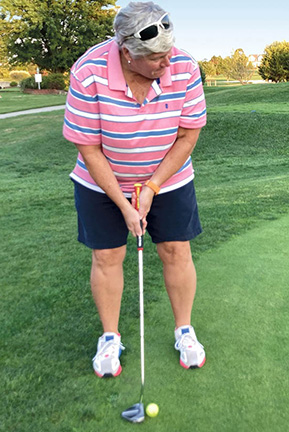 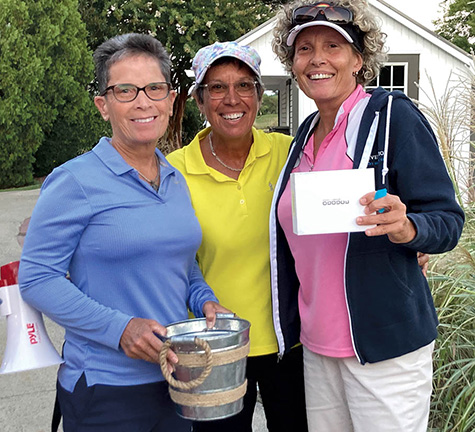 Porto has taken some lessons from a friend and from Ebersole. One Thursday night not only did her team come in first, but she won a prize for having the fewest putts.

Still actively working, Kelly Sobel has been playing in the league for about three years; Sobel gives thumbs up on the camaraderie.

Robin Esham and Lisa Mosely are among several members who also play in the women’s softball league (not a CAMP-sponsored event) that Pellegrini organizes. They are competitive golfers but don’t take themselves too seriously. They just want to have fun. 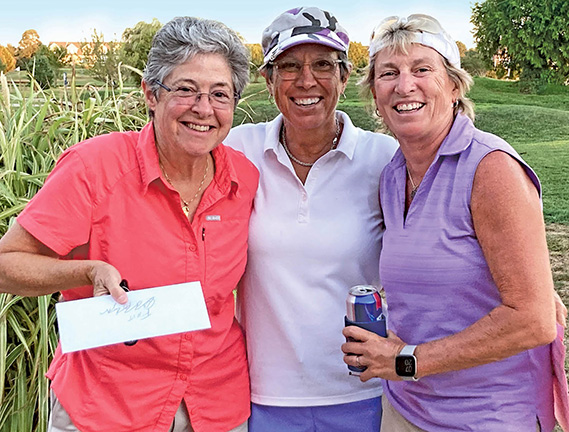 Jo Picone and Kathy Bostedo joined in 2017. They own KPG Global (logistics) although Picone is semi-retired. She was league captain for two years during COVID. She credits Kathy for introducing her to golf.

“Kathy is much better than me, but the challenge is still exciting,” she says. “There is always that one great shot that brings us back plus the hope of having to buy everyone a drink after that bucket list hole-in-one. So far, the closest I have come is an eagle on hole 2. I still savor that moment.”

CAMP Board member Pat Catanzariti knows the hole-in-one feeling: she scored one recently while also snagging the closest to the pin prize.

The season culminated with a party sponsored by KPG Global and the feeling that many strong friendships were formed over the summer. Play continues on a less formal basis now that the season has ended. ▼