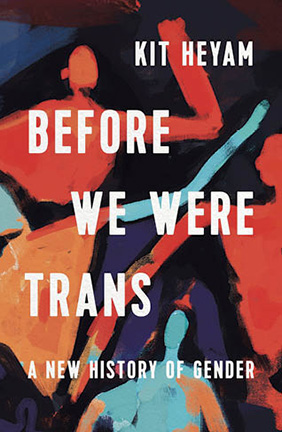 No, there wasn’t a need for them without a vehicle to go where people only dreamed of going. But yes—the word “astronaut” is more than a century old. Words and labels matter, as you’ll see in Before We Were Trans by Kit Heyam, and time is no excuse.

On the evening of June 8, 1847, John Sullivan was apprehended by gendarmes while weaving down a sidewalk in London. Sullivan was wearing a few women’s garments, and was carrying more, all of it stolen. Because it wasn’t the first time he was arrested, he spent 10 years in an Australian penal colony for his crime.

“Is this story a part of trans history?” asks Heyam.

There aren’t enough clues to determine Sullivan’s truth, not enough “evidence that their motivation for gender nonconformity was not external, but internal....” The answer’s complicated by the fact that “transgender” wasn’t even a word during Sullivan’s time. Presumably, Sullivan was white but even so, we must also consider “that the way we experience and understand gender is inextricable from race.”

Surely, then, Njinga Mbande, the king of Ndongo, can be considered trans; they were assigned female at birth but presented themselves as king, as did Hatshepsut of Egypt. In precolonial Nigeria, the Ekwe people were gender-fluid, to ensure that there was a male in the household. Do political and social reasons fit the definition of trans?

In England, it was once believed that to dress like the opposite sex was to become that gender. In prison camps during World War I, men participated in plays to ease the boredom, and some ultimately lived permanently as women. Early history shows many examples of people living as “both.” Were they trans or not?

Says Heyam, “historians need to tread carefully and responsibly when we talk about the histories of people who blur the boundaries between intersex and trans.”

Moreover, can we allow that there’s probably some “overlap”?

The answer to that could depend on your current situation and mindset. Absolutely, author Kit Heyam dangles their own opinion throughout this book but Before We Were Trans doesn’t seem to solve the riddle.

Judging by the narrative here, though, it’s possible that it may be forever unsolvable. There’s a lot to untangle, often in the form of partially-recorded tales that hark back to antiquity and that are shaky with a lack of knowable details. Even Heyam seems to admit sometimes that their thoughts are best guesses.

And yet, that tangle can leave readers with so much to think about, when it comes to gender. Ancient attitudes toward trans people—whether they were, indeed, trans or acted as such for reasons other than gender—absolutely serve as brain fodder.

This is not a quick-breezy read; in fact, there are times when you may feel as though you need a cheat-sheet to follow similar-sounding names. Even so, if you take your time with it, Before We Were Trans may put you over the moon. ▼