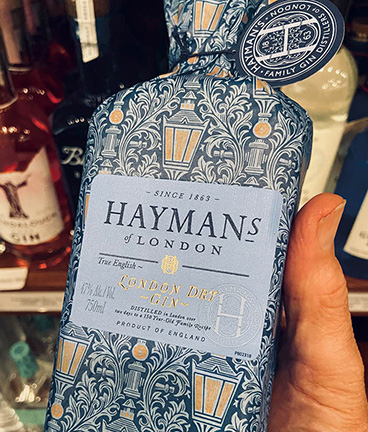 The Intoxicating Story of Gin

I don’t know about you, but often when I step into to a liquor store, I sort of feel as if I’m visiting a museum. Especially when I gaze upon all the dazzling gin bottles with their artistic and elegant labels showcasing fruits and flowers and touting sensual botanical flavors like vibrant butterfly pea blossom, emerald grass, and white pepper.

It is amazing how a simple spirit derived from grain and flavored with juniper berries has become so trendy these last few years. I can recall when Bombay Sapphire gin appeared on the scene. With its blue bottle and label featuring the bulldog-like image of Queen Victoria, it was the height of sophistication. Now it sits on one of the lower shelves. Like wine, vodka, and bourbon before it, I suppose it was just a matter of time before gin experienced its craft-y, small batch-y, renaissance.

Gin is an old concoction, born in the Netherlands in the early 17th century as a medicine to treat lumbago until wealthy businessmen in Amsterdam developed a taste for “genever”—as it was known back then. The Dutch East India Company helped spread the spirit around the world while simultaneously bringing back new botanical flavors from afar to Dutch distillers.

Dutch gin eventually made its way across the North Sea to England where it found receptivity in and around English port cities. It became more popular and cheaper when unsavory entrepreneurs began replacing juniper berries with oil of turpentine, salt, sugar, and water and marketing it with great success in the slums and fleshpots of London.

By the 1750s, writers and politicians warned of a national gin craze and blamed the spirit for murders, suicides, debt, and prostitution. Artists brought the depravity to life on canvas and paper in scenes like Gin Lane (housed today in London’s Tate Museum), depicting the evils caused by gin, including a baby impaled on a fireiron. The government responded to polite society’s moral outrage by levying a tariff on gin and cracking down on gin houses in poor neighborhoods. Gin production declined by a third.

It took the British mixing gin with tonic to help battle malaria, and Americans inventing the cocktail (in particular the martini made with gin) in the late 19th century to allow the spirit to regain its respectability. The Roaring 20s and Prohibition with its iconic flappers and speakeasies made gin fashionable in America. Hollywood and Madison Avenue glamorized the martini (still made primarily with gin) as the essence of post-War American prosperity, power, and style.

Until it wasn’t. By the 1980s, American tastes were turning to wine and vodka. Gin seemingly had lost its way, viewed by the younger generation as something favored by melancholy senior citizens sipping from plastic cups on a bed in a cheap motel.

At least that’s the story most cocktail historians tell. Personally, I remember the 80s and gin a tad differently. Gin-and-tonics on sunny spring afternoons at steeplechase races and garden parties, the men in blue blazers and Ray-Ban sunglasses and the women in flowery sundresses and colorful hats. Happy hours in DC when the fellas would step off the hot sidewalk into the air conditioning at JR’s for a refreshing G&T after a long day of work. In both cases there may have been plastic cups involved, but nobody was gloomy.

Yes, the story of gin is a spirited one. If you like the spirit, then I highly recommend the Book of Gin by Richard Barnett. No, he’s not a relation, but we both share a fondness for gin and his colorful account of the history of this intoxicating spirit makes for a fascinating read. And he’s right on when he suggests now would be one of the best times in gin’s 500-year history to give it a try.

I tend to agree with Barnett. But the choice of which gin to try is almost overwhelming when you’re looking at a hundred different beautiful bottles.

Personally, I tend to favor a London dry gin with a clean, distinctive juniper berry taste. I’ve taken a recent fancy to Hayman’s, which is a London dry distilled by the oldest gin-making family in London, dating to 1863. Plymouth Gin is a tad sweeter, but I like it too, and if you want to try the classic gin used in the original martini recipe then this is your brand.

Gins touting off-the-wall botanicals certainly have the most appealing labels. While they sound intriguing, I feel they can sometimes taste a bit weird. A recent trend I’ve noticed is the aging of gin in whiskey and wine barrels to impart a different flavor profile, but frankly, that just confuses me. You can call me a traditionalist; I just think gin should taste like gin. And make your lower back feel better. Cheers! ▼