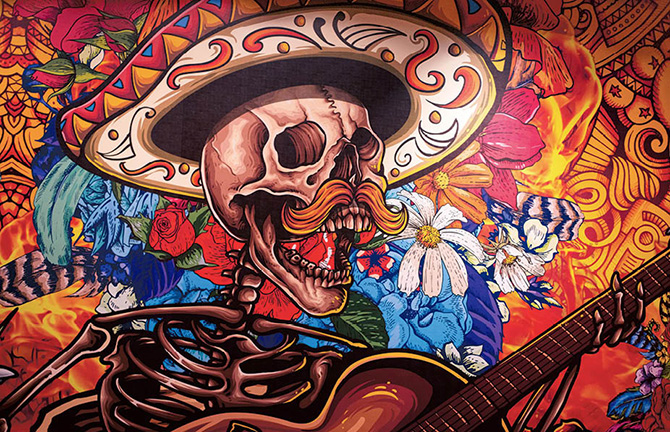 Honoring the Dead and Celebrating Life

“Culture is what, in death,
continues to be life.”
- André Malraux

Day of the Dead, Día de los Muertos in Spanish, is a spiritual custom of celebrating and honoring the lives of the deceased. Observed in many areas of Latin America, mainly in Mexico, festivities occur on November 1 and 2. The souls of the dead come to reunite with their loved ones in the mortal world.

The living, spiritual presence of loved ones who have passed on materializes on an altar, or ofrenda, the centerpiece of the celebration, which serves as a way to welcome spirits back to the realm of the living. Showcasing key offerings to please the dead, this practice of building an altar derives from Indigenous traditions of providing supplies for the souls to embark on their journey to the afterlife. Ofrendas are elaborated at home or at the gravesite of the deceased and facilitate a point at which family and friends gather to spend time directly with the spirit of their loved ones.

A variety of traditional cuisine is an integral part of the preparations. Dishes such as pan de muerto (bread of the dead), yeast-based sweet egg bread, calabaza en tacha (candied pumpkin), and tamales help nourish and please the dead upon their return to the land of the living.

Lighted candles guide the spirits to the altar, beverages quench their thirst, and their favorite items adorn the altar to bring comfort and familiarity. Prominent symbols such as the calavera (skull) adorn the ofrendas, as well as papel picado (paper banners) and cempasúchiles (marigolds).

Tissue paper elaborated with intricate designs hangs around altars and in the streets, serving as a reminder of the fragility of life and acting as a type of portal or guide for spirits to pass through. Cempasúchiles, the flowers of the dead, lure souls from their places of rest to accompany their families and join the celebration.

Día de los Muertos originates in the traditions of pre-Hispanic Meso-American civilizations. Its evolution to align with All Saints’ Day stems from Roman Catholic influence. This combination is a consequence of the brutal Spanish invasion of the Americas in the 16th century, where Catholicism exerted a violent force to destroy Indigenous culture and justify exploitation. Day of the Dead, in part, is an act of reclaiming Indigenous culture in the context of the aftermath of Spanish colonization.

Meso-American civilizations held a distinctly different notion of death and time from that of the modern Western world. Juxtaposed with linear time, which focuses on irreversibility by the existence of a beginning and end, the cyclical concept of time holds the notion that the present reflects the past and vice versa. This culture honored death and considered it a step in the cycle of nature, observing it as a kind of living presence, a transcendence of eternity.

Family persists as a fundamental theme in the context of Latin American culture. Despite death, one’s lineage and ancestors continue to exist through the act of remembering and thereby maintaining a personal relationship with the dead.

The reality of life is that the only certainty is death. The main focus of Día de los Muertos is to honor and embrace life instead of mourning the seeming permanence of death. It is not a somber occasion to be feared and cowered to but rather an intimate, joyful reunion between the spirits of the dead and their loved ones in the mortal world. Instead of ceding to physical loss and apprehending an opportunity for renewal and solace, the joy of reconnection serves as a call to embrace life in an explosion of color and tradition.

The concept of the afterlife underpins the Day of the Dead celebration, and the act of remembering connects generations. Death is not to be feared; it is simply an integral, ever-present part of life that, sooner or later, we must face and learn to accept. In this way, death is an essential lens through which life is perceived and lived. A coexistence with death allows for the appreciation and celebration of life. ▼

Rachel Orga is a graduate student at the University of Buenos Aires, School of Law, pursuing a Master’s in International Relations. Her favorite Día de los Muertos tradition is the generational sentiment behind the celebration and altar, especially when accompanied by music, such as “La Llorona” by the renowned Chavela Vargas.