Queer Faces among the Dozens Cast in Poker Face

Casting roll call time! Filmmaker Rian Johnson (Knives Out, Star Wars: The Last Jedi) has assembled an enormous cast for his next project, the 10-episode Peacock series Poker Face. It’s a mystery-drama and being referred to as something of an anthology series (which may mean interconnected characters or plots among its discrete episodes, who knows) and otherwise it’s a locked down vault situation where plot details are concerned. Now, to list the dozens of people booked for this thing would turn into a TLDR situation, so we’ll begin with the queer cast: Tony and Emmy winner Cherry Jones, Clea DuVall, Jameela Jamil, and honorary member of the LGBTQ+ community, Judith Light. They will be joined by—deep breath—Natasha Lyonne, Luis Guzman, Hong Chau, Reed Birney, Adrien Brody, Benjamin Bratt, Chloe Sevigny, Ellen Barkin, Joseph Gordon-Levitt, Lil Rel Howery, Nick Nolte, Ron Perlman, S. Epatha Merkerson, Simon Helberg, Stephanie Hsu, Tim Blake Nelson, Tim Meadows, and more, more, more. Sometimes you get quantity and sometimes you get quality and it’s clear that Johnson is giving us both. ▼

Turn it to Tig in the Morning 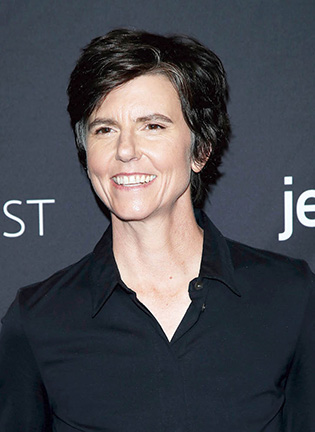 Cross prestige television’s serious-minded exploration of real-life issues with messy, back-stabbing, workplace soap antics and you have the not-so-secretly trashy, exceptionally entertaining Apple TV+ series, The Morning Show. And going into its third season, the world-building that involves famous media faces deeply mired in personal hypocrisies can only benefit from adding more incendiary characters to the mix. That means upping the ante and casting allure with Julianna Margulies, who’ll be reprising her season two character, and adding Jon Hamm and Honk for Jesus. Save Your Soul. star Nicole Beharie to the roster. Meanwhile, out of comedy left field comes Tig Notaro, who’ll play corporate boss Hamm’s chief of staff. We already can’t get enough of Jennifer Aniston and Reese Witherspoon’s battling characters, and Notaro’s deadpan energy ought to be another thorn in, well, everyone’s sides. Rubbing our nostalgic Dynasty and Melrose Place hands together over this. ▼

The “Dark” legacy of Midnight Cowboy

This year’s Venice Film Festival was dominated by Don’t Worry Darling drama, and that sort of thing is always fun to gawk at, but there also were films that need the rest of our attention. One of them is a documentary about cinema itself, Desperate Souls, Dark City and the Legend of Midnight Cowboy, from filmmaker Nancy Buirski (By Sidney Lumet, The Rape of Recy Taylor). One thing it isn’t is a typical “making-of” doc. Instead, Desperate Souls is about the lives of the creative people behind the only X-rated film in American history to win the Academy Award for Best Picture. Those people include not just the actors Dustin Hoffman and Jon Voight, but gay author James Leo Herlihy who wrote the original novel, formerly blacklisted screenwriter Waldo Salt, and queer visionary filmmaker John Schlesinger at the reins. Be on the lookout for this one in the near future and get a glimpse of American culture and the place of gay men in it at a pivotal point in the 20th century. ▼

Danielle Fishel and Lance Bass Went to Prom
Now, it’s going to be a movie.

Dear children of the ’90s: Danielle Fishel and Lance Bass really do care about your needs. And they’re taking their real lives and turning it into art. See, back in the late ’90s, the Boy Meets World star and the not-yet-out NSYNC heartthrob were dating, and they went to her high school prom together. Classic gay boy and his high school girlfriend scenario. And it was a moment for Bass that caused him to realize he could be hurting his friend, and that he needed to address his sexuality and be honest about who he was. Still close friends today, the two have Lauren Lapkus and Marie Holland working on a script that lots of queer people who came of age not so long ago will be able to relate to, a story about what it means when young people love each other, just not in *that* way. Very early stages here, but more on this one as it develops. ▼