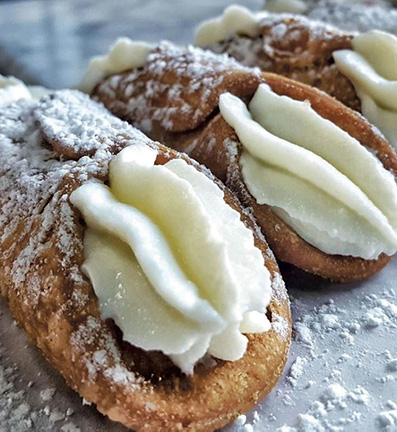 Well, I learned something this week. Nothing earthshaking, like discovering a new comet. No, this one had it beat. This week I learned how to say basil.

For years, I’ve been saying basil instead of basil. Hmmm, let me try that again. I say basil, as in the actor Basil Rathbone, which more than certainly betrays my age. Then this week, my wife Sally blows my mind with something that has been bothering her for years. It’s basil, she says. BAY-sil. Well, I say, what do I know? Other than it’s green (I think), I wouldn’t know basil if you poked me in the eye with it.

All this just in time, as we are in the very new foyer of the Coastal Highway restaurant Red, White and Basil. And although you can’t tell, I just pronounced it right.

Red, White and Basil is a primarily pasta-eating place brought to Rehoboth by restauranteurs Mark Hunker and Jeff McCracken from its previous DC location at Dupont Circle. These owners are quite busy, as they own many establishments, including Eden, JAM Bistro, and Coho’s Market & Grill. Their experience shows—they run a top-flight eatery, with attentive service and loyal, long-time staff.

The ambience at Red, White and Basil is aided by its eclectic style, comfortable layout, and lack of pretentiousness. The rooms have hanging pendants with vintage lighting, complemented well by the aubergine color of the walls. Adding to its appeal is its family-friendly atmosphere.

Let’s start our experience with the appetizers. Actually, we could end with the appetizers too. They were huge! Sally began with the Arancini Di Riso Sicilian, risotto fritters with risotto, mozzarella, and fungi Alfredo. So delicious. The sauce was Alfredo blended with mushrooms, adding a rich flavor to the starter.

I had the Beef, Pork & Veal Polpettes, which I think means bowling balls in Italian. Actually, polpettes are Italian meatballs. Red, White and Basil’s version was a more-than-ample serving of several meatballs two inches in diameter. They came with a marinara that was tangy and complex, garnished with fresh herbs. A great way to start the meal.

Although already quite full, we proceeded to order salad and soup. Sally had the Italian Beet Salad, a hearty mix of roasted beets, arugula, walnuts, and goat cheese. It was topped with a lemon Parmesan vinaigrette “to die for!”—Sally’s quaint way of expressing delight. I went with the soup, a creamy tomato bisque with a bit of heat provided by a touch of cayenne. These were dishes that did not disappoint.

On to the entrees. Sally had the Lasagna; I had the Linguini & Clams. Once again, the chef, Stephen Meyers, did not skimp on the helpings. Sally’s lasagna was the size of a brick, albeit a very tasty one! It was loaded with pasta accompanied by Bolognese, mozzarella, and ricotta. She also stretched the limits of her appetite by ordering cheese tortellini and shrimp, both cooked to perfection.

I blew my diet with the linguine topped with a generous number of clams, my favorite, along with a generous helping of Cod Puttanesca, a huge piece of fresh, succulent cod alongside fettucine, tomatoes, olives, and capers, in a spicy marinara. The freshness of the cod made this dish special, as did the accompaniments. All presented with tasty, soft-to-the-palate breadsticks.

A nice offering from the the Red, White and Basil menu is the three-course prix-fixe meal. For a very reasonable price, you can choose a pasta and sauce to your liking, with traditional add-ons such as chicken, meatballs, Italian sausage, shrimp, or primavera vegetables. This provides the discerning diner with thousands of combinations of food. Obviously, I’m bad at math, but there are several combinations nevertheless.

Believe it or not, Sally and I opted to try the desserts. The pastry chef is the same across Mark and Jeff’s eateries. Having eaten at several of those restaurants, we were confident that the desserts would be terrific. We were right. The tiramisu had a subtle taste of alcohol, the cannoli was a crispy delight, the cheesecake was creamy and light, and the limoncello was light and fluffy. Any one of these would be a great way to top off your meal.

Red, White and Basil has many features that set it apart from many restaurants in the area. Our attentive manager and server, Grant, pointed out that all pasta served at the restaurant is homemade. They go through 20 pounds of pasta an hour, almost all of it making its way to our plates. If you’re a pasta lover, try this restaurant. You won’t regret it!

And most of all, don’t make the same mistake I make all the time. It’s BAY-sil! You do not want Sally knocking at your door. ▼