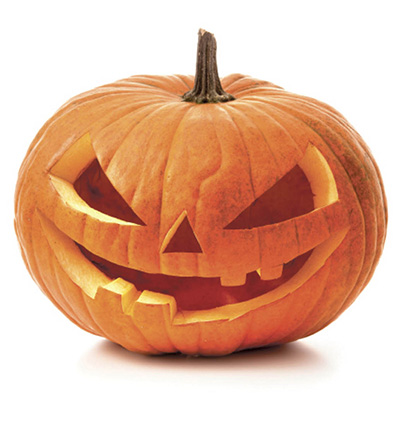 Jack-O’-Lanterns: Not Just for Kids

I can’t remember the last time I carved a pumpkin for Halloween. What I do remember is that it was a family event. It was a ritual that we performed right before Halloween.

The chosen pumpkin sat on our kitchen table where, under adult supervision, I carefully drew a creepy face onto its surface. My mom, aunt, and I would then huddle around my father, outside, while he methodically chopped off the top and carved the spooky face, creating a jack-o’-lantern.

The decapitated pumpkin returned inside to be cleaned out. The seeds were sorted and washed and sometimes even roasted. The innards were trashed. A candle placed inside was lit on Halloween night and carefully watched so no trick-or-treaters’ costumes caught fire. Once the jack-o’-lantern began to rot my parents tossed it into the trash.

As an adult living on Capitol Hill, carving a pumpkin never seemed worth the effort. My neighbors who did perform the ritual usually had kids. They often found that when they left their jack-o’-lanterns on their front porches, they were either smashed by neighborhood teens, or disfigured by squirrels—or worse, by rats, who took unsightly chunks out of the carved faces.

This year a story on my newsfeed caught my eye—the various uses for leftover pumpkins. One especially appealed to me: it can be a tasty treat for wildlife.

My backyard is adjacent to woods where I’ve seen deer, squirrels, rabbits, and foxes. It’s a perfect location for leftover pumpkin. You can also add into the jack-o’-lantern an assortment of fruits and vegetables such as carrots and apples.

Don’t want to attract critters around your house? You can donate your pumpkins to local farms where animals can enjoy the vegetable as a snack.

And don’t be quick to toss the pumpkin innards. You can roast and eat pumpkin seeds or, if you are like me and think that’s way too much trouble for too little return, then you can share them with birds. Larger wild birds like blue jays love pumpkin seeds. Roast them (without seasoning or salt) then either put them in a bird feeder or just sprinkle on the ground.

Another great idea is to turn your pumpkin into a bird feeder. Cut off the top half of the pumpkin and fill the bottom half with birdseed. Place outside for the birds to enjoy.

If you like to cook or bake, recipes that require pumpkin, from soup to breads, abound.

Carving pumpkins has been a part of Halloween for as long as I can remember. I wondered, “Where did this odd tradition originate?”

According to History.com, the Irish are credited with being the first to chisel creepy faces onto turnips and large potatoes. The practice is said to date back to 1667.

The name jack-o’-lantern comes from an Irish folktale about a man named Stingy Jack. According to the story, Stingy Jack invited the Devil to have a drink with him. True to his name, Stingy Jack didn’t want to pay for his drink, so he convinced the Devil to turn himself into a coin that Jack could use to buy their drinks. Once the Devil did so, Jack decided to keep the money and put it into his pocket next to a silver cross which prevented the Devil from changing back into his original form.

Jack eventually freed the Devil, under the condition that he would not bother Jack for one year. The next year, Jack again tricked the Devil into climbing into a tree to pick a piece of fruit. Jack carved a sign of the cross into the tree’s bark so that the Devil couldn’t come down until the Devil promised Jack not to bother him for 10 more years.

According to legend, when Jack died God would not allow him into heaven nor would the Devil allow Jack into hell. He sent Jack off into the dark night with only a burning coal to light his way. Jack put his coal into a carved-out turnip and has been roaming the Earth with it ever since. The Irish referred to this ghostly figure as “Jack of the Lantern.” It became, “Jack-o’-Lantern.”

Irish immigrants brought the tradition to America, home of the pumpkin, and it became an integral part of Halloween festivities. ▼

Pattie Cinelli is a writer who will be purchasing a pumpkin for the first time in decades, attempting to carve a scary face, roasting seeds for her birds, and after Halloween putting the remnants (what the squirrels don’t eat on her porch) into the woods behind her house so she can watch the deer and other wildlife enjoy it.