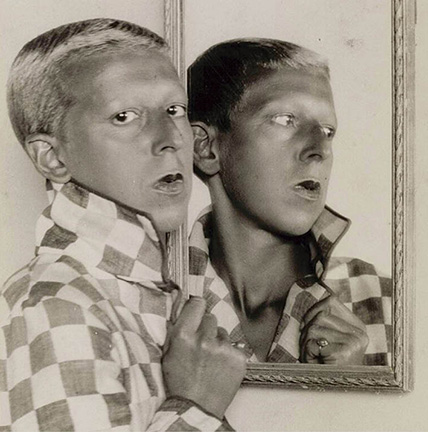 It’s almost Halloween, that wild and wacky night when our LGBTQ+ community dons our sequins and feathers, our sharp suits and fabulous ties, and our hair color spans the full spectrum of the rainbow. It’s our night to strut and prance, expressing the breadth of our community’s considerable creativity.

All of this costumed strutting and prancing carries with it a political edge: our statement of freedom. Freedom to be who we are; freedom to re-define who we are whenever and however we want; freedom to explore varieties of gender expression.

French artist and writer Claude Cahun didn’t wait around for the yearly arrival of Halloween to express gender fluidity through costume. The confluence of artifice, high art, and politics was the core of her life and work throughout the 1920s and ‘30s.

Born Lucy Renee Mathilde Schwob in Nantes, France on October 15, 1894, into a prominent intellectual Jewish family, she took the name Claude Cahun while a student at the University of Paris, Sorbonne, where she studied literature and philosophy.

After the Sorbonne, Cahun remained in Paris with Suzanne Malherbe, who also abandoned her feminine birth name and took the name Marcel Moore. Cahun and Moore remained intimate and artistic partners until Cahun’s death in 1954.

Their Paris was the Paris of the Jazz Age, when the arts flourished and sexual exploration was the talk of the cafés in Montmartre and Montparnasse. Cahun and Moore hosted a number of the city’s avant-garde at their apartment: literary entrepreneur Sylvia Beach (founder of Paris’s English language bookshop Shakespeare and Company), poets Henri Michaux, Pierre Morhange, and André Breton, and other leading lights of the Paris literary, art, and theater community.

Surrealism was in its heyday in the visual, literary, and performing arts, and the genre’s expanded and alternate realities suited Cahun’s sensibilities perfectly. Never one to be straitjacketed into a single gender, Cahun staged an ongoing series of self portraits―often with Moore behind the camera―which featured Cahun in male attire, female attire, even attire and makeup rendering Cahun as no specific gender at all, or blending the genders of various historical figures. She would color her hair, even shave her head completely for her photographs. Explaining her work and assorted personae, Cahun wrote “Masculine? Feminine? Neutral is the only gender which suits me,” in the publication Disavowals in 1930.

Cahun’s role-playing wasn’t limited to her self portraits. According to her biography posted by the French Ministry of Culture, Cahun was a member of the experimental theater troupe Plateau, where her expanded identities found expression in a variety of plays.

The age of creative experimentation came to an end with the threat of Hitler’s Fascism expanding out of Germany. As Hitler’s designs on Europe became clear, Cahun and Moore became active anti-Hitler propagandists. In 1937, when Cahun’s and Moore’s lives were no longer secure because of their resistance activities, they escaped to the Channel Island of Jersey, where they continued their anti-German propaganda, creating anti-Nazi films.

The Nazis, however, also eventually occupied Jersey, further threatening Cahun’s and Moore’s security. On July 25, 1944, Cahun and Moore were arrested by the Gestapo, imprisoned in a German military prison, and sentenced to death by the German Court Martial. There is anecdotal evidence that at her trial Cahun told the judge that the Nazis would have to shoot her twice: once as a member of the Resistance, and once as a Jew.

Cahun and Moore escaped death by the timely liberation of Jersey and the end of the war in 1945. Her health, however, was much deteriorated as a result of the harsh conditions of the military prison.

Though Cahun continued her explorations of gender and self after the war, her declining health eventually led to her untimely death only nine years later, at age 60, in 1954.

Much revered in France, Cahun was unfortunately forgotten in the post-War United States. Her work, and her creative and intimate association with Marcel Moore, were reintroduced to American audiences by no less than David Bowie, who mounted a multi-media exhibition of Cahun’s work in 2007.

These days, Cahun’s photographs are in collections of major museums, including New York’s Museum of Modern Art.

So at this year’s Halloween festivities, when we dance and prance in our finest feathers and tangiest ties, when we slip in and out of genders as smoothly as we slip on a jacket or dress, let’s give a holiday cheer to master dress-up artist and courageous voice for freedom, Claude Cahun. ▼

Ann Aptaker is the author of short stories and the Lambda & Goldie award winning Cantor Gold series Murder and Gold. The latest in the series, Hunting Gold, was released in July 2022. Find Ann on Facebook at Ann Aptaker, Author, Twitter: @AnnAptaker, or Instagram: ann_aptaker.