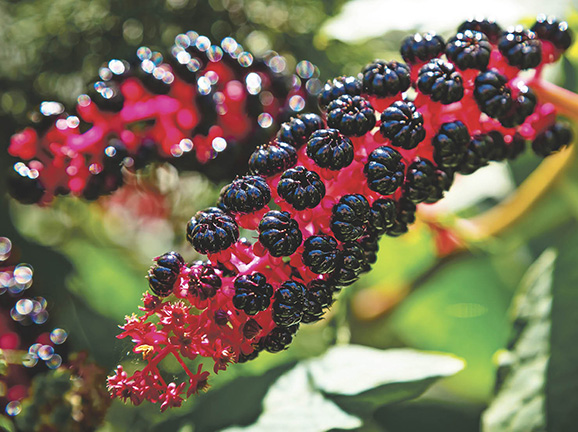 October is here and you know what that means…it’s the perfect month to learn your potions and poisons! The garden can be a wondrous place and enchanting as Oz, but it also plays host to a myriad of dangerous ingredients and bedeviling plants.

Some you may have heard about, like poison hemlock, also known as Conium maculatum. Poison hemlock looks very similar to Queen Anne’s Lace, and both have a white, carrot-like root. However, poison hemlock has hairless leafstalks, and smells musty when bruised. Take not because a small amount can cause paralysis and even death. Socrates is widely known to have died from hemlock poisoning.

A group of plants that are known to be poisonous to dogs (however, it’s dangerous for all mammals) is the dogbanes or Apocynum which translates to “away, dog.” Dogbanes have reddish stems and pairs of oval-shaped leaves. Their seedpods are slender and also come in pairs. The plant emits a milky juice that is also toxic. Dogbane can sometimes be confused with common milkweed, however young dogbane shoots are hairless.

With a name like nightshade, something is bound to go wrong for the person that takes it. Common nightshade, or Solanum nigrum, is a weed that has a five-petal flower with yellow, beaklike anthers. The leaves are triangular shape and have an irregular toothy edge. They produce black berries in clusters. The young, underripe green berries are the most toxic so beware. The group of nightshades also contain many types of our more common, edible plants like eggplant, tomatoes, bell peppers, and potato. The name is most likely derived from how the plants prefer to grow and flower at night.

The common buttercup, or Ranunculus acris, is yet another plant that can cause a nasty reaction, even though it’s a beautiful plant found in fields and meadows. The leaves are palm-shaped and the erect stem is hairy with glossy, overlapping petals. Buttercups contain varying amounts of a poison and will cause intestinal problems if eaten and sometimes will cause the skin to blister if handled.

A native plant to Delaware, the blue flag iris, or Iris versicolor, is one plant that you may be surprised to find out is poisonous. In fact, all parts of the plant are toxic. This iris resembles the typical garden varieties and has a bluish-purple flower. They are mostly found in wet and marshy areas. Sometimes the roots are confused with cattails or sweetflag, so make sure you know what you are looking at before handling.

Monkshood, called such for the helmet-like shape of the flower, is extremely poisonous. They are found in low-lying woods and damp sloped areas. The leaves are palm-shaped and resemble those of the buttercup. The flowers bloom from August through October, just in time for All Hollow’s Eve. Be extremely observant when handling monkshood; even a little morsel will cause extreme harm.

I think I’ll end with a common sight around disturbed areas within our region, pokeweed. Also known as Phytolacca americana, it is the common weed you see with glossy, purplish-black berries and reddish, thick stems. The young shoots or just the leafy tips can be boiled and pickled. However, the roots, seeds, mature stems, and leaves are all very poisonous. It would be wise to avoid this plant, especially if the shoots are already tinged with red. I guess pokeweed is both a trick and a treat.

On that note, have a wonderful autumn and a spooky Halloween! ▼