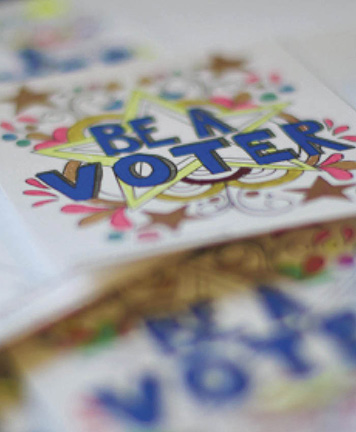 The Jury’s In: Your Voice Matters

I remember the first time I went. My mom was excited because I had come home from college for a few days so that we could go together. She’d done it for years, and finally she was ushering her youngest child into this right of passage. I was using my voice in a way that I couldn’t before. I had turned 18 just a couple months prior and was a newly-minted registered voter.

That was some years ago and while I cannot remember all the candidates and initiatives on the ballot, I do remember feeling like I was doing something important. I was showing up, and by way of my vote, adding my voice to the decision-making process of my local community.

As we approach Election Day 2022, we are all aware of the importance of the outcomes of races in our community and across the nation. The stakes are high. By way of the ballot, we share our opinions on how we treat our most vulnerable, how we approach public safety and justice, how we view privacy, how we educate our children, how we prepare for an uncertain future, and even how we protect and preserve our democracy.

As Americans, we all should have an informed opinion, via education or our valued lived experiences. As Americans we should all make sure that our opinions are respectfully expressed, and our voices are heard on election days—both primary and general. We may not always agree, and sometimes our preferred candidates will lose, or initiatives we support may fail, but we must stay engaged. Our voices matter and an engaged citizenry is key to building and maintaining the society we want to live in.

Beyond our elections process, there is another time when our opinion, perspective, and voice is very important. One that doesn’t get talked about nearly as much, and when it does get brought up, it’s not in the most favorable of tones. Jury duty. I’ve served on a jury twice for criminal trials. Each time I did it, I had the same feeling that I had when my mom and I went to the polls together for the first time. A feeling that I was doing something important that would impact others. Jury duty is not a chore, it is a privilege.

Recently, during a phone conversation with a friend, I learned that she’d been called for jury duty. She’d pushed back her date several times and now, she’d not been given another choice to push the date of her service back again. I probed her a bit about her reluctance to go. Initially, I thought she didn’t want to go because she’d miss days from work, but she told me that her employer would still be paying her for the days she was in court. I then thought it might be because she wouldn’t be easily able to get to the courthouse, but that wasn’t the case either because she told me that she could drive there, and several parking garages were nearby. Finally, she admitted that she didn’t want to go because she just found the whole idea of jury duty to be an inconvenience.

I cannot argue that leaving home extra early on election day so that you can make it to the polls before work or having to drop your kids off at school is always convenient. I cannot argue that sitting through voir dire for hours in chairs that may not be the most comfortable in a room with no television or spotty wi-fi is always convenient. However, I will contend that both voting and jury duty are worth it.

Our cities, states, and nation are better when we have participation and hear from a diversity of voices engaged in shaping policy and choosing our policymakers. Juries and their verdicts are made better when they have more diverse representation of age, race, religion, color, sex, ethnicity, and disability. Every vote counts in an election.

Similarly, every vote counts in a deliberation room where the influence of a nuanced voice with different life experiences can impact a verdict that could change the trajectory of someone’s life. From the ballot box to the jury box, embrace the power of your voice. ▼

Clarence J. Fluker is a public affairs and social impact strategist. Since 2008, he’s also been a contributing writer for Swerv, a lifestyle periodical celebrating African American LGBTQ+ culture and community. Follow him on Twitter: @CJFluker or Instagram:
@Mr_CJFluker.