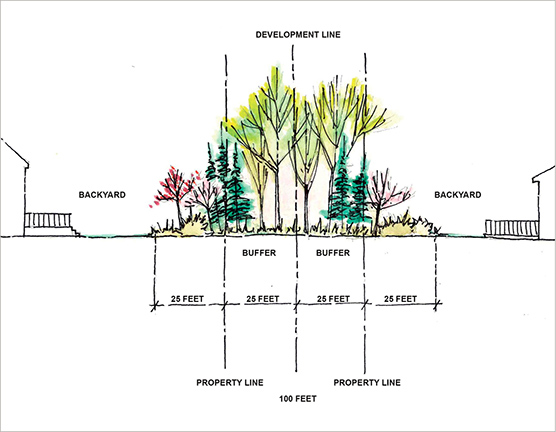 Eight months ago, I was supposed to give a presentation to the public on buffers as part of the Delaware Native Plant Society’s outreach mission. The pandemic had other plans.

Buffers have been trending now for a couple years, especially in fast-developing areas of our county. Buffers are in essence, transition zones between two distinct spaces. People most often associate them with either a protective area that surrounds a wetland or other water body, or a visual screen between neighbors. But do you know all the benefits a properly designed buffer can offer?

Since autumn is a perfect time for planting, let’s talk about buffers, why they are important, and how to build one in your own backyard.

In our local region, there are numerous types: forested buffers, wetland buffers, riparian buffers, coastal buffers, and roadside buffers. They provide numerous benefits in different ways, and each type of buffer has its own application.

In this article, I focus on forested buffers as they are the most likely to be utilized by the average homeowner. Forested buffers between properties are quite common, and mainly used to visually screen an undesirable view. However, I would like everyone to think more broadly and build a better buffer providing much more.

Layering the plantings from the ground plane up to the canopy not only creates a denser visual screen, it also provides a food source such as berries and nuts for numerous wildlife. It becomes a destination for pollinators and insects, which in turn attracts birds feeding their new families. In addition, the fruiting shrubs, such as arrowwood viburnum (Viburnum dentatum), help migratory species fuel-up for their long journey. This particular native species has been recognized as the most beneficial for migratory birds due to its protein and fat quantities.

We didn’t even get to the other benefits, such as erosion control, rainwater infiltration, ground cooling through shading, soil formation, carbon sequestering, habitat, the list goes on. But I would like to move on to building that buffer.

If you live in a community or relatively new neighborhood, you may already have a buffer between your community and the one adjacent to you. They can vary in width, and usually occur on both sides of the community line. If your backyard backs up to this buffer, consider planting it, and maybe convince the neighbor on the other side to do the same. So, if there is a 25-foot formal buffer on either side of the development line and you and your neighbor plant 25 feet of the backyards, then you’ve just created a 100-foot-wide buffer.

Now what to plant? Approach it in layers like you would a smaller perennial garden. Lower things in the front, medium things behind them, and taller things after that. The canopy trees such as oaks, maples, sycamores, and tulip poplars would be around the center of the overall buffer. Evergreen trees such as white pine, loblolly pine, cedars, and hollies are the midground plantings and offer the most visual screening. Pop in some smaller flowering trees like dogwood, redbud, or serviceberry. Then utilize small to medium shrubs in front of them like winterberry, witch hazel, inkberry, and viburnums. Finally, depending on how much sun your yard gets, choose herbaceous plants to fill in around the shrubs and the ground plane. Ferns, black-eyed Susans, butterfly weed, sneezeweed, or native grasses and sedges would do well here.

It always good to check your soil, too. Some may have a sandy, well-drained soil and others may have a more clay soil that remains moist at all times. Choose your plants appropriately.

I hope I made you think more outside the box on buffers. If everyone starts a piece in their own backyards, imagine what we can accomplish when the puzzle is finished.

Stay well and let’s garden together.

Eric W. Wahl is a landscape architect, artist, and President of the Delaware Native Plant Society.