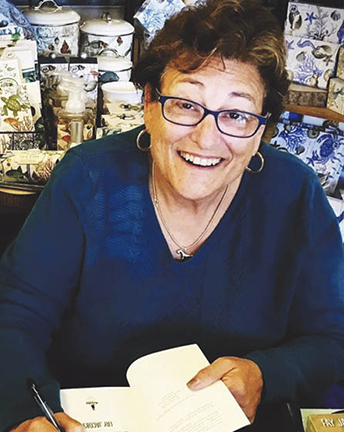 Fay will be on stage in the Elkins-Archibald Atrium at CAMP on September 23, with shows at 5:00 p.m. and 7:00 p.m. Tickets are $25 and can be purchased at camprehoboth.com.

Fay has toured in the US since 2015, updating her original show several times. But now it’s time for a whole new script, still hilarious and heartfelt, but a fresh look at our Rehoboth lives and her latest take on aging, gay rights, and dystopian current events.

At its core, the show highlights the author’s insistence that nothing is ever so horrible if it’s worth the story you can tell. The show has Fay’s signature humor and relatable stories for everyone about life, liberty, and the aging process.

“I broke into show biz at an age where I’d more likely break a hip,” Jacobs says, “so losing two years in my new “career” because of the COVID pandemic was significant. I mean life is like a roll of toilet paper. The closer you get to the end, the faster it goes.”

The new show is based in part on her writing for Letters from CAMP Rehoboth and her award-winning column in Delaware Beach Life. Among many venues, Fay has performed in Provincetown, Asheville, New Hope, New Orleans, and all over Florida.

She’s performed the show aboard an Olivia cruise and at the legendary Duplex Cabaret on Christopher Street in New York’s Greenwich Village. She’s gone international now, having just returned from a show in Ontario, Canada.

There is limited seating. Get your tickets now at camprehoboth.com! ▼

Registration is open for the summit, which will be held at Del-Tech Community College, in Georgetown, Delaware, on Saturday, October 15, from 11:00 a.m. to 3:30 p.m. The summit is a half-day gathering to connect and uplift members of Gender and Sexuality Alliances (GSAs), their advisors, and allies who support them as they fight for equity and justice. Register online at uwde.org/GSA. ▼

CAMP at Georgetown’s National Night Out

CAMP Rehoboth was among the 25 exhibitors participating in Georgetown, Delaware’s first National Night Out on August 3, at the historic Richard Allen School. The event drew a large crowd and featured demonstrations by first responders; lots of food; bookbag, school supply, and t-shirt give-aways; face painting; and quilt-making. ▼

Youth from the YouthUp program and their families recently enjoyed brunch at Port 251, taking in a drag show. For most, this was their first show ever!

YouthUp also had an end-of-summer party, visiting Funland for a day of rides and fun. The day wrapped up with a pizza party in CAMP’s courtyard. For many of the youth and their families, this was their first visit to CAMP Rehoboth. ▼

Shakespeare in the Atrium on October 21

Save the date! On October 21, the Delaware Shakespeare Community Tour will bring the premiere of its Spanish-English musical version of Twelfth Night, O Lo Que Quieras, to CAMP Rehoboth’s Elkins-Archibald Atrium. ▼