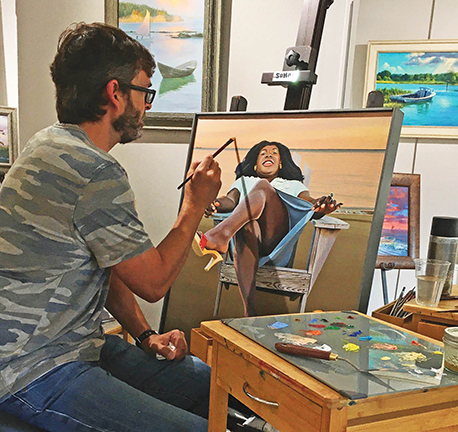 From Wendell’s Woes to Wendell…Whoa!

Spoiler alert: Wendell will grab you by the lapels and never let you go. Ask Brax Hudson.

Among the 50 stunning Hopper-esque Tom Wilsons unveiled at the opening at the Biggs this summer, a half dozen were lent by Peggy Raley Ward. Within the exhibition of those amazing bucolic scenes are countless classic cars, nine cows, four horses, a pig, a goat, and her late father, the legendary Sussex farmer, Bob Raley.

But there’s an apple among the oranges. A gender-fluid African American woman, happily perched in her Adirondack on the beach: Wendell.

A black trans woman. And farmer Bob bought it.

An arch conservative with Archie Bunker tendencies, Bob Raley was brought into the light of LGBTQ existence by his own daughter.

A bona fide farmer’s daughter, the misty-eyed Peggy and I toured the exhibition together. It’s her entire world painted by her dear friend, Tom Wilson. Dabbing her eyes with a tissue: “He should be here for this. He so deserved a curated museum show in his lifetime.”

So, we kept coming back to the portrait of Wendell. Peggy lost Tom to AIDS in 1995 and has tried valiantly to keep his amazing “love legacy” alive. His art was gob-smacking. But his capacity for love? Boundless.

He and his partner Leo befriended Wendell in the 80s when it was clearly bold to just be out—even as a white gay man. It was audacious to be transgender. And African American at that.

Wendell was the only piece needing a full makeover. The story goes that farmer Bob took Wendell out to his private Mills Island hunting lodge. Peggy teased him good-naturedly about “why Wendell?” given they own several of Wilson’s pastures and farmhouses. At the lodge, Wendell observed a lot of poker games and a few late-night raucous binges. 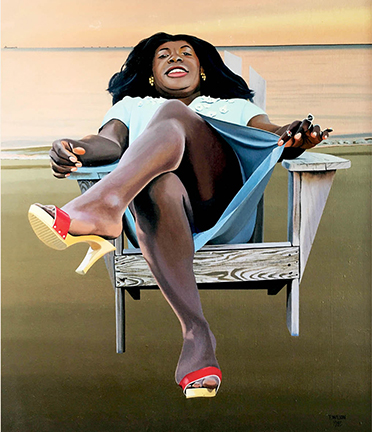 Peggy told Bob she wanted Wendell returned to her for her wedding in 2011. Farmer Bob put it on the next boat back to dry land. It got damaged. Badly. It’s safe to say that Sussex County farmers aren’t likely to use white curator gloves.

“He put the art in a black plastic bag and tossed it in his boat and the next thing you know, I have one of my favorite pieces needing a lot of restoration.” When the Biggs Museum curator reached out this past spring to procure Tom’s work, all of them—pigs, cows, cars, etc.—were ready for their museum closeup. Except Wendell.

“There was only one place to take her: Brax Hudson.”

The white picket fence around Abraxas Gallery in Lewes invites one back to the lower slower nature of the bramble and brine. The idyllic Americana setting seems unchanged from the 50s. Hudson is a hometown artist, born and bred with a literal picket fence.

Yet Brax was immediately swept up in Peggy’s fervor. Peggy had to get Wendell ready for a museum opening and Brax was the answer.

Says Brax, “My patrons and visitors would stop dead in their tracks when they saw this black trans woman on my easel. I was just honored, and a bit hesitant to touch Tom’s amazing brush strokes.” Our straight-but-not-narrow ally was honored to work on Tom’s original painting.

“It was [Peggy’s] sacred piece. Who could she trust to paint it? I got chills. Now I have the legacy piece. Tom has been gone for 27 years and now the pressure is on timewise. It takes me months to paint from scratch, but this was on a week deadline.” Lump, meet throat.

Hesitant to touch up the master’s work, Brax was reassured by Peggy: “You’re an amazing artist and Tom would have taken you under his wing and introduced you to everyone he knew. He wasn’t a zero-sum guy.” That nails Tom Wilson’s legacy right there.

Brax got to work. “I teach my students that every stroke is intentional. I teach them to ignore the object and focus solely on light, shadow, proportion, and texture. Now, ignoring a ‘tranny on the beach’ is not easy! But I settled in and since I paint like Tom, I could intentionally use each brush stroke. It’s the blending that’s so crucial. You can’t just use any color.”

There’s a rich history of diversity in the farmlands and beaches of LSD. Same-sex couples began descending on sleepy Sussex County in the 70s. Some locals weren’t quite ready for the city slickers daring to hold hands in public and dance the night away at the disco. One could spend a lifetime trying to explain to the haters how lonesome and isolated we were as youth, and why we desperately needed a community.

Enter our dynamic duo of “Steve and Murray”—synonymous with Creating A More Positive Rehoboth. Peggy is a huge fan. “Murray and Steve were the warriors who stopped the bullying and hate on the streets. They deserve every bit of credit for that.”

But the “prequel” to CAMP was always here, just below the surface. It was in Bob Raley’s corn fields where humanity seeped in, even if negative forces tried to drown us out.

“Dad would get teased by his farmer pals for having gay friends and he’d say ‘oh yeah, well look how they improved our village with their restoration. You should work on your own house. We could use more of my friends!’”

This is where love and bravery come in.

Love in the shape of Tom and Leo taking Wendell under their wings.

Bravery in Wendell being herself.

Love in the shape of a farmer Bob taking the portrait of Wendell to his island.

Bravery in showing support for his daughter’s Bohemian, non-traditional friends.

Love in the shape of straight Brax touching up gay Tom’s brush strokes.

Brax is philosophical about it. “It’s such a small world. I grew up idolizing my father’s good friend. He was the macho ‘dude of dudes.’ Well, he transitioned later in life and it was eye-opening to say the least. We are all just players on a stage. All are welcome.”

Tackling this project 27 years after Tom passed away created a wistfulness. Brax had one final thought: “I wonder who will conserve my own work when the time comes?” It’s likely that the conservator is in kindergarten today.

In a world that’s banning books and shutting down Gay Straight Alliances in schools, Wendell can lead us to the light of progress. Standing directly in front of restored glam Wendell, you can lean to your right and see the State House where nationally renowned transgender Senator Sarah McBride was sworn in. Ceiling shattered.

Certainly, Wendell watched from above. And Bob Raley popped her popcorn.

Wendell and 49 other pieces are on exhibit through October 16. Stop in at CAMP for your guest pass. ▼

Brent Adams Mundt is a freelance writer who lives in Rehoboth and New Orleans. Once a terrified and bullied kid, he’s now focused on scholarships for LGBT students through PFLAG New Orleans, his hometown. a/k/a Roux Paul on FB and reachable at mundtbrent@gmail.com.