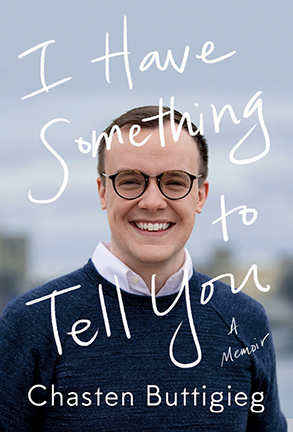 A Talk with Chasten Buttigieg, Author

I recently spent a delightful half hour speaking with Chasten Buttigieg, husband of former presidential candidate Pete Buttigieg, writer and social media star in his own right.

Chasten has just released a fascinating and honest memoir titled I Have Something to Tell You about his life growing up and his experience campaigning to be First Gentleman. Chasten will be here in Rehoboth, albeit virtually, on October 6 at 5 p.m. for a Zoom chat about his book with the folks at Browseabout. I’m set to moderate the event, and based on this conversation, it’s going to be great fun.

Chasten: I love that I’m back talking to people. The sad part is I’m stuck in the kitchen on the phone. But it’s so great connecting with people about the book and about what’s going on in this country right now.

Letters: Okay, let’s dive in. What was your first thought when Peter (as you refer to your spouse) first told you he was thinking of running for president?

Chasten: I answered with kind of a joking, ‘sure, go for it.’ I’ve always supported him in everything, and I knew that he had a terrific way of connecting with people. But I had no idea what it really meant. It’s exhausting. Four to five states in one day, airport food, going 100 miles an hour every day, sleeping in different hotels, getting up 4 a.m., it was pretty grueling. Constant motion. But the people we met were the best. We believed we were getting an important message out, and it was exciting and exhausting.

Letters: What are you and Peter doing now for the election?

Chasten: I’m continuing to use all my platforms, and that’s why it’s important to have conversations with our families and friends, and people in our lives, talking to people about how political decisions affect our lives, marriages, families, schools. We all know somebody ready to vote for this president again. We all do. We need to talk with them, explain our understanding of the results of political policy on our lives. And it can’t just be talking at people on social media, we need to talk with them.

Letters: Did you go with Pete to the recent Biden fundraiser with Cher?

Chasten: (Laughing) Well I saw it on Peter’s schedule, and we were happy about it, but unfortunately, I watched it from afar. He wrote his own joke by the way. Very proud of him. (editor’s note: Pete, introducing Cher, said “I am the only thing between hundreds of LGBT+ activists…and Cher.”)

Letters: Does your experience of initially being rejected by your parents after coming out, then experiencing a short period of homelessness, help you offer advice to young LGBTQ people?

Chasten: Well, to clarify, my parents never said get out of the house. That was me. I was convinced something in me was twisted, and I just ran. It took me time to come to terms with coming out myself. But my parents adore Peter. Maybe a little bit more than me. And they walk in Pride parades and have taken on an identity of their own for allyship. They are great.

Now, many years later, some kids at LGBTQ centers come with their parents and I share my experiences and the story about my parents.

Letters: Given your high school where zero queer people were out, what are your thoughts about today’s kids, coming out younger and more able to express gender identities?

Chasten: Isn’t that such a beautiful thing to see? During the campaign, I was so heartened when I sat down with these kids who were not only comfortable in their own identity but showing up for other kids. They are volunteers and give support. And for some kids they are the only family they have. I didn’t have that as a kid. It was so inspiring to meet with these young people and see how different things are today.

Letters: Can you tell me about some favorite folks you met campaigning?

Chasten: Too many to mention all! There was Bridget from Iowa, a young girl with autism who essentially came out to us about being autistic. She told us she was proud of who she was. And she campaigned with us. Then there was the New Hampshire family, where one of kids was struggling with a homophobic school administration. After our first stop talking with them, we saw them at every stop in the state and had some great conversations. They began knocking on doors canvassing for my husband. Then there was Kathy who kept bringing me apples…there are just so many….

Letters: I love your Fish Camp stories about being somewhat of an outdoorsman and practiced marksman. It’s a non-typical background for many gay men. How did that experience help you in the campaign?

Chasten: My dad raised me in a gun-sensible household. I learned about gun safety and we were very respectful. When I met voters who were confused about 2nd amendment issues, I could talk to them. And then continue talking about believing in kitchen table politics, how certain political decisions affect our lives and what happens to us. I could express how politics shaped my family and life. That helped other people think about some complex issues. And convinced some to come out and caucus for us.

Chasten: I remember sitting in my hospital bed thinking this is it, it’s over. I will never be able to pay this bill. It will be crushing. It was a very scary moment—when you know you need care and can’t afford it. Many people are in the same position now as I was then. And the comparison could not be more stark right now. You have a candidate who wants to make health insurance available to more people and a candidate who wants to gut the Affordable Care Act. And yes, in this country we need to move in the direction of Medicare for all.

Letters: Do you have a more relaxed lifestyle these days?

Chasten: Absolutely. Peter and I spend a lot of time together, kayaking, cooking, biking, walking the dogs. It’s still a little hard to come down from that pace. I’m finding it difficult to read for longer than 30 minutes, and I keep thinking “what should I be doing—writing, posting on social media?” And we’re both imagining what life would have been like if he had gotten the nomination. We gave up a lot to run, and well, it’s great to have him back!

Letters: Tell us about the dogs.

Chasten: Buddy is a rescue Puggle (Pug/Beagle). I think he came from an unhealthy home; he’s always looking for food. Last night he got into the trash so I’m watching him. And Truman is a lab/beagle rescue. He’s a goofball. It took a lot of training to get him to let us even pet him, but he’s great now. He was named for President Harry Truman who said, “If you want a friend in Washington, get a dog.”

Letters: How do you envision the COVID-19 pandemic playing out?

Chasten: It’s going to take the restoration of leadership in DC to recover from this. It’s going to take people who believe in science and the health and safety of Americans. This president does not. Every single day thousands of people are in anguish because of the pandemic and because of this president. All of those things we care about go out the window if we re-elect somebody who doesn’t care.

Letters: What’s your hope for the future?

Chasten: We built the campaign about a sense of belonging. People have been losing trust in one another and institutions. We must re-build an America where all people feel they belong. And that takes more than just politicians. We can’t legislate belonging. The thing we can do, among other actions, is to invest in arts and education. Life turned around for me with teachers who believed in me. We must all work to build a sense of belonging for everyone. I want to see people be less fearful of each other, more loving. It’s my hope.

Letters: I enjoyed this conversation and look forward to moderating your virtual book event with Browseabout on October 6. All the best to you and Mayor Pete. And good luck with the book “tour.” I wish you could be here in person.

Chasten: Thanks, I wish we could visit Rehoboth too. We’ve heard a lot of good things about it. Talk to you October 6.##