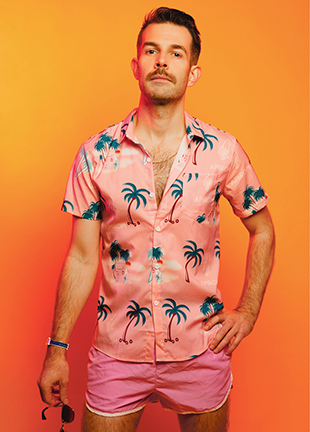 A Bright Light in the Dark

The name Rod Thomas might not be instantly recognizable, but it’s likely you’ve come across the one he uses on stage. As Bright Light Bright Light, Thomas has been a staple of the international LGBTQ music scene for the last 10 years, performing for Cher, and collaborating on a song with Elton John.

I read that the title (Fun City) was inspired by a comment made by former NYC mayor John V. Lindsay on his first day in office in 1966, amidst a crippling transit strike. Is that right?

Yeah, it was. Basically, when he took over on his first day of office the whole city fell to shit and it was a disaster. There was a transit strike and the lights went out and everyone just lost their minds and one of his adversaries was like, “Oh, so you’re still happy to be the mayor?” And he was like, “I still think it’s a fun city.”

So, I kind of took the idea of this very flawed paradise and applied that to how queer people have had to live the whole time. It’s like, you move to LA, New York, Atlanta, whatever is your city, to escape the suburbia you’re not safe in. But then you get to the city, which has things like other gay people, nightlife, sex, glamour, jobs. It has everything. But you also have the prejudice and the danger and the need to keep both eyes open all the time whilst remembering to celebrate yourself and have fun. So Fun City, for me, is like this place that you aspire to live in. But it’s also a double-edged sword because it could be your downfall.

Did you personally experience this?

Yeah. Where I grew up is absolutely not tolerant of gay people. I grew up in the middle of nowhere, in like an old coal mining valley in South Wales, which was homophobic. So, for me, it was going to London and then moving from London to New York; it’s like chasing the best version of yourself and finding a place that allows you to be the best version of yourself with the people you want to be surrounded by.

Your song with Justin Vivian Bond, “Saying Goodbye Is Exhausting,” is really touching. What can you say about that song?

I feel like a big part of gay life is losing people too young, and that’s about a friend. I don’t often write that kind of lyric about personal loss, but that is about a friend who died two years ago and was 33, 34 years old. Throughout time people have been murdered by homophobes, but also with the AIDS crisis and everything that LGBTQ+ people have gone through, it has been watching their contemporaries or their friends or their family die too young.

Even during the last three weeks we’ve seen Black person after Black person murdered, trans woman after trans woman murdered. Saying goodbye and watching these people disappear is absolutely exhausting when people have the power to stop it and literally nobody that it doesn’t affect gives a fuck, and it’s just unforgivable. I don’t understand where the compassion in society has gone. Even if you were the shittiest white person living, how do you not understand that watching person after person die is exhausting?

Has disco and dance music been a catharsis for you?

Dance, yeah. The whole ethos of disco from my understanding is: dancing through pain, or singing through turmoil, or celebrating through adversity. So, referencing that in relation to what I wanted to talk about with the record felt kind of right to me. A lot of gay culture was born and bred from the love of disco music, and the joy and togetherness it inspired is still very much at the heart of LGBTQ+ culture.##