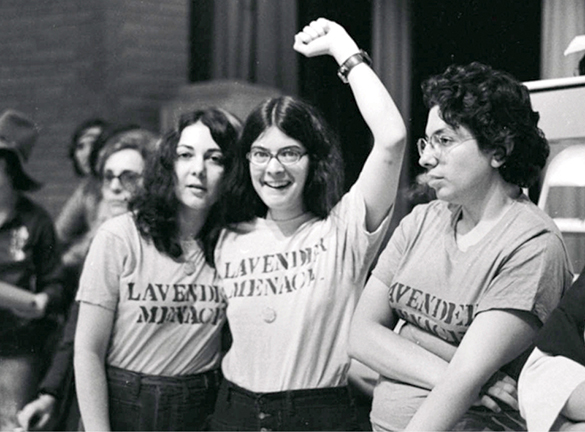 The cursed plague we’re all trying to live through has forced cancellations of parties, festivities, events large and small. Most gatherings can be only virtual. Through our Zoom meetings and cocktail hours, our online laugh fests with pals and family, we make the best of it. When our laptop or phone camera carries our image, we can at least take comfort in knowing that those receiving it are happy to see us, and we them. It can’t compare to a hug but it’s better than nothing. It fortifies our need to belong.

But what if we’re not invited to the party? What if our friends, colleagues, even family, don’t want to hear our voices, see our lives? Don’t want us to belong?

In November 1969, lesbians were initially unwelcome in what was at the time the most politically and culturally influential gathering of the late 20th century feminist movement—the First Congress to Unite Women.

Lesbians were also unwelcome in the most powerful organization fighting for women’s rights at that time, the National Organization of Women (NOW). At that First Congress in 1969, Betty Friedan, president of NOW and author of the breakthrough book, The Feminist Mystique, called the presence of lesbians and our civil rights issues a “lavender menace,” effectively exiling lesbians from the larger women’s movement.

She believed the lesbian presence would taint NOW and the feminist cause. She even went so far as to successfully have the Daughters of Bilitis, the pioneer lesbian rights organization, dropped from the list of sponsors of the Congress.

What Friedan and her followers failed to understand is that lesbians are not wimps.

Instead of sitting down quietly or skulking away, a group of lesbians, among them Karla Jay, Ellen Shumsky, Barbara Love, Rita May Brown, and others, made trouble and made noise. Brown even resigned her staff position at NOW in protest. The rebels took ownership of Friedan’s intended insult and formed the radical group the Lavender Menace.

At the Second Congress to Unite Women in 1970, sponsored by NOW, which still regarded lesbians as a taint to the feminist movement, 40 members of the Lavender Menace stormed the stage where a boilerplate panel was in progress. Carrying signs advocating lesbian rights, and despite the Congress officials’ attempts to reclaim the stage, the Lavender Menace group turned the program into a discussion of lesbian rights and lesbian legitimacy as women and feminists. Other group members handed out their manifesto, The Woman Identified Woman, to the audience.

The rebellion proved effective, and the women of the Lavender Menace kept the pressure on mainstream feminism, resulting in NOW eventually adopting lesbian rights policies. Betty Friedan even apologized, in 1977, for her earlier insult to lesbians and became a supporter of a resolution condemning discrimination toward lesbian sexuality.

Though lesbians were gaining acceptance into the mainstream feminist movement, that acceptance was still often reluctant. Same-sex relationships remained illegal in much of America, and mainstream feminists were leery of association with sexual outlaws. Moreover, organizations like NOW, whose members were overwhelmingly white and middle-class women benefiting from secure financial positions and traditional jobs, didn’t really understand or try to represent the cultural and financial struggles of lesbian life.

Members of the Lavender Menace, tired of fighting the chill from mainstream feminism, eventually broke off from that effort and adopted an even more radical profile, even changing their name, first to Lesbian Liberation and then to Radicalesbians. But their advocacy of complete separation from both the patriarchy and the more general effort for LGBTQ rights—which they felt was tilted in favor of gay men—led to dissension within the ranks, and the group eventually disbanded.

Nonetheless, the Lavender Menace is an important part of women’s history. Their refusal to be uninvited to the party forced a reckoning by mainstream feminism to recognize lesbians as integral contributors to the overall struggle for women’s rights.

So, while we muddle through the loss of festivals, conferences, parties, and political events, we can look ahead and know they’ll sooner or later come around again. And this time, we’ll make sure we’re all invited.