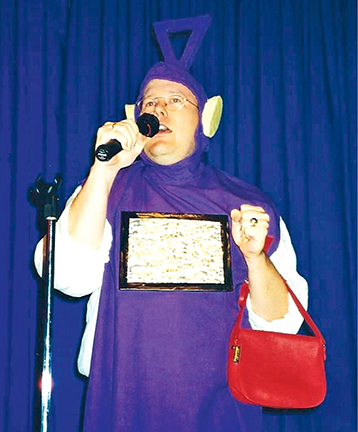 Not So Butch and the Sundance Kid

I had only been associated with CAMP Rehoboth for a few years, and it would be several more before I proudly joined the Founder’s Circle. But it wasn’t my first Sundance.

I stood in the wings, microphone in hand. The silent auction had concluded, and the live auction would begin in 10 minutes. To entice an audience away from the tables and closer to the stage, I’d been asked to sing a show tune while scores of volunteers worked furiously to clear the merchandise and snap up all the bid sheets.

“Ladies and gentlemen, the silent auction is now over,” a voice rang out, and the crowd reacted, some wondering if they’d won any of the items they’d been coveting. “The live auction will begin shortly.”

Predictably, many people headed to the restroom or the open bar for another G&T, but it was my job to convince at least some of them to step a little closer to the stage. I adjusted my headdress and my giant red purse, waiting to be announced.

“Ladies and gentlemen, Sundance is pleased to announce a very special guest this evening. Someone you’ve all heard of, a veritable icon of gay pride.”

For a split second, I wondered if I’d been replaced. I knew a lot of folks in the room, but not all. I wasn’t famous, or an icon of anything. Had there been a mirror backstage, I’d have understood the joke. I was wearing a purple hood, with a big triangle perched on top, and a purple tunic with a television screen duct-taped to my chest. Dangling from my right arm was my mother’s giant red purse.

In case they slipped your mind or were forcefully repressed, the Teletubbies were rising stars of children’s television in the late 90s. No one who could form complete sentences could stand to watch them for more than five minutes, but somehow, they kept the pre-verbal set enthralled.

The Teletubbies weren’t without controversy—mostly the largest, purpliest Teletubby. You see, years before his son would disgrace himself with the aid of a winsome pool boy, Jerry Falwell Sr. warned good Christian parents everywhere that Tinky Winky—he even sounded gay—was a tool of Satan sent to earth to turn your unsuspecting toddler into a raging homosexual.

I emerged from my spot in the wings. Even though the Teletubbies famously waddled enthusiastically, spouting high-pitched gibberish, I thought it would be funnier if I took a deadpan approach, simply walking to my mark and standing there, letting the crowd take in the ridiculous costume and controversial character. People surely laughed.

And then I heard the music—the opening chords to the gayest Act One closer ever composed. I raised the microphone to my lips and sang, rather quietly, “I…Am…What I Am. I am my own…special…creation.”

The crowd went nuts. It was important for me to sing the song as seriously as possible. “Let the audience laugh,” my director would always tell me. So, I adopted a sad, plaintive expression, but inside, I was giddy.

“So…come…take a look. Give me the hook, or the ovaaaaaaation.”

The laughter at the front of the house did its job. People throughout the hall sensed something was happening near the stage; something they had to see.

As the song gained intensity, I became louder and only slightly more animated. I looked like Tinky Winky on the outside, but inside I was Albin, the wounded but defiant drag queen from Jerry Herman’s La Cage Aux Folles, full of rage and sorrow, and yes, pride.

In rehearsal, director Fay Jacobs and I hadn’t changed a single lyric, except at the song’s end. Near the triumphant crescendo, I crooned, “It’s myyyy life! Even though I’m just a Teletubby. No wife, but I’m lookin’ for a tele-hubby.”

I finished to wild applause. And sure, they were applauding for me, but more so for us—for being the kind of people who respond to idiots who wish to oppress us by celebrating ourselves that much more. My deadpan expression broke, and I laughed along with everyone else. Rarely in my life have I felt such joy.

Eric Peterson is a writer and teacher. He co-hosts a podcast about old movies—visit rewindpod.com to learn more.