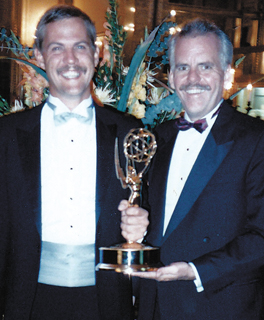 Every industry has its pioneers, and today’s big business of TV cooking shows is no exception. Long before the smiling faces of Rachael Ray and Emeril Lagasse were lighting up our prime-time TV screens, writers and producers were already beaming culinary “how to” shows into our living rooms. Award-winning TV producer and Rehoboth Beach resident John Potthast is one of those pioneers. His groundbreaking work undoubtedly helped pave the way for TV chefs yet to come.

As with so many success stories, John’s original goals never included cooking shows, especially with such luminaries as Julia Child and Martha Stewart. Still, John’s talents had always leaned toward the visual, and his love for art grew through high school and into college. The requirements for his degree at the University of Maryland included a course in theater that culminated in a one-of-a-kind Master’s thesis: A full production of Tennessee Williams’ A Streetcar Named Desire. John wielded total control over the project, and the resulting performance was met with rave reviews. In June, 1973 Potthast was awarded his MA in Theater, but good fortune wasn’t quite finished with John. While celebrating at the old Pier 9 in Washington, D.C., he met Jay Chalmers, now his partner of 37 years. At the time, John was in the middle of designing costumes for dinner theaters, and he says that the “fabric, trims, feathers and sequins were everywhere in my apartment. Jay thought for sure that he’d gone home with a drag queen!”

John immersed himself in live productions, both local and national, eventually landing a job at Maryland Public Television. Leaving behind a trail of feathers and sequins, he climbed the corporate ladder from researcher to script writer to associate producer, becoming instrumental in the making of MPT’s popular On Stage at Wolf Trap television series. John earned the title of producer and, in 1986, found himself face-to-face with the monumental task of producing a two-and-a-half hour PBS television special—none other than the now-historic Wolf Trap Presents The Kirov: Swan Lake. The technical challenges involved in bringing this world-renowned Russian ballet company into millions of living rooms earned first-year producer John Potthast a coveted Emmy Award for Outstanding Classical Program in the Performing Arts.

Back then, Potthast produced many of his shows in “travelogue” format because he felt that he needed to “have the chefs talking, and I wanted…to get out of the kitchen, expand the travel component a little more.” Nowadays it’s not unusual to watch celebrity chefs visiting five states in one 30-minute episode, or driving a red vintage Camaro around to various diners, drive-ins, and…(you get the idea). Many of John’s innovations have become standard procedure in the industry. For example, it was his idea for TV chefs to perform in casual attire, without their intimidating white coats. He was also instrumental in allowing certain chefs to film segments in their personal kitchens—not the least of which, Julia Child herself.

John quickly advanced to the role of executive producer, and in 1999 became Vice President of Productions at MPT. After 25 years of service (and many tasty meals, I’m sure), John retired in 2003. It lasted two days. Potthast moved seamlessly to WETA-TV (a major producing station for PBS) as project executive for shows such as Martha Stewart’s Everyday Food; still on the air today. John left WETA in the fall of 2006, but continues to consult for the Public Television series, Wild Animal Baby Explorers (combining high-tech animation and live HD footage). He is also producing the third season of Primal Grill with noted grillmaster and author Steven Raichlen. Both will air in the coming months.

The multi million-dollar cooking show industry owes much to pioneers like Rehoboth Beach resident John Potthast. There were few rules to follow in those pioneering days, and he was creative enough to make them up as he went. So the next time you hear Emeril say “Bam!”, or you see Martha Stewart smiling benignly from behind a wire whisk, think of the people like John who helped to start it all.