Since rolling out the high-camp glam on their six-year-old debut, Scissor Sisters have been irresistibly cheeky. Seriously —check out that clenched ass close-up on the cover of the New York foursome’s disco-new wave third album, their ebullient follow-up to 2006’s Ta-Dah. It’s set in motion with the robo-strobing total club cut “Night Work,” a positive ode to...prostitution? Who knows, but it doesn’t really matter since it’s a hoot-and-a-half—drenched in frontman Jake Shears’ falsetto and electric guitar doodles. The party keeps hoppin’ with the flirty, psychedelic punch of “Whole New Way,” dropping smutty innuendo about rubbers and “big surprises,” and “Any Which Way,” a sharp, siren-started partier with some menacing laughs, shrieks and a frisky spoken-word bit from groupie Ana Matronic. Elsewhere, they go for big, uplifting ballad-turned-dance anthem on “Fire with Fire,” perhaps the most mainstream they’ve ever sounded; give Sir Ian McKellen a spot on the dark, atmospheric lead single, “Invisible Light,” and offer a homicidal sequel to their last LP’s “I Can’t Decide” with the thrusting second-best “Sex and Violence.” Elton John, Erasure and maybe even Cyndi Lauper (hey, aren’t those her trademark hoots on “Skin Tight”?) sound like main players on this slutty throwback project, but actually, if Scissor Sisters become as big as they deserve to be with this, a career best, co-producer Stuart Price is the man to thank. And, yeah, maybe that ass. Grade: B+ 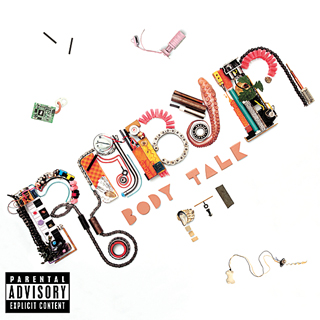 No one lately does down-in-the-dumps dance better than Robyn—the Swedish “Show Me Love” singer who beat the one-hit-wonder odds with her finest work, 2005’s self-titled synth-pop CD. And now comes “Dancing On My Own,” the introductory single—a dynamic disco downer that’s powerful and devastating and one of the year’s best—from the first chapter in this three-part Body Talk series. The song’s so revolutionary—such a smart piece of sad dance-pop that unites rejection and self-love—that it rivals her wonderful “With Every Heartbeat.” Cued from cuts on its predecessor, this tease of a disc—at only eight tracks—would’ve fit snuggly on her comeback LP: she spits some slick verses over the electro squiggles of the inescapable “Fembot”; monotonously intones word repetitions over a booming bassline on “Don’t F***ing Tell Me What to Do”; and, with the ska-flavored “Dancehall Queen,” gets fantastically funky. Robyn’s no binary machine, though. Her feelings are all human: the hooky pop pleasure “Cry When You Get Older” is a wise-up anthem and “Hang With Me” is a lonely, heart-on-sleeve lament. Piano, swelling strings and lots of vulnerability—the latter makes Robyn’s heart talk as loud as her body. How can you not show her love? Grade: B+

Her “Milkshake” brought all the boys to the club, and now all these R&B-free jams should do the same. But even though there are razzmatazz beats booming and bopping with their techno tone, there’s only so much Chicken Soup for the Dance Soul a person can handle—songs “Brave” and “Emancipate” pretty much say it all. Many of the nine though, especially the Madge-made “4th of July (Fireworks),” are undeniably hooky without trying to be the next big thing.

Just as they hit the road again, the duo releases their second live album—a deluxe 31-song set that gleans from several recent years on the road. Many ditties are culled from the last decade, but they don’t ditch fan faves like “Closer to Fine,” given a new spin with some guest vocals. They even throw in a wonderful reading of the Rolling Stones’ “Wild Horses” to close out the collection. As cool as they come, the Indigo Girls live is just how they were meant to be heard.

The out Bloc Party frontman—all made over into a manly muscle beast—goes easy on the band’s moodiness, leaning toward a more motivational sound on his solo CD. That’s the spirit of “Walk Tall,” the boot-camp chant starter that riffs off a saw-sounding drone. Some seem too much like electro-pop 2.0, but taking risks rewards him on “Everything You Wanted,” the album’s most immediate moment, and the lifting “Yesterday’s Gone.” If Kele is moving on as rumor has it, this is a pretty solid start.