Letters Travels to the Imperial Palace

While visiting the Royal Palace in Japan, John McLaughlin took time to catch up on happenings in Rehoboth Beach with a copy of Letters from CAMP Rehoboth. Take Letters on your next vacation. 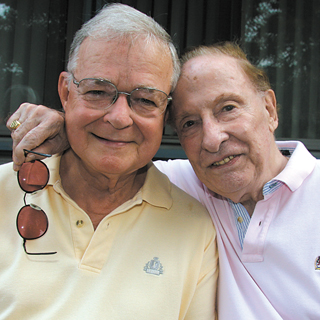 52 Years Together and Still Counting!

Ken Watkins and Bill Cooley recently celebrated their 52nd anniversary. Coincidentally, they share the same birth day and birth year. You can see more photos in the  CAMPshots photo galleries.

After weeks of competition at the Blue Moon in Rehoboth Beach, Karla Jones took home the check for $1,000 and the title of Rehoboth Idol.

Joe Gauthreaux Keeps Love in the Mix—July 4 in RB

DJ superstar Joe Gauthreauz is on a roll—eight days, four cities, and four gigs —and Rehoboth’s got him on July 4.  Between NYC and Provincetown, Joe’s Rehoboth debut at Love 2010 is sure to be a winner. Follow him on Facebook, and find out how this holiday he’s keeping the East Coast dancing.

Volunteers Work Behind the Greens

Volunteers are usually behind the scenes, but last week, they were behind the greens at the CAMP Rehoboth Golf Classic at the Marsh Island Golf Club. While the 68 golfers attacked the course, the volunteers from MCC Rehoboth, West Side New Beginnings, and CAMP Rehoboth set to work making sure the lunch tables were set, and auction items were on display.

He’s back! Christopher Peterson is proud to present, by popular demand, this year’s version of Eyecons—Hooray for Hollywood. Enjoy five new show stopping production numbers with Christopher and the Eyecons dancers plus some of your favorites from last year and days gone by. This year marks the return of Reba McEntire, Barbra Streisand, and Bette Davis joining Marilyn Monroe, Carol Channing, Julie Andrews, Bette Midler, Liza, Cher, Tina and Judy from last year’s hit show. For those not in the know, Christopher brings the characters to life both visually and vocally (No lip-sync here folks). Bedazzling costumes, clever choreography, soaring vocals and witty banter make for an evening the whole family can enjoy (well…the Addams Family).

In a first for Eyecons, Christopher opens the show as himself (or should we say a beautiful glamorous female version of himself).
Show opens July 3 and 5 and runs weekends until Labor Day at The Rehoboth Beach Theatre of The Arts 20 Baltimore Ave, cocktails at 8 p.m. and show at 9 p.m. For tickets call 227-9310 or go online to rehoboth-beach-theatre.com. Dinner and show packages available with the Atlantic Sands Seafood Grill on the boardwalk or Jam Bistro located under the theatre.

You are invited to a book party on Sunday, July 18 from 4-6 p.m. at the CAMP Rehoboth Community Center. Local author and business owner, Cassandra Toroian, will be signing copies of her new book, “Don’t Buy the Bull,” published by Sterling and Ross.

Founder of Bell Rock Capital, LLC, Cassandra has appeared on CNBC, Fox Business, and CNN numerous times as an investment expert. Her current book helps average investors understand how the world has changed and how these changes affect their financial life path.

“The foundations of many economic and financial theories have been proven wrong in the last few years,” says Cassandra. “I wrote this book because I was tired of seeing everyday Americans lose their shirts, and sometimes their homes, all because they were listening to old myths and outdated advice of so-called ‘personal finance gurus.’”

The CAMP Rehoboth Community Center is located at 37 Baltimore Avenue in Rehoboth Beach.

Brian Cheney, tenor, will be performing a benefit concert with Teresa Eickel, soprano, and Catherine Venable, piano, on August 7, 2010, 7:30 p.m. at Epworth United Methodist Church in Rehoboth Beach.
The concert is titled, From Music Man to Madame Butterfly, and the program will include an entertaining selection of solos and duets from popular shows including Music Man, Chicago, Carousel, The Desert Song, Elixir of Love, Madame Butterfly, and more. Something for everyone!

Proceeds from the concert will benefit P.E.O. International, a philanthropic educational organization where women celebrate the advancement of women.