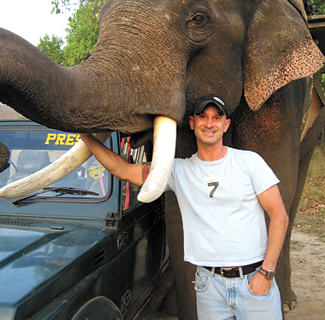 Every now and then, a successful career can arise from otherwise bizarre behavior. Like stalking, for example. Psychology student Mick Kaczorowski, awestruck by the presence of legendary film director Robert Altman in his small college town, relentlessly pursued and—quite literally—stalked the filmmaker.

Twenty-eight years later, Rehoboth Beach resident and award-winning TV producer Kaczorowski happily admits to ignoring his studies, waiting tables in any restaurant frequented by Altman, and doggedly trailing his idol until he was finally hired as a lowly note-taker. For Mick, it was a dream come true: He had been noticed by the larger-than-life Altman, renowned for films such as MASH, Nashville, Popeye, and Secret Honor, to name just a few. Not one to miss this once-in-a-lifetime opportunity, Mick learned the film industry “on the job” as one of Robert Altman’s production assistants, eventually serving in various capacities in the editing phase of Streamers, OC and Stiggs, and Secret Honor.

In 1985, Kaczorowski was tapped to assist in the launching of National Geographic Explorer. Over the following eight years, he edited almost 50 films, spawning two Emmy nominations for Best Achievement in Editing. By this time, Mick was doing a lot more than just editing. For the IMAX production of Wildfire: Feel the Heat, he trained to become a certified firefighter, filming on the front lines of forest fires in both the U.S. and Australia. None the worse for wear (except maybe for scorched eyebrows) he went on to translate the aerial firefighting adventure into a motion simulator ride; writing, producing and directing the project for Discovery’s Themed Entertainment Division.

As Senior Executive Producer for Discovery Pictures, Mick Kaczorowski won his first Emmy Award (Outstanding Informational Programming) for Carrier: Fortress at Sea. He then proceeded to scoop up two more Primetime Emmys (Best Animated Program) for Walking with Prehistoric Beasts, and Allosaurus: a Walking with Dinosaurs Special. For you techies out there, Mick also holds the distinction of being one of the first editors to work entirely on AVID, the then-groundbreaking digital production and editing system. The resulting feature, In the Company of Whales, was also the first AVID-based production for Discovery, winning numerous awards for TV and video, ecology and environment.

As Senior Executive Producer for Animal Planet in 2004, Mick left behind the hefty whales and dinosaurs (at least for a while) in favor of those perky little meerkats; scurrying their way through the nooks and crannies of the Kalahari Desert in South Africa. The wildly popular Meerkat Manor helped bring Discovery’s Animal Planet into more homes than ever before. After all, who could resist those adorable creatures as they’re being carried off by hawks and devoured by snakes—all the while furtively “hooking up” amongst the tumbleweeds?

Kaczorowski was also Executive Producer for the feature film Meerkat Manor: Queen of the Kalahari, The Making of Meerkat Manor, and The Science of Meerkat Manor. In 2005, he snapped up two more Primetime Emmy nominations (music and cinematography) for Buggin’ with Ruud; Animal Planet’s original series starring New Zealand entomologist Ruud Kleinpaste.

Mick has had the good fortune to circle the globe several times over. While filming Raising the Mammoth in Siberia, he flew under conditions most of us would never even dream of. He traveled to South Africa for the production of Into the Lion’s Den, and, at the Mahout School Thailand, he trained to boss huge elephants around. Mick told me that one of the central moments of his life was when he learned to successfully control the actions of those massive creatures. His special connection with these animals carried over into his role as Executive Producer of The Secret Life of Elephants. Kaczorowski combines his love for travel with his work, frequenting such far-flung spots as Burma, Paris, Laos, Rome, Argentina, Southeast Asia, London and New Zealand. He even traveled to the Vatican in conjunction with the filming of Pope John Paul’s last visit to Poland.

When it comes time to relax and leave the cameras and scripts behind, Mick can be found boarding a plane for Thailand. As our interview was drawing to an end, he quietly revealed to me that his first visit there transformed his life in a very personal way. The ancient culture, firmly rooted in the earliest Buddhist beliefs and customs, deeply influenced his love (and natural talent) for photography and art. He is accomplished in both fields, and has amassed an impressive collection of striking photos and inspiring artwork. A visit to Mick’s home is like a stroll through an art gallery, with Thai-inspired handiwork nestled among the framed photos and canvasses.

Oh, and for those of you keeping track, Mick did finally return to the University of Michigan to finish out his degrees in both film and psychology. As a veteran explorer, Rehoboth Beach resident Mick Kaczorowski has battled forest fires, ridden elephants, strolled with the dinosaurs, hobnobbed with lions, cruised aircraft carriers and burrowed with the meerkats—sharing his adventures with millions of TV viewers every step of the way. As this goes to print, Mick’s off to Morocco to explore even more of the world. No cameras this time—except for his own.