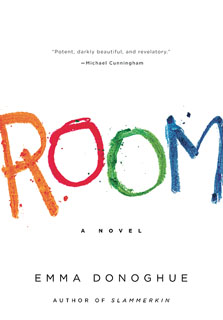 The chair is your New Favorite Place.

It used to be the sofa, before you moved stuff around. Now everything’s different and the lighting is better over where the chair sits. You moved a table here, a bookcase there, angled the rug, and the room looks amazing.

Funny how a little furniture-moving can be such a pick-me-up. But in the new book Room by Emma Donoghue, there’s no redecorating for Jack and his Ma. Their entire world is literally eleven-by-eleven foot square.

For his fifth birthday, Jack really wanted a cake with candles. He wanted other presents, too, but what he got was a pencil drawing of himself, sleeping. He hung it in Wardrobe, so it would be the first thing he saw when he awakened. That way, too, Old Nick wouldn’t see it.

Being five is good because five is Jack’s favorite number. Someday, though, he’ll be six and maybe he can go through Skylight into Outside and visit Dora and SpongeBob. Jack sees things on TV—things like people and cars—but they’re not really real.

Every day, he and Ma play games like Hum, which doesn’t need a mouth. There’s Phys Ed, but they have to move Rug and Table for that. There are other games they play, and Ma sometimes reads to him from the handful of books that Old Nick brought them on Sundaytreat.

Ma would ask for more books, but she says Old Nick would get mad.

Some days, when God’s Yellow Face shines in from Skylight, Jack begs for stories. But one day, Ma tells him a tale that can’t possibly be true.

Seven years ago, Ma said, she was a nineteen-year-old college coed with a brother and two parents. When a man asked for help finding his lost dog, she went to his aid and he grabbed her. Thrown into a soundproofed, climate-controlled shed with sparse furniture and basic amenities, she was at the man’s mercy.

He visited a few times a week. He brought her what she requested, as long as she behaved. He knew when she birthed his son.
But an eleven-by-eleven foot Room is nowhere for a growing boy….

And I wish I could tell you more. I wish I could explain the nuances of this book, and the beauty, and all the things you might ponder if you’d spent your entire life in an enclosed space. Instead, you’ll just have to trust me when I say that Room will be one of the best books you’ll read this year.

Author Emma Donoghue does a stellar job in giving voice to a five-year-old who knows no slang except what he learns from his mother and TV. Be warned that this takes some getting used to, but in the end, I had to repeatedly remind myself not to cheat and look ahead, so compelling is this story.

If there is only one spot in your life for a book this winter, pick this one. It’s a novel you’ll definitely want to make Room for.