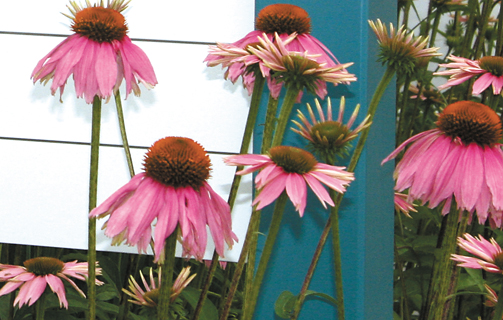 In the CAMP Rehoboth Community Center Courtyard there is a large patch of Echinacea. In the early part of the summer season, their big coneflower blooms nodded a gentle greeting to all the passers by. Now, the flowers have mostly been cut back, with only a few of the dark prickly seed pods still remaining on the stalks.

One morning I was watering the plants in the Courtyard and I picked up one of those pods and scattered the seeds it contained back into the flower beds. In a bare spot I took a stick and loosening the dirt, poked the seeds down into the soil. Since then, whenever I walk past that bare spot, I feel a little sense of expectation, and I wonder what will happen when the springtime comes once again.

This summer a large number of young people came to CAMP Rehoboth for the first time. Meeting them made me feel some of the same expectation I felt when planting those Echinacea seeds, and I’ve wondered on more then one occasion if I was meeting the future leaders of CAMP Rehoboth. Who among them, I thought, might come back someday filled with the vision and leadership skills to lead this organization into a future we can only dream about now.

In recent days, the proliferation of gay teen suicides has made me think a lot about the future role of CAMP Rehoboth and what we need to challenge ourselves to achieve. Places like CAMP Rehoboth and our Rehoboth Beach community and other “gay ghettos” are not the final answer; they are seeds that need to be scattered far beyond the boundaries of our little paradise.

No matter how many laws or legal judgments are passed in our favor, cultural change still only comes when we connect to the hearts and minds of the neighbors around us. What would happen, I wonder, if we took a little seed of CAMP back to our hometowns: if each one of us created a little outpost of CAMP spirit—of CAMP hope.

That kind of spirit and hope is born every time someone has the courage to come out of the closet: at church meetings; on college campuses; in the workplace; in government agencies; on the sets (and in the plots) of our favorite movies and TV shows; and, of course, to our friends, families and neighbors. If everybody came out everywhere, maybe, just maybe, a few young lives could be saved—and a few less people would have to spend years of their lives looking for healing from the deep injuries that come from being locked inside the confines of a dark and lonely closet.

A recent Glee episode dealt with issues of faith. Some of the kids were deeply spiritual and others confessed they did not believe in God at all. Still, the writers managed to turn a show that is not always known for its storyline into a relevant discussion of faith in our culture.

Interestingly, it was the gay character Kurt (played by Chris Colfer), who did not believe in God. In my youth, I went through a period when I felt the same way. Years later I understood that my unbelief had come as a defense mechanism against the churches who would not accept me for who I am. That same tension is still present in the “culture wars” that continue to pit gay people against conservative religious groups all over the world. Perhaps that is exactly the place where we have the most opportunity to plant seeds of healing that will eventually prevent the kind of teen suicide in the news today.

Over the many years that I have been involved with Epworth United Methodist Church, I’ve witnessed the amazing unfolding that comes when a church opens it doors and embraces everyone. Was it an easy process? Certainly not. Has it made a difference in this community? Without a doubt. Every week new people come to Epworth—gay and straight. They come because it welcomes them for who they are, just as they are.

I’m not big on pushing one’s beliefs on others, but I have to say that the turning point of my life came when I understood that God and gay were not exclusive of one another. That in turn, started me on the road that eventually led to Sundance, and to CAMP Rehoboth, and even back to church at Epworth.

Funny isn’t it: admitting I was a Christian, for me, was more difficult than coming out of the closet about being gay. That’s what the culture wars do to us. That’s the message that comes from both sides. Choose one.

Wounded spirits come when we try to separate our lives into little compartments. Only when we fully embrace all aspects of ourselves—the ones we like and the ones we don’t—will our whole person be well. The same holds true for our culture—until we stop hating one another for our differences, we will never be able to save the 24,000 children who die in the world each day, or save the oceans and forests that make life possible, or simply stop kids from dying because thay are afraid to find out who they really are.

That seed pod I mentioned earlier contained uncountable seeds. It reminds me of the many opportunities each of us has each day to plant seeds of change and hope in the world around us.

Murray Archibald, Founder and President of the Board of Directors of CAMP Rehoboth, is an artist in Rehoboth Beach.