Spectacular Sundance Auction Cruise From Accent On Travel and Celebrity

Accent On Travel has put together a phenomenal vacation opportunity for the Sundance Auction on September 1. The winner will enjoy a cruise for two on a Celebrity Cruises Solstice Class Ship to one of over 30 itineraries. The 10-14 day cruise includes stateroom with private veranda, port charges, and taxes, plus $1,000 toward airfare, shore excursions, or shipboard credit. Don’t miss out on this trip!

“The little pink house represents what we have and should not take for granted: our safe haven that can so easily be lost by unemployment, health, and natural disaster. It is a symbol of our evolving landscape where families come in many different forms, and our homes are filled with many types of love. These paintings are to remind us to be thankful and be hopeful.”
Isner’s work is inspired by music, social events, and pop culture, and he describes his work as folk-pop-art. “I love to use bright, happy colors intertwined with graphics and shapes for whimsical story telling.”

The Little Pink Houses show was done in acrylics on both canvas and paper. Though the theme of little pink houses is obvious throughout his work, there are two distinct styles Isner uses to tell his story. His paper and acrylic pieces were inspired by pop artists like Keith Haring and Britto, while his acrylic and canvas pieces take on a more folk art style, creating a new perspective on landscapes. 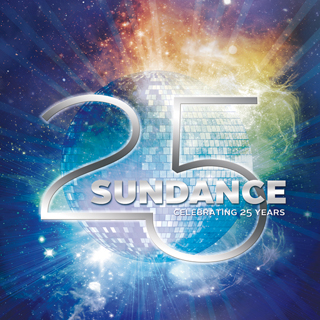 Don’t miss Sundance 2012: Legend of the Silver Rainbow—the end-of-season two-night extravaganza at the Rehoboth Beach Convention Center on Labor Day weekend. Saturday, Sept. 1 is the Auction—silent and live—with hundreds of amazing items, plus great food and drink. The Dance on Sunday, Sept. 2 features music by Saint DJ Mark Thomas and lights by Paul Turner. Tickets are available at camprehoboth.com or by calling 302-227-5620.

Mel Damascena celebrates the Coffee Mill’s 20th anniversary with the Today Show’s Hoda Kotb. The two joined forces at the event to raise funds for the Delaware Breast Cancer Coalition. 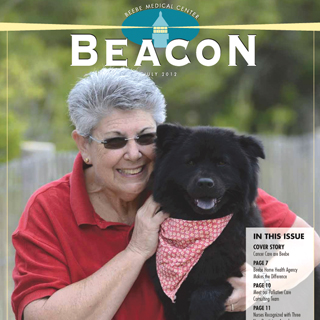 Natalie Moss Is Featured in Beacon

Cancer survivor (and CAMP Rehoboth treasurer) Natalie Moss, and her friend Lucilu, were the cover story of the most recent issue of Beebe Medical Center’s Beacon magazine. Photo by Kevin Fleming.

Letters Travels Around the World\

Christine Hesser and Margaret Mary Burke cruised from Sweden to Finland, Russia, Estonia, Latvia, Gotland, and Germany, before ending in Denmark, and Letters was with them all the way.

Zumba for Fun! For People Affected by Cancer

On Mondays for the month of August at 12 Noon the Cancer Support Community-DE will present Zumba for Fun! Make Zumba for Fun! part of your weekly journey to better health. This movement class for people affected by cancer is designed to be approachable for everyone regardless of fitness level. Stacy Fulton will guide you through easy -to-follow moves to great music. The intention of this class is to move a little and have a lot of fun, even if you don’t perform each move perfectly. This program is part of the Finding Strength Together Series and is made possible by a generous F.A.C.E.S. grant from the Carl F. Freeman Foundation.

Mary McElhone and Nancy Kaiser (top) celebrated their marriage with a party at Cultured Pearl in Rehoboth. Lauren Nangle and Jennifer Law were married in New York’s Central Park, July 28. Congratulations to both couples.