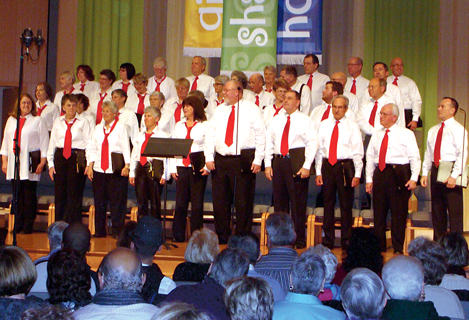 The CAMP Rehoboth Chorus looks forward to launching its fourth successful season this month with a new Music Director, a rousing collection of Broadway songs, and a commitment to grow and diversify its membership.

This year, the Chorus welcomes Doug Yetter as its Music Director. Doug is also Artistic Director and Co-Founder of Clear Space Theatre Company in Rehoboth Beach. He has excelled in the theater business for 40 years as a director, composer, actor, conductor, arranger, and theater owner. Joining Doug is David Zipse, who returns as accompanist. David has been called a “virtuoso” by leading music critics, and has conducted and produced many musical productions. He is a popular performer at area restaurants, clubs, and at the Rehoboth Beach Jazz Festival.

The theme for the new 2012-13 season is Broadway Our Way, featuring some of the most beloved hits from The Sound of Music, Hello, Dolly!, Carousel, West Side Story, South Pacific, and more.

The annual concert will be held Saturday, February 2, 2013 at 7 p.m. at Epworth United Methodist Church in Rehoboth Beach. The 2012 concert, also at Epworth, received rave reviews from the sold-out crowd of more than 400.

In related news, the Chorus has received a major grant from the Delaware Division of the Arts. The grant is targeted toward hiring professional musicians to enhance the quality of productions and extending the Chorus’ outreach program to other areas of the state.

Rehearsals are underway for the current season, but officially begin September 17 at the CAMP Rehoboth Community Center, 37 Baltimore Avenue, Rehoboth Beach. They are held each Monday from 6:30 p.m. to 8:30 p.m. until the concert. During spring and summer months, the Chorus performs outreach concerts at local senior centers and senior living facilities.

The Chorus has added many talented new voices this season and continues to expand beyond its current membership of approximately 50 singers.

“We welcome new singers and we’re open to all, gay or straight, young or old—we just want to attract people who love to sing,” said Mary McElhone, President of the CAMP Rehoboth Chorus Leadership Committee. “The ability to read music helps, but is not required. There are no auditions, except possibly for placement into the soprano, alto, tenor, or bass sections.”

She added that the Chorus reflects CAMP Rehoboth’s vision to “Create a More Positive Rehoboth” by reaching out to all, and bringing the community together through song.

There is an annual registration fee of $60 to help defray the cost of music and other expenses. For more information about membership, please contact Chorus Secretary Bob Hoffer.

The CAMP Rehoboth Chorus’ program is made possible, in part, by a grant from the Delaware Division of the Arts, a state agency dedicated to nurturing and supporting the arts in Delaware, in partnership with the National Endowment for the Arts.