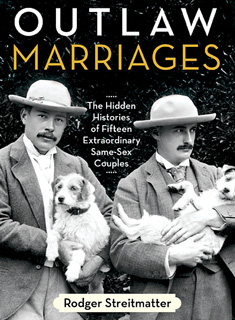 Something old, something new? More of the first, as you’ll see in the new book Outlaw Marriages by Rodger Streitmatter.

For more years than you care to count, you’ve been fighting for the right to marry the one you love. It seems lately, though, that the only progress you’re making is backwards, and that’s disheartening. But years ago, gay men and lesbian women didn’t let a little discouragement stop them from enjoying “sub-rosa marriages.” Instead, they boldly “flouted convention.”

In 1865, for instance, 45-year-old Walt Whitman fell in love with a handsome 21-year-old streetcar conductor. Until that time, Whitman had a hard time getting his poetry noticed, but falling in love had a “powerful impact” on his work. Peter Doyle became the older man’s muse and was devoted to Whitman until the poet died.

Ned Warren and John Marshall were kindred spirits, too.

Both were obsessed with antiquities and had a passion for procuring them for U.S. museums. But though Warren loved Marshall, he didn’t want to be monogamous and then Marshall was forced to marry a woman. Mary Bliss-Marshall knew the score, though, and was happy to let her husband share his bed with Ned Warren. She was also happy to join the two men in procuring more antiques.

But, as with any modern union, things didn’t always go well in an outlaw marriage. Sometimes, break-ups were inevitable….

Greta Garbo was a diamond-in-the-rough when Mercedes de Acosta met the new starlet, but under de Acosta’s tutelage, Garbo learned manners and poise, flourished, and succeeded. As a screenwriter, de Acosta did everything to ensure that her lover got good roles and major accolades.

The problem was that de Acosta couldn’t keep anything to herself, and she blabbed their secrets in a tell-all book. That was when Garbo coldly told de Acosta to get lost.

Let’s start with the bad news: at just over 200 pages, Outlaw Marriages is barely longer than a Kardashian wedding. The good news is that it’s just as rich.

Mixing history, some old-fashioned scandal, and plenty of star-power, author Rodger Streitmatter not only gives readers a sense of the times in which these “outlaws” lived, but also— and this is pretty amazing—an idea of the tolerance that they enjoyed.

In some cases, the media kept mum about the marriage (which, technically, in all cases in this book, were not strictly “marriages”) and in other cases, the situation was public knowledge but few seemed to care.

Outlaw Marriages is the kind of book you’ll be disappointed to see end because it’s so much fun. And do I recommend it…?
I do.