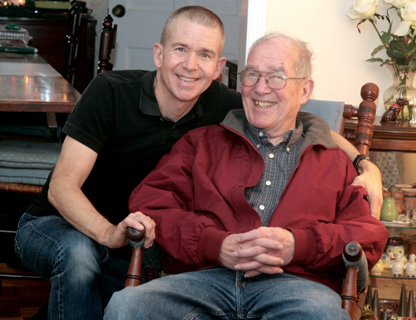 My dad taught me many things when I was growing up, and I’m quite sure I didn’t appreciate those lessons way back then. I do now.

We called him Daddy until well into our adult lives; once my nieces and nephews were born he was also Pop. Until he retired, Pop was a minister in the North Alabama Conference of the United Methodist Church. He loves nature, always has. Even now, when walking has become difficult if not impossible, he still, I’m quite sure, finds comfort in the strength of the Tennessee River flowing within sight of the retirement apartment where he and my mother now live.

Pop’s love of the great outdoors was evident all our lives, and the whole family spent many happy, if hectic, vacations camping across this beautiful country of ours. Pop was also a Scoutmaster, and used to take me along on scout expeditions, even though I was too young (and too gay?) to be a Boy Scout. Back then he took slides of all our vacations and Boy Scout trips. We found one of those slides a few years ago: it showed his whole Boy Scout troupe with camping gear, standing beside the bus that was to carry us all into the Smokey Mountains. There I was, right in the middle of all those older boys, hands and arms in full “ta da” extension, in the gayest pose possible—and with a huge smile on my face!

Over time, of course, I realized I was gay, and came out to my dad. It was the late 60s/early 70s, and I was a rebellious, hippy theater student. If he was disturbed by my revelation, he never let it show. Over the years, he was a minority voice in his southern, Methodist denomination when it came to gay issues. It wasn’t until years later that I understood that he had stood up for me in a way that could have seriously jeopardized his career. He always loved me and supported me. When I met Steve, he was instantly a part of the family.

Our CAMP Rehoboth is not quite the same as camping with my dad, but I often think of how they are connected. Rehoboth, after all, was founded as a Methodist Church campground. One lesson stands out above all the rest, and Pop would say it to Boy Scouts and family members alike. ”Always leave your campsite in better shape than you found it.”

That statement has stayed with me all my life, and is, I think, a great motto for us here at CAMP Rehoboth, and for all of life. If each of us did that with all aspects of our lives, the world would be a changed place. From the destruction of our oceans and forests to eradicating poverty and homophobia, we need to take responsibility for our “campsite” and for our home world.

Leaving something in better shape than we found it has always been at the heart of the CAMP Rehoboth mission and vision—without us even realizing it. Our goal has been to build a safe and inclusive community with room for all, and to work with other organizations to do everything from providing AIDS related support to environmental projects “for the general betterment of the community.”

Yes. Always leave your CAMPsite in better shape than you found it!

Recently, JC Penney produced an ad for Father’s Day that features a household with two dads. Once again the One Million Moms (who are apparently only about 40,000) are riled up and threatening a boycott. (They’re also, by the way, upset about Marvel Comic’s superhuman mutant Northstar getting hitched to his long-time boyfriend Kyle, but that’s a different story.) JC Penney’s two dads join the store’s two moms ad, and spokesperson Ellen DeGeneres on the OMM list of “thou shall nots.”

Why the love of two dads could possibly be bad, is beyond the understanding of most of the readers of this magazine, but it does serve as a reminder that some “campsites” are a whole lot messier than others. Changing deeply rooted beliefs is not an easy thing to do, but every time one of us comes out of the closet and embraces who we are, we leave our little corner of the world—our campsite—in better shape than we found it.

Pop suffered a stroke several years ago. The effects of that stroke plus Parkinson’s disease have made speech very difficult for him. To someone whose life and work was all about communication, it has been devastating. Pop doesn’t say much anymore, and phone conversations are not what they used to be. I think he knows how much we all love him; I hope I’ve taken the time to let him know how grateful I am for his love and support and the many lessons we learned on our camping trips together.

Yes, Pop, I’ll do my best to leave this CAMPsite in better shape than I found it. Happy Father’s Day!