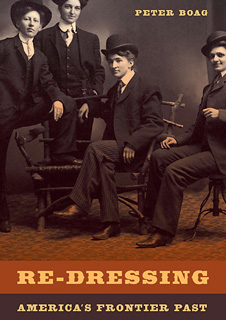 The outfit was beyond your budget.

It was impractical, too, because you’d probably never wear it. It looked great on, it fit just right, it was so perfect, but it would just hang in your closet. Still, you couldn’t whip your credit card out fast enough.

Do clothes make the (wo)man? Are we what we wear? In the new book Re-Dressing America’s Frontier Past, author Peter Boag, proves that those questions plagued our ancestors more than history admits.

The fall of 1903 was short and winter came early. Tough and self-sufficient, Joe had come to the Mallory ranch complaining of illness and he didn’t look good. Shortly after his arrival, he died in the warmth of his neighbors’ home.

The shock came when they went to prepare Joe’s body for burial: Grizzled Joe Monahan was a woman.

Peter Boag says that such scenarios were common in the West in the decades between 1850 and 1920. Cross-dressers, for myriad reasons, were “very much a part of daily life…” and while people tittered and talked, general attitudes were based on late-19th-century beliefs on gender. Medical experts eventually claimed that cross-dressing was part of a “neurological disease” called homosexuality, and “…homosexuality was understood as an unfortunate by-product of modernization.”

But button-holing wasn’t so easy.

For women, the frontier was a man’s world. There was adventure and prosperity there, and becoming a man as much as possible was a way to seize opportunity. Safety was another reason for appearing masculine, cross-dressing could be scandalous fun, and it could help escape punishment for criminal behavior. There were also women who believed themselves to be boys from birth.

For smooth-faced men, it was common to dress as women for dances and parties because biological women were scarce. Men impersonated women to entertain others. In some Native American communities, “berdaches” were encouraged to embrace femininity. Like some women, males took on girlish appearances to escape crime, and then there were the men who simply wanted to “be” women.

But for those men, and their female counterparts, life wasn’t easy.

Being arrested for the “crime” of wearing clothes for the opposite sex was common and cross-dressers were often shunned. Interestingly, however, their partners (usually same-sex) were generally socially accepted.

Re-Dressing America’s Frontier Past is good, but long.

Author Peter Boag offers lots of excellent examples to back up his reasoning behind why these stories are largely hidden from history, and what he found will set western fans (not to mention screenwriters) on their ears. This is fascinating stuff, on many levels.

And yet—the book has its distractions. It’s very scholarly and often reads like a dissertation, which occasionally makes it hard to read if you’re just looking for a peek at hidden history and not a lecture.

That aside, because it uncovers a wealth of stories that are overdue for telling, I liked Re-Dressing America’s Frontier Past and I think you will, too. If you’re a Western History buff especially, you need to outfit yourself with this book soon.