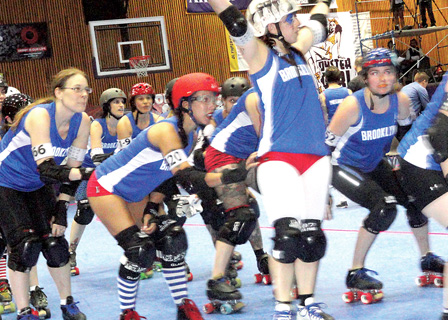 Lapping the Track on Eight Wheels and a Prayer

There could not have have been two New York City episodes further separated in style and substance than the two I experienced two weeks ago. That they both involved my idol Angela Lansbury is by turns odd and exhilarating.

First, for the sublime: I went to see the revival of Gore Vidal’s The Best Man, a brilliant political drama taking place in the 1960s which is as relevant today as it was then. Scary. The smallest star role was Angela’s as a flag-waving Southern political committee woman. She was, of course, charming, funny, and perfect. But the show’s big attractions were James Earl Jones, John Larroquette, Eric McCormack and Candice Bergen, so how could the show have been anything but brilliant and electric? It was a theatre-lover’s grand slam.

Then we moved from sublime to ridiculous: The Gotham Girls Roller Derby.

When I was told to wear closed toe shoes if I was going to sit in the front row for the grudge match between the Manhattan Mayhem and the Brooklyn Bombshells, I should have known better. Holy rollers!

The match took place in the gym at Hunter College in Manhattan, where hundreds and hundreds of fans piled in to watch their favorite teams skate it out. The all-women teams had both male and female cheerleaders, and the crowd was nothing if not freakily diverse. Young, old, gay, straight, cheering, and screaming for their favorite skaters.

The athletes, a combo of gay and straight it seemed, dressed in hottie outfits of scanty panties or bike shorts and long tees over black three-quarter tights, plus knee pads, elbow pads and helmets, transported themselves not on roller blades but on the old-fashioned four-wheel models. Pumping their arms, sometimes their chests, and flying around the track like lightning, it was a sight to behold…and to duck for cover from.

From the program: “The objectives of roller derby are relatively simple. Each team fields a single point scoring skater (“Jammer”) whose object is to lap as many opposing skaters as they can. The remaining skaters who aren’t scoring points work both on offense and defense at the same time—to block the opposing Jammer and to clear a path for their own Jammer. Well-played roller derby requires agility, strength, speed, control, peripheral vision, communication, and teamwork.”

Also cursing, screaming, bleeding. I haven’t seen such aggressive women since 1978 at the Phase One bar on 8th Street in D.C. And the tattoos! There hasn’t been so much ink since John Hancock wrote on parchment.

Every time the gals started a round (a jam), they’d whiz by so fast, first you’d get windburn, then be whipped silly by a tailwind. Round and round they’d skate, uttering taunts, maneuvering bodies, sly elbowing (Foul!) with order trying to be kept by a cadre of striped-shirted referees, mostly male. The penalty box was always, always full.

When somebody went down, lots of folks went down, with wheels spinning, women cursing, and fans cheering. It was less a blood sport than ice hockey, but not by much. The platoon of refs kept everybody pretty much in line.

I think the best part for me, was the roster. The skaters boasted names like Ann Phetermean, Bitch Cassidy, Megahurz, Raggedy Animal and such for the Mayhem. The Bombshells had Amesto-Maim, Bonita AppleBomb, Violet Knockout, Ann Frankenstein, and, as a writer familiar with the printing biz, my favorite, Em Dash.

These powerfully built, strong, independent women obviously had a blast doing derby in big, bad New York and it was a hoot to watch.
Luckily, no personal podiatry was required as a result of my sitting right at the action. Each time the jammers and their entourage flew by, often within an inch or two of my shoes, I’d scrunch my feet back and pray. When a pile-up of sweaty, butch gals landed at my feet I didn’t know, as they sort of say, whether to sit or go blind.

But when I came knees to knees with one particular skidding skater, my night was complete. Right there, practically in my lap, was Angela Slamsbury.
As the sign I saw on my way out of the city said: If You Can Make It Here…You Really Should. From gritty political drama to death-defying roller derby, I was a great big part of it, New York, New York.