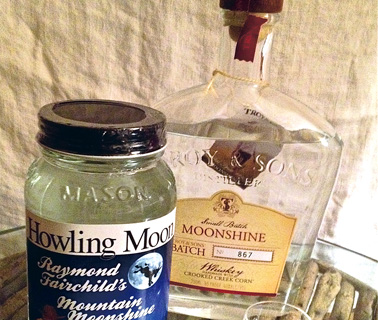 My dear friend Marilyn Margaret arrived from western North Carolina for the launch of my new book last weekend bearing not one, but two bottles of moonshine. It’s not the first time she’s run some “white lightning” to Rehoboth.

Several years ago, she presented me with a very special jar distilled by none other than the legendary bootlegger Marvin “Popcorn” Sutton. Known for making the best “corn squeezins” around, Popcorn got himself in some trouble selling to the feds. A few days before heading off to federal prison, he hooked a pipe up from the exhaust of his Ford Fairlane and asphyxiated himself. Live free or die, I suppose.

Now, if you’re thinking Marilyn Margaret is some sort of toothless hillbilly in a tube top, you would be wrong. She’s actually quite elegant, tall with red hair and porcelain skin. A debutante of the Asheville Rhododendron Royal Brigade of Guards. A graduate of Mr. Jefferson’s University! The girl just has a taste for “corn likker.”

Truth be known, she was a tad sheepish about presenting the two bottles. It used to be you had to know someone who knew someone in order to get some good “popskull.” Now, you can buy moonshine in just about any liquor store in Asheville. There were, she pointed out with disdain, barcodes on the bottles.

Yep, “hooch” has gone trendy, part of the artisanal spirit boom sweeping the country hand in hand with the whole farm-to-table movement. The fancy-pants, legal moonshine that Marilyn Margaret brought me was distilled by Troy and Sons, an Asheville-based company that prides itself on its small batch, high quality, moonshine made from heirloom corn. People are paying attention and using moonshine in cocktails such as margaritas and Bloody Marys. Troy and Sons has been featured on CBS This Morning, in Garden & Gun magazine, and in newspapers across the South. Their moonshine won a silver medal at the 2011 New York International Spirits Competition.

Perhaps I’m being presumptive, but I’m guessing most of you readers haven’t tried the “white dog.” I first tasted moonshine at the tender age of 17. My buddies and I would drive across state lines to Bluefield, West Virginia, where in a certain downtown alley older men used to sell beer, wine, and liquor to underage boys. How we ever found out about this little spot of heaven, I do not recall. We bought a jar of moonshine once and mixed it with Mountain Dew. It was a hell of a fun trip back over the mountain on old Route 52.

What you need to know about moonshine is that it is a very high proof distilled spirit traditionally made from corn. It’s rarely aged in barrels like proper whiskey, hence the clear color of this white southern whiskey. It burns going down.

Moonshine was born from the Scotch-Irish migrants who settled into the southern Appalachian mountains in the 1700s, bringing with them knowledge and skill at making whiskey. The word is believed to derive from early smugglers and illegal distillers who clandestinely produced and distributed the whiskey by the light of the moon. When Prohibition settled upon the nation, demand for moonshine grew, as did its reputation. While it was easy to hide illegal stills in the mountains, it wasn’t so easy to transport the product. Young men, therefore, began souping up their cars to outrun the police. This was the origin of southern auto racing—today’s NASCAR. Many early race car drivers had been bootleggers.

“Hillbilly Pop” has a questionable reputation. Sip from a bad batch, they say, and you’ll get lockjaw or go blind. That’s mostly myth, left over from Prohibition when shoddy product was indeed delivered to Eastern cities. Yes, there are some health concerns, mostly from contamination because traditional moonshine was produced illegally and without any inspection of the product quality or the manufacturing process. Moonshine is illegal when produced outside of the law, without a license, and when no taxes are paid on the product.

Troy and Sons claims you can taste hints of vanilla and melon in their legal moonshine. None of us sipping it on my screened porch last Sunday night tasted any of that. All we got was the burn. We moved on to Raymond Fairchild’s Howling Moonshine for comparison. Fairchild is a bluegrass musician and a fifth generation moonshiner who produces his “mule kick” using all natural ingredients and a 150-year old recipe. It wasn’t as smooth as Troy and Sons, but it was a higher proof, both of which pleased Marilyn Margaret.

After a couple of shots, my face went numb. I started stuttering and laughing, and experiencing a heightened sense of hearing. The bugs bouncing off the screens seemed enormous, and the more we drank the bigger and louder they got. This buzz was good. All the nicknames I’d heard about moonshine now made perfectly good sense.

In case you want to try some “donkey punch,” you should know there’s none to be had in Rehoboth or Dewey Beach, for that matter. I’ve checked the liquor stores. The closest I can find is grain alcohol, but that’s just tacky. This latest bout with moonshine got me thinking maybe I ought to get in on this renaissance. I have a big basement. And, I sure could use some supplementary income, because I seriously doubt I can support myself in the manner I have become accustomed to just on book sales. I even have a Rehoboth-centric name for my moonshine: White Bench Whiskey, so strong it knocks you on your ass and you just gotta sit down.

Moonshine and tonic anyone? What could go wrong?

Rich Barnett is the author of The Discreet Charms of a Bourgeois Beach Town.